It’s the peak that always makes me stop and look up in awe. Though it was probably an important site guarding a trade route once upon a time, warning the mighty Marathas of approaching enemies, there is not much left of Irshal today. Even then, it’s an exciting trek. Also known as Vishalgad (370m), Irshal looks like a cardboard cut-out, its two pinnacles resembling a pitch fork, and the large hole in the centre of the rock clearly visible from miles away. If you’re not an experienced rock climber, do not take the risky route to the top. Instead, take a safer hike skirting the base of Irshal and walk across the ridge to Prabal Fort (707m). The British once considered Prabal a salubrious site for building a hill station, but the lack of water forced them to move across to Matheran in the north-east instead. The fort itself is in ruins, and overgrown by jungle, making for a very interesting walk.

Alight at Chowk on the Mumbai-Pune Highway (NH4), at what is better known as the Matheran-Karjat turn-off. Walk along the highway towards Mumbai, due west, for a little more than a kilometre and take a right turn, due north-west. Follow a footpath that will lead across a couple of fields, across the new railway line and then up a long gentle spur. It’s an easy 3-km walk up the spur to the plateau and to Irshalwadi, the village at the base of Irshal. The pinnacle of Irshal rises from the middle of the plateau like an impregnable rock fortress. The trail to the top goes around the left (due west), across the ridge and then due north, to the other side of the hill (ensure the cliff walls are to your right). Then a narrow path climbs very steeply up a rock face and brings you to the hole in the rock. This trail continues a little further and brings you above the hole to an opening between the two pinnacles. There is one water tank with good drinking water available. If you go left from this gap, you will come to the base of the pinnacle. 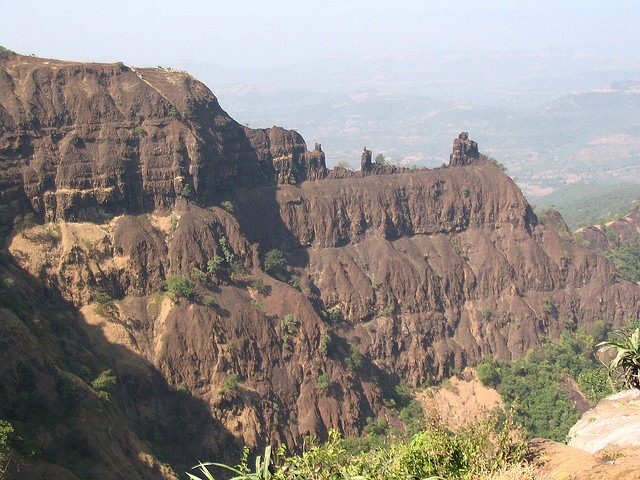 On the left of the rock face is another water tank and a very small natural cave-like shelter. The route to the summit involves a 10m rock climb to a sloping, exposed section full of loose scree. A small hole has been created in the rock face to anchor a rope, but this by no means reduces the danger. Do not attempt this climb alone or if you have no prior climbing experience The view from the hole in the rock is breathtaking as much as it is fearsome, for you are on a very narrow stretch and there is often a strong breeze. On the rock wall, you’ll find a stone plaque in memory of a climber who fell to his death while attempting the climb to the pinnacle. Descend by retracing your steps to Irshalwadi. If you’re tired, you could camp out at Irshalwadi. Else, trek up to Prabal Fort and camp at the Ganesh Temple.

The ridge connecting Prabal Fort is due northeast and will take you to the lower plateau of the fort. Just before the start of the ridge, you’ll find a spring, which has good water, though this usually dries up by the end of winter. The walk across the ridge can take 21/2-3 hrs and will bring you to the lower plateau of Prabal Fort. From this plateau, the trail moves due north along the base of the fort (ensure the fort is to your left). The route into Prabal fort is over a faint trail up a steep gully into the fort (1- 11/2 hrs).

Look out for the petite mouse deer that is found in and around Prabal. Along the way there is a water tank but this does not have water all the time. The top is initially covered with dense jungle, filled with karvi bushes and trees. The trail will lead through the forest and bring you to a Ganesh Temple. Not much is visible through the dense undergrowth and getting to the edge for a view is a little tricky. It is advisable to take a villager from Irshalwadi as a guide (they’ll charge around Rs 100-150) 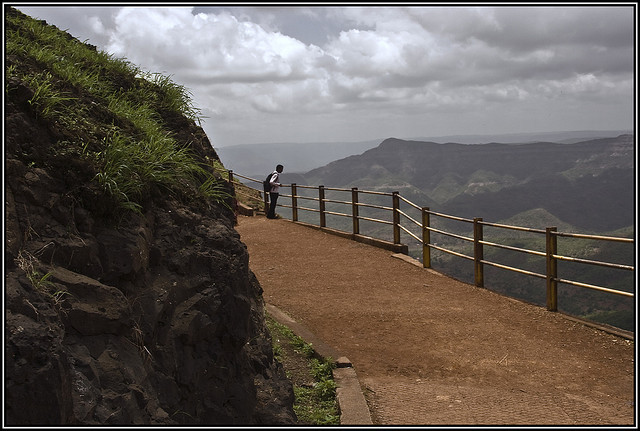 From the Ganesh Temple, a faint trail leads north (1 km) and brings you to another entrance of the fort. On the opposite side is a pinnacle (due north) connected to Prabal by a col. A flight of steep rock steps leads out of the fort and down a spur to this col (1/2 hr/ 1 km). From the col, turn left or southwest and then descend via a gully to Thakurwadi (1-11/2 hrs). From here, it’s another half an hour to Vardoli Village from where you can get transport (opt for either an ST bus or autorickshaw) to Shedung, located on NH4. Panvel is about 8 km away, and from there you can get a bus or local train on the Harbour Line back into Mumbai.

There are several options available depending on the time you have. 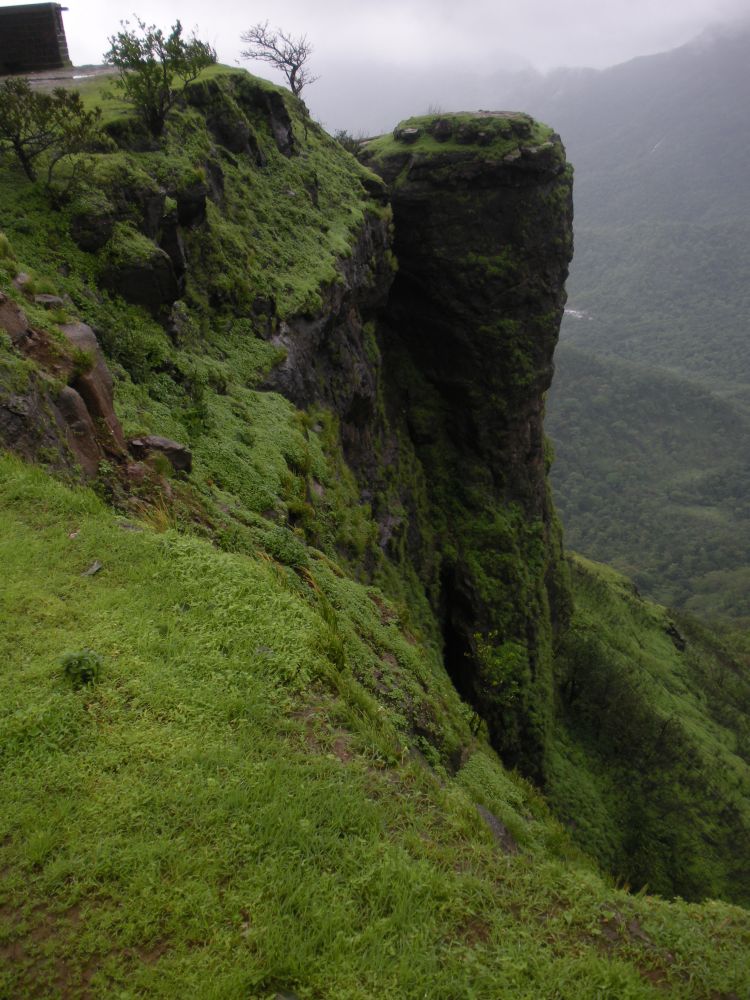 ● You can start your trek at Vardoli and Thakurwadi and climb up to Prabal Fort first and then come across to Irshal. From here, go down to Varosa Village in the north-east and from there to Matheran via Shivaji Steps.

● Proceed as above and then continue the trek due south to Savna Lake, Manekgad, Sankshi and Karnala Fort. Factor at least 2-3 more days into your plan.

● There are two lakes, Nadhal and Pazar, in the vicinity of Irshal, and plans for a new dam on the eastern side. These make for interesting walks and are great places to set up camp. The thick forest around the lake is great for birdwatching too.

About the author: Andre Morris taught history at Mumbai’s Wilson  College before walking the wild side. He lives in Mumbai but spends half his life in the outdoors – hiking, rock climbing, rafting, canoeing and birdwatching. He also runs Outbound Adventure, an outdoor education and adventure outfit. 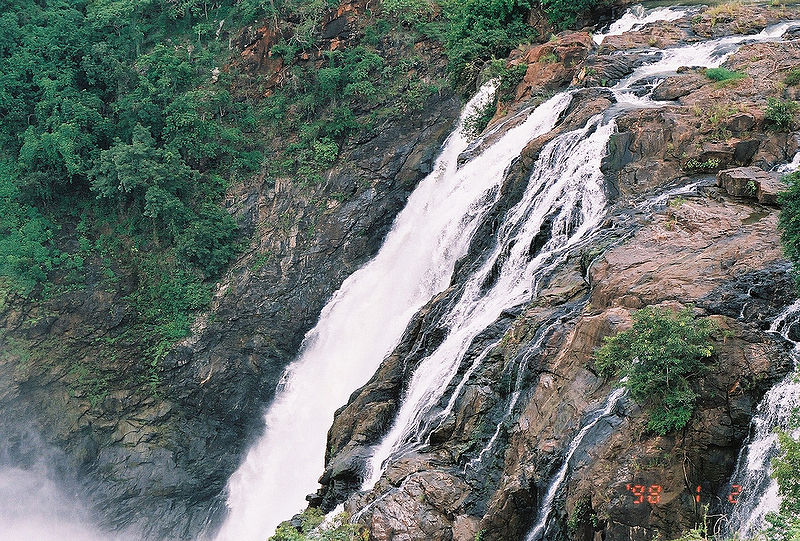