I hadn’t planned it this way, but it turns out that this sunny Sunday morning, fate is on my side. The traffic in Ahmedabad is crazy, I am told by Manish, my young, bespectacled driver. I receive his statement with the slightest touch of incredulousness because all I can see on the road are a few stray vehicles going about doing whatever it’s up-with-the first- rays-of-dawn Amdavadis do on quiet Sunday mornings. No one’s on the road as it’s a Sunday, he says. So that explains it. There are three of us on this trip. There is of course, Manish, quiet and focused, his eyes on the road, his hands upon the wheel and as far removed from a Doors’ song as it’s possible to be. Then there’s Nilesh, Manish’s friend and backup driver if the drive gets too tiring or he feels sleep coming to him while he’s at the wheel. Nilesh is the easy going, laidback and laughing Veeru to Manish’s quiet and intense Jai. And of course there’s me; navigation-impaired, prone to motion sickness and slow to talk to strangers. Yes, we’re an odd trio alright. 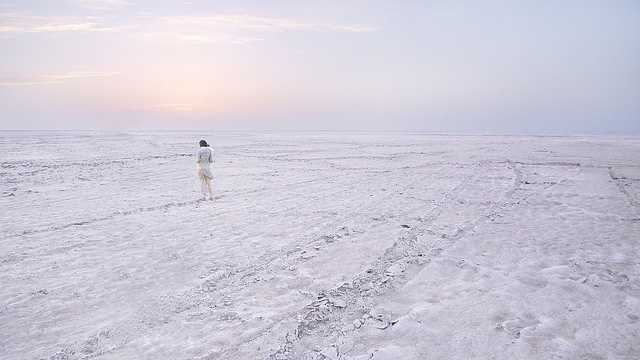 While I’ve explained to Manish that this is essentially a driving trip and I’ll be asking him a lot of questions, my first few on road names and odometer readings cause him to look a little startled. An hour later, he seems resigned to my incessant questions and no longer turns back with a startled “Kya??” at every query. As we drive over the Jamalpur Bridge that spans the Sabarmati, I can feel the excitement in me like a kernel of corn on the verge of popping. We’re on the road! This seven-day journey takes us through varying landscapes. There are the endless miles of scrubland that give you an unbroken view of blue sky meeting dusty earth with patches of green here and there to break the monotony; there’s the Rann itself, large, isolated, sparkling and beautiful and then of course there are the narrow roads that run past villages, past women wearing backless blouses and colourful lehengas (a flared, long skirt), past shepherds with wrinkled, weatherworn faces under their large white turbans and past herds of sheep, that bane of any driver’s existence.

Our journey begins as we drive out of Ahmedabad, west towards Limbdi. We catch NH8A at Sarkhej and drive on it through Chotila, all the way up to Morbi. From Morbi we head to Kutch and put up our metaphorical camp at Bhuj. It’s from Bhuj that we undertake our trips to the lesser-known parts of Kutch: the small villages outside Bhuj, to Mandvi (the port town) and the ancient, silent ruins of Dhola Vira. It is August and the monsoons are on their way out, leaving this state in a bit of a weather-limbo. It’s warm but not intolerably so, and humid – at least while you’re still in Ahmedabad; it gets much drier as you approach Kutch – and not significantly cooler at night than it is during the day. The roads are largely smooth, and as you trundle past villages, you’re quite likely to be flagged down by their colourful residents as they shyly ask to be dropped to the next village, clump of houses or temporary camp. The fact that we happen to be driving by is just a stroke of luck. Most days these villagers walk miles in the hot sun and dust, never losing their composure or even raising a sweat and I can’t help but be amazed. They have adapted so well to the conditions – their dry, arid, dusty land – that almost nothing fazes them anymore. Survivors of drought, earthquakes, famines and floods, this is possibly one of the last remaining places in the world where total strangers are greeted with smiles.

Colours of a bleak landscape

The roads through the journey are largely smooth, well laid-out and adequately signposted (though most of the signage is in Gujarati and Hindi). On the few occasions that a left looks as good as right, we ask the locals who then gather in loud groups, discuss our particular problem in rapid-fire Kutchi and then explain the solution to us in great detail. They’re a friendly lot, these Kutchis. With their outfits as colourful as their landscape is bleak. The men we come across mostly wear white. White dhotis, short white kurtas smocked just below the chest, and elaborately tied white turbans. The women, in perfect counterpoint to this plainness, wear almost every colour of the rainbow, made more stunning by the shimmering mirrors and embroidery that are the hallmarks of this region’s craft heritage. The crafts villages we visit are yet another example of the Kutchis’ cheerful acceptance of their harsh landscapes and way of life. From round mud-huts with thatched roofs, women and children emerge, trailing colour and laughter into the air. A lot of these women, who keep house and tend to livestock, are also part of a supply-chain system of NGOs that work towards spreading knowledge of Kutchi craftsmanship and make the women self-sufficient while they’re at it.

Colourful embroidery, expertly woven handloom fabrics, intricate threadwork and shimmering mirror work are some of the specialities of this region. Add to that the sumptuous, rich food that’s an essential part of Kutchi cuisine, and Gujarat becomes a must-visit on every road traveller’s itinerary. A Kutchi thali is an elaborate affair. It starts with a tumbler of buttermilk and ends only when you realise that you’re almost incapable of movement because of the amount of food you’ve gluttonously ingested. Whatever else you may or may not have to worry about on this trip, food – provided you enjoy authentic Indian cuisine – should not be on that list. History, geography, facts and myths, Kutch has a little bit of everything, much like its famed thalis. 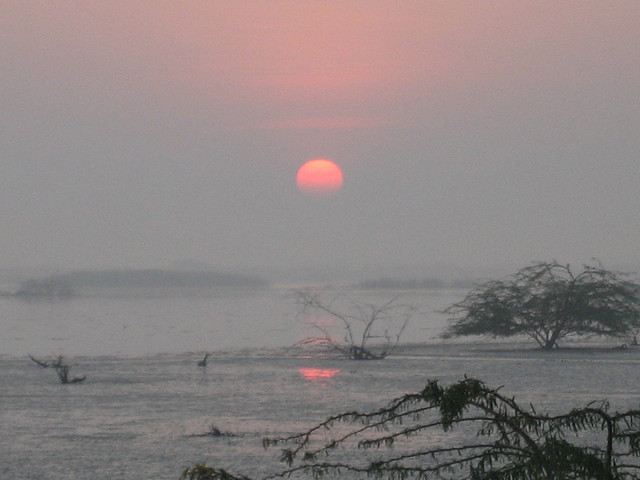 Rann of Kutch (Photo by Sgrk)

Your best friends on this journey are mineral water, plenty of sunscreen, headgear (which might, at the end of the day, save your hair from feeling like something a camel might lunch on) and Electral. Yes, that white powder is a lifesaver in a land where it’s all too easy to get dehydrated without realising it until it’s too late. You could do what I did. Carry two bottles of water with you; one pure, and the other with Electral mixed into it. Sipping from both alternately will ensure that you’re saved from the ghastly effects of too much sun and not enough replenishment. Speaking of replenishment, Kutch might house a lot of inhospitable terrain, but its people more than make up for it. We experience this hospitality wherever we go. In the villages we visit, we’re not allowed to leave a home until we’ve had – at the very least – a cup of tea or a tumbler of buttermilk.

On the day we make the foolish mistake of not tanking up before driving off, the small village we stop at to beg for some fuel proves to be full of angels in Kutchi garb. As we wait for the gentleman to fish out his little jerry can of liquid that will get us to the next pump, our vehicle is slowly surrounded by the shy yet curious locals. When Manish explains our problem to them, they walk off resolutely and return bearing water, tea – which they take pains to serve to us in small saucers – and buttermilk.

There are multiple offers of lunch before we set off but because we have to get back to Bhuj before sundown, they are turned down. As we drive off, thanking them profusely in whatever languages we know, small packages of food are thrust into our hands. It’s not elaborate stuff; two thick chapattis smeared with ghee and a few pieces of pickle, but I don’t remember a meal that I’ve received with more gratitude. Our chosen vehicle for this journey is a Qualis, which works admirably on the highways, but is insanely difficult to manoeuvre through the narrow galis of the villages. A lesser driver is quite likely to curl up on the ground and whimper at the challenge, but Manish ably backs into side streets and cuts through lanes with surgical precision while I squeal every time we dodge a mud wall by centimetres and a herd of cows by inches. While it’s a bit of a fuel-guzzler, the Qualis is well suited to a lot of the not-quite-roads we find ourselves driving through. 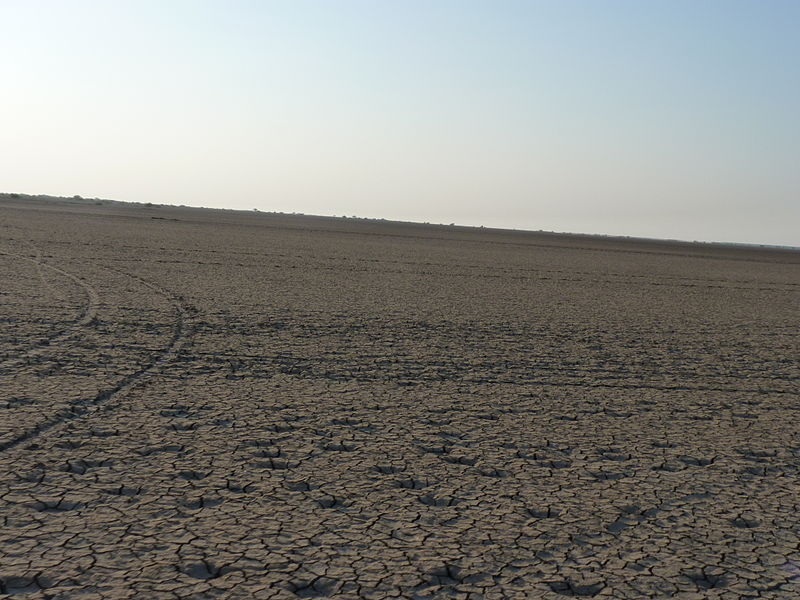 A smaller vehicle might wind through the villages with more ease, but there are some rough patches on this drive which your small car will probably never forgive you for. Years down the line, you’ll continue to hear a grating, clanking noise from your engine which when translated from carspeak is simply, “Remember that longwinding dirt track you took me through? I haven’t forgiven you for it.” Also, for certain stretches on the road you’ll almost be rubbing shoulders – or fenders more likely – with trucks, buses and camel carts. While the camel cart is easily dealt with, the trucks can get a tad intimidating. I’ll say this for them though: I’ve never seen such civility amongst truck drivers as I’ve in Gujarat. They don’t honk at you continuously, they don’t hog the road despite their bulk and they even let you overtake with nary a rude gesture. Delhi drivers could learn a thing or two from them. We drive out of Ahmedabad on the Ahmedabad Link Road – known to Manish as the Rapar-Sarkhej Road – and catch NH8A, which will serve as our mother lode through most of this drive. We pass Sarkhej, Bavla and Bagodara after which we take a break for tea at Hotel Amber.

After the tea-and-restroom break, we head off, still on NH8A towards Limbdi, via Bagodara. We drive through Sayla, Chotila and reluctantly get off NH8A at Bamanbore as we head towards Morbi. From Morbi, we head to Bhuj, passing Bhachau, Dudhai and Kukma on the way. There are two stretches of road on this journey that will test your patience. The entire 30-km stretch into and out of Morbi is trying; a large part of the road is under construction; and the last 30 km to Dhola Vira, for which the road is largely single-lane, has no facilities to speak of, and switches to dirt track quite frequently. Except for the desolate stretch from Rapar to Dhola Vira – before which you absolutely must tank up – almost all the roads on this route have more petrol pumps than you would know what to do with. In some sections, you can come across three within a 1-km radius. In the unlikely case that you are brandconscious about your fuel, you’ll very possibly find your favourite after a short drive of a few kilometres. Service stations and puncture repair shops are few and far between while on the road, but as you get closer to a town, you’ll usually find them chummily sharing boundary walls with the petrol pumps.

Divya I has experimented with a number of professions such as copywriting, content editing and web designing. She hopes to one day run a bed-and-breakfast in the hills along with an open library.