The waves come in slowly over the gentle slope of Bordi Beach and retreat even more leisurely, raising bubbles from the air trapped in the sand. Often they leave behind a tiny creature of the sea, or two, and the dogs go for it. Besides their barking, the beach is quiet for most of the day. You’ll be by yourself during those warm hours, immersed in the gossip of wind and the sea. 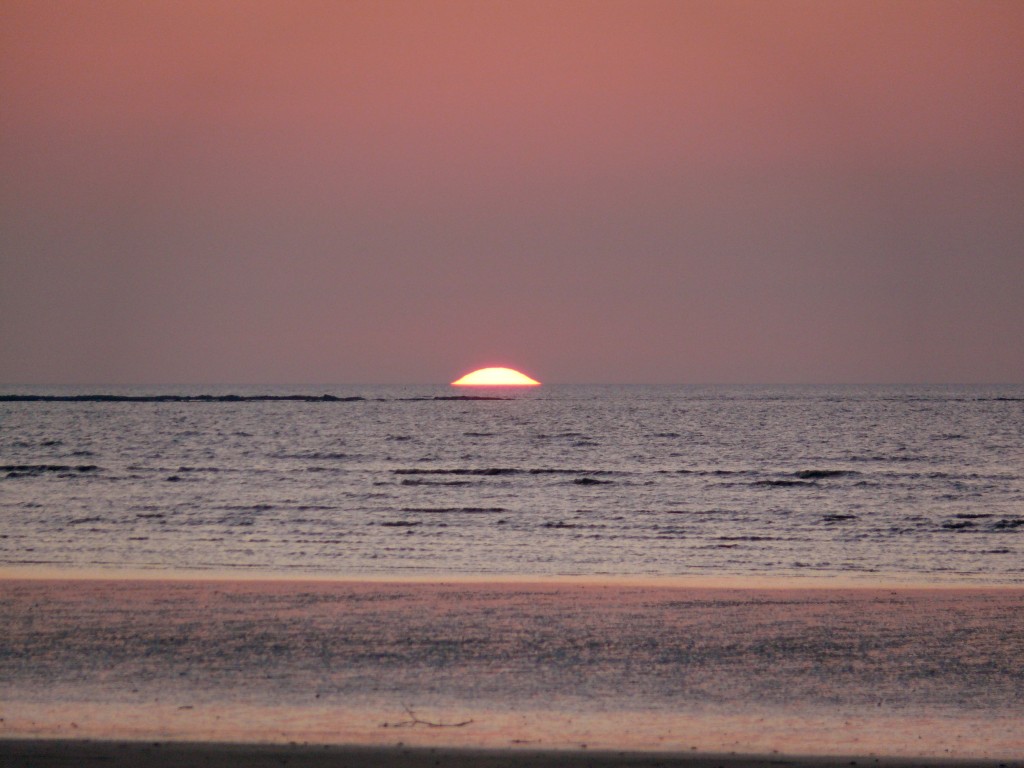 Late evening is the time when the sea is the farthest out, and you can easily walk up to the mangroves on the left tip of the beach’s crescent. That’s also the time when Bordi’s adolescents convert the beach into a dozen cricket pitches and fill the air with their shouts. Unless you are visiting on the weekend, you will be the only one with eyes for the setting sun.

Though Bordi may only be rising on the tourism circuit now, it has already made a name for itself as a center of learning. Its many Jain and Parsi-run schools and polytechnics house thousands of students from neighbouring areas of Gujarat and of Maharashtra.

You can do a lot in Bordi without moving a limb — soak in the sun, take in the sea breeze and give your ear drums a break from the cacophony of the big city. All this is no doubt what makes Bordi such a fine weekend escape for Mumbaikars.

Remains of the day

Further out from Bordi are the famous Bharda Hills and their holy caves. Guidebooks refer to these by their real name, Bahrot Caves, but the villagers seem quite puzzled when you ask for these.

Bahrot Caves hold immense religious significance for the Parsi community, for it was in these very caves that their holy fire was first placed when this small community fled from what was then Persia (now Iran). At the top, they carved out caves from the rock face and for eight years this was the holy place for Parsis around the world. Under the patronage of Shivaji they lived in peace; after his death, the Mughals began harassing them. The fire was then moved to Udvada in Gujarat where it remains to this day.

Versions differ on the number of mountains you have to climb to reach Bahrot Caves. First of all, hire yourself a guide in Bordi for about Rs 100, which is a must because every branch and tree looks the same and apart from the one poor excuse of a path to the top, there is really no other way up. Vehicles can go only as far as Asavli Dam, after which it is a hard climb of almost 3 hours via the regular route. On the way are a couple of benches built by some kind Parsi soul. Carry plenty of bottled water and sandwiches, as it will be a good 4 to 5 hours before you get back to base. Also wear good hiking shoes and don’t forget your can of tiger repellent for, according to the guide, there are wild animals around.

Once you reach the top, you can see the landscape for miles away. The caves, about four in all, are in a state of neglect and disuse, except for the main cave where the Parsis still conduct their worship service after washing in the water in a nearby cave. The amazing thing is that the water is available 12 months of the year, come rain or shine. However, November-March is a good time of year to go. Summers are hot and it’s too slippery during monsoons. A guide is a must.

Location: On the shores of the Arabian Sea, in Thane District, Bordi is practically Maharashtra’s northernmost outpost and lies just 3 km away from the state’s border with Gujarat at Zai

Route: From Mumbai NH8 to Kasa Khurd via Manor; SH to Dahanu via Ashagarh; beach road to Bordi via Gholvad

When to go: Between June and September. November to end-February are also pleasant. Avoid October and the summer months — Bordi bakes

Most of the people who know him believe that Abhilash Gaur travels too much. Be that as it may, the truth is that all he has managed to see in the past few years are 10 districts of Himachal, less of Punjab and a bit of Maharashtra coastline.