One bright Sunday morning, we headed out to the Himalaya from Delhi, a drive as romantic as it can get, with the road snaking past green mountains and valleys, venerable deodar trees and snow-covered slopes. As we’d imagined, there was plenty of romance in this drive, and all those wonderful things that advertisements tell us are priceless yet come for free: fresh air, beautiful views of jagged mountains, forests to be lost in, snowflakes on the car’s windshield, and heart-stopping glimpses of the mystical Nanda Devi Peak. 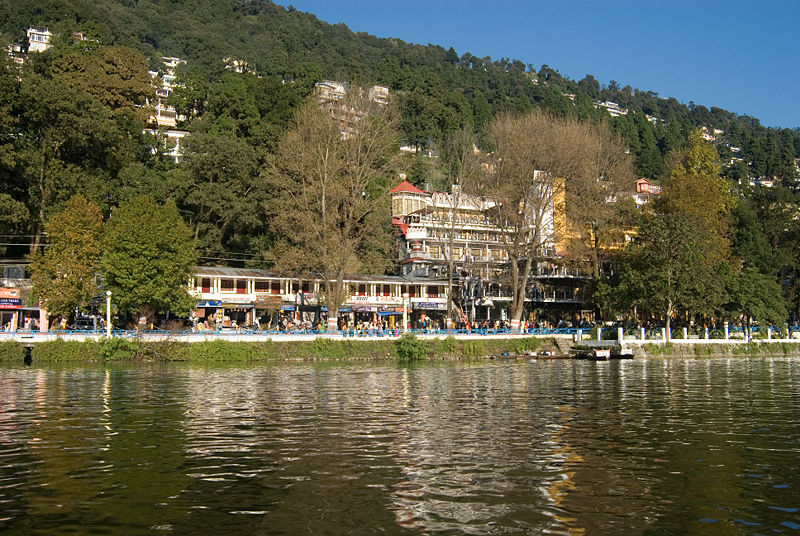 But in this dream-like holiday sequence, there were a few jarring notes as well: a traffic jam created by protesting political workers, bad roads, and stretches where even water was hard to come by. What’s more, hill driving is something that’s bound to test even the most skilled driver.

We had a driver for most of the journey, who turned over the wheel of the Qualis to me most reluctantly only at the fag end of the drive.

Nainital was the first stop of our drive, where we spent two days in bliss, wondering what it would be like to live there. This could possibly have been because I was far away from the chaos of The Mall, staying high up at Ayarpatta, where I went for endless walks in the forests, slowly getting used to the mountains. From there, we drove on to Almora, and the views were stunning. Every spot we crossed was like a picture perfect postcard, every sight a photo opportunity: brooks, valleys and deodars giving way to oaks and pines, and somewhere, even a forest fire. Almora itself, however, turned out to be a pretty uninspiring stop.

The next day, we reached Binsar, where everything was pretty, and though the accommodation itself wasn’t very nice – the loo was terrible – the forests were so enchanting that you didn’t want to leave it behind. I walked around in the hilly jungle terrain and returned to visit the forest post-dinner, in absolute darkness. Our next destination was Kausani, or so we thought. Driving past Bageshwar and Baijnath, with lush green hills and rivulets alongside, we reached Khandar, where we encountered a roadblock that was unlikely to be cleared for a long time. 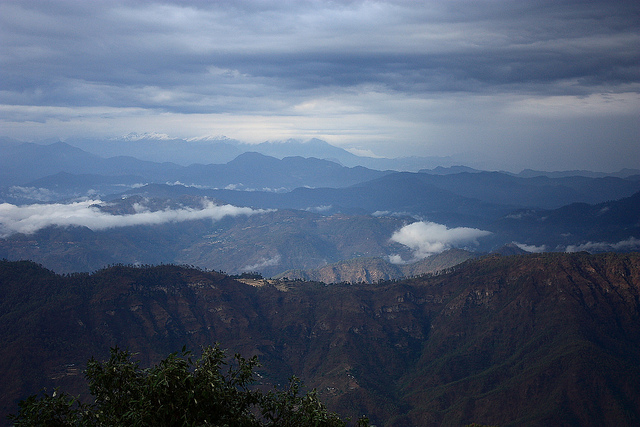 Foregoing Kausani, we headed instead to Gwaldam. The roads were bad and we were terribly hungry and tired by the time we reached there. We went straight to the GMVN Guest House, which was just about good enough for omelette and pakoras. Distressed, we considered turning back. We ploughed on, however, and it was a good thing we did, though the next leg of the journey went by in a blur. Karnaprayag and Joshimath beyond seemed like mirages, places we felt we could never reach, driving on the crummy road from Gwaldam. Wherever we stopped, the locals reassured us that the road would improve just a furlong ahead. More than their assurances, it was our search for good food and water, and to a lesser extent, our fascination with the Pindar River that was travelling with us to Karnaprayag, that kept us going.

We crossed Karnaprayag in the dark and Joshimath was still about 2 hrs away. Finally the road improved, and at Chamoli, we feasted on omelettes, paranthas and tea. Thus fortified, we pushed on, clutching bags of chips as insurance against emergencies. We reached Joshimath past 10 in the night and checked into a hotel. It was only the next morning, on our way back, that we saw what we had driven through: it was dangerous mountain terrain, with hills on one side, and a sheer drop on the other, with the Alaknanda River flowing past. One wrong turn and we would have plunged into her depths. We wouldn’t recommend night driving here to anyone. 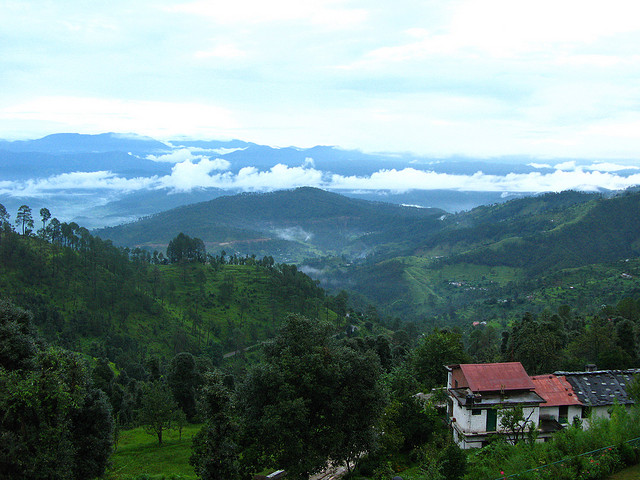 There were other reasons to celebrate life that day: Joshimath was simply fabulous, and offered us stunning views of the Nanda Devi Peak and the Great Himalayan Range. We drove on to Auli, realising at some point that it was better to walk the last stretch to the Cliff Top Club instead of driving. The next segment of our drive was from Joshimath to Ranikhet, a long drive made frustrating by a protest march at Chamoli that had us stuck for hours yet again. Once through, we reached Karnaprayag comfortably enough in time for lunch. The road ahead was a barren stretch, and we were short of fuel, and no matter where we stopped and asked, we were told that Ranikhet was another 50 km away. We finally reached the place past 9 pm, where we tucked into a sumptuous dinner and slept in cosy log huts at the Holm Farm. The last leg of our journey was from Ranikhet to Corbett, a sunny drive through the hills, with sheer drops on both sides at certain places. We didn’t get a chance to stop at Corbett, as we were woefully short of time, and as we reached the heat and dust of Delhi, we realised the mountains were beckoning again.

I learnt some invaluable lessons during this drive. These include: avoid driving at night on any stretch – hill driving and night driving are two different kinds of adventure, meant to be enjoyed independent of each other; carry plenty of food and water with you – on certain stretches, you’ll be lucky to get even a packet of chips; tank up wherever you can – you may not come across another fuel station for miles on end; and do remember that cellphone connectivity is usually down after Nainital. An Idea connection was the only one that worked during our drive.

When starting from Delhi, set off as early as you can. Head towards Ghaziabad via the Nizamuddin Bridge and Akshardham Temple. At Ghazipur, turn off NH24 Bypass towards NH24 via Kaushambi and Sahibabad to reach Mohan Nagar crossing; once there, keep going straight till the turnoff towards Meerut (this is marked by a huge green board). Thereafter, take the first right. You are now on NH24; take it all the way to Rudrapur. While most of it is a double carriageway, construction for flyovers is on in many parts and you may find yourself on a single carriage. The roads are by and large smooth. There is a toll barrier at Babugarh and two at Moradabad. This stretch is a comfortable drive – you have petrol pumps, dhabas, restaurants, loos and auto repair shops at regular intervals.

At Rudrapur, turn onto NH87 and the hill drive starts as you exit Pantnagar. Night driving is not advisable hereon as the roads are not well lit and it’s not safe. From Nainital to Almora, you are on NH87E. The road is extremely bad in patches. Stalls offering a few refreshments are found often enough in the hills but proper dhabas are hard to come by. Petrol pumps and repair shops are mostly to be found in the comparatively bigger towns. Almora to Binsar is a dusty drive through forested areas. If you plan to stay in Dhaulachinna, you’ll have to endure 13 km of dusty jungle track. Otherwise, the road is in good condition.

After Binsar, you leave the national highway and take state highways till Karnaprayag. While the road is bad only in small patches till Kandhar, thereon it’s all bumpy driving. The road between Kandhar and Karnaprayag is miserable to say the least. At Karnaprayag, you get onto NH58, which is by and large a good road. Thereafter, you’re on NH58 till Joshimath. The drive to Auli is not an enticing one and may be hazardous for your car. You’ll come across not just stones, pebbles and rocks, but even boulders. It’s advisable to take the GMVN cable car from Joshimath to Auli and back, rather than undertake the tedious car drive. On the return journey, from Karnaprayag to Ranikhet, take NH87, which is a bit troublesome for the first few kilometres only. After Gairsain, it’s a smooth drive. The good roads continue past Ranikhet too, nearly all the way to Corbett National Park. However, this stretch is strictly to be avoided at night, since there’s no lighting and no road guards in places to protect you from the deep valley to the side. Even during daytime, it’s best to go slow. From Kumeria to Ramnagar, it’s a jungle road, which somewhere along the way (near Mohan) turns into NH121. The road broadens after Ramnagar, though it’s a single carriageway all the way to the bypass at Moradabad, where you get back on NH24.