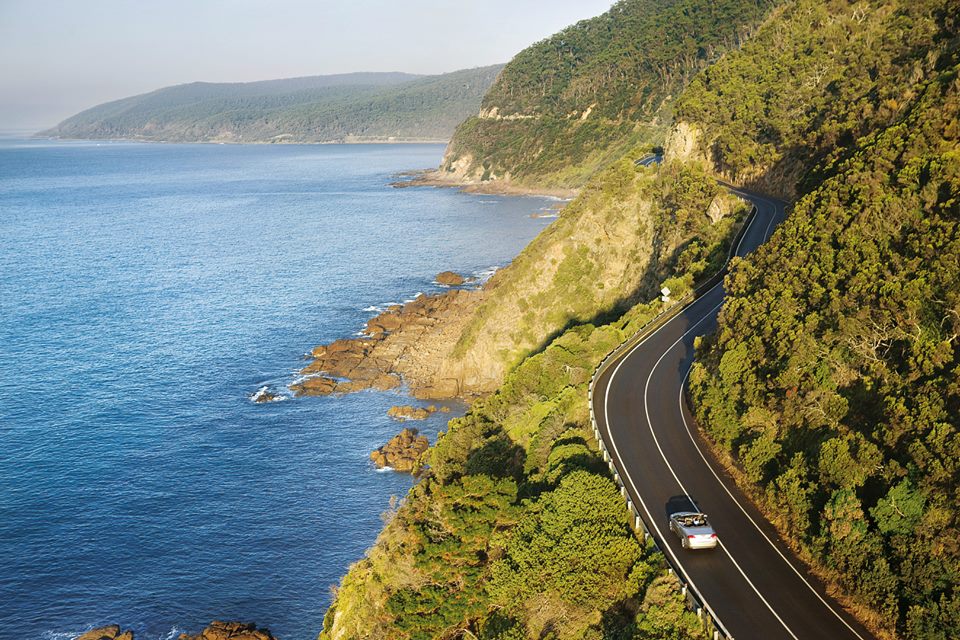 We walk on the boardwalk, whipped by the sharp, icy gusts of screaming wind and admire nature’s artistry. Waves crash into the jagged edges of the stacks, as lovers stand romantically in the sea-spray. Later, we get a bird’s eye view from a helicopter, hovering over bizarre rock formations, whittled pieces of rock art, even a formation called salt and pepper, the gorse-and-wildflower-covered cliffs, fierce blowholes and hidden coves. The Twelve Apostles look like small textured bits of clay, topped by windswept heath, in an abstract painting, from this angle. 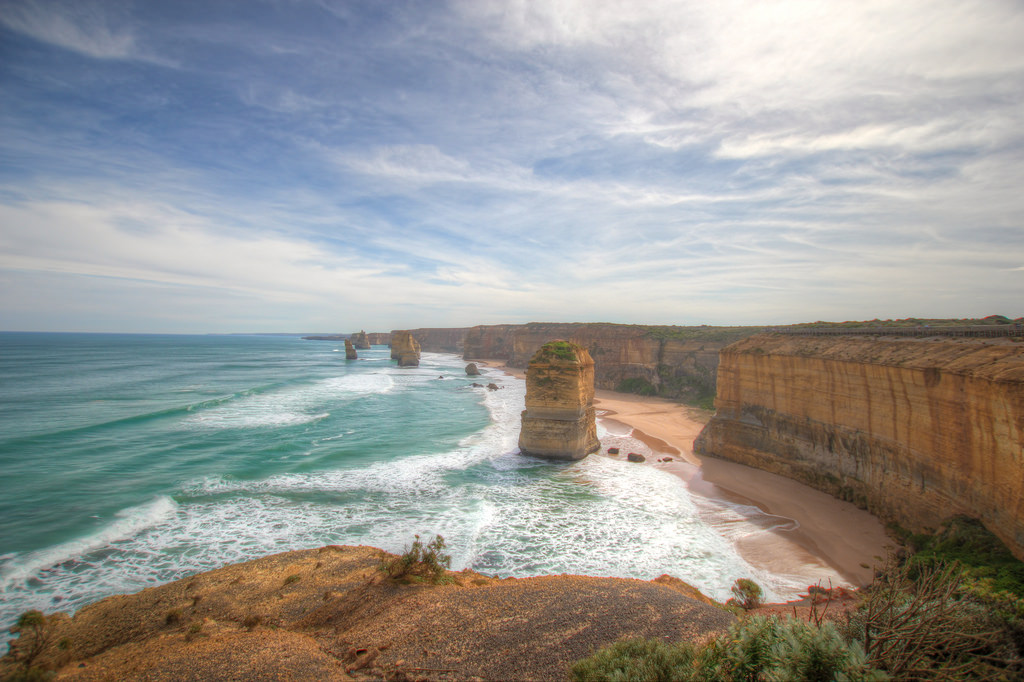 Sea, wind and time have carved this coastline: the cliff-hugging road and the dreamlike vistas are framed masterpieces. The Great Ocean Road in Victoria, Australia is extraordinary in its diversity of landscapes: pristine beaches lashed by brutal waves, bush land, cathedral-like arches, pretty-as-a-postcard seascapes, a smorgasbord of ocean views, and even emerald canopies of rainforests.

Our odyssey on this road started at Warnambool, one of the most active ports of Victoria in the 1800s, and today the site of Flagstaff Hill Maritime Park — a marvellous re-creation of life in a nineteenth century port, with a million-dollar laser show. The Great Ocean Road was built by soldiers returning from the First World War, as a memorial to their fallen comrades, over a period of 14 years with simple picks and shovels. It not only connected isolated fishing villages and logging camps but also put it firmly on the tourist map. The road has reminders at every turn with names like Artillery Rocks, Shrapnel Gully and an impregnable buttress called Mount Defiance. 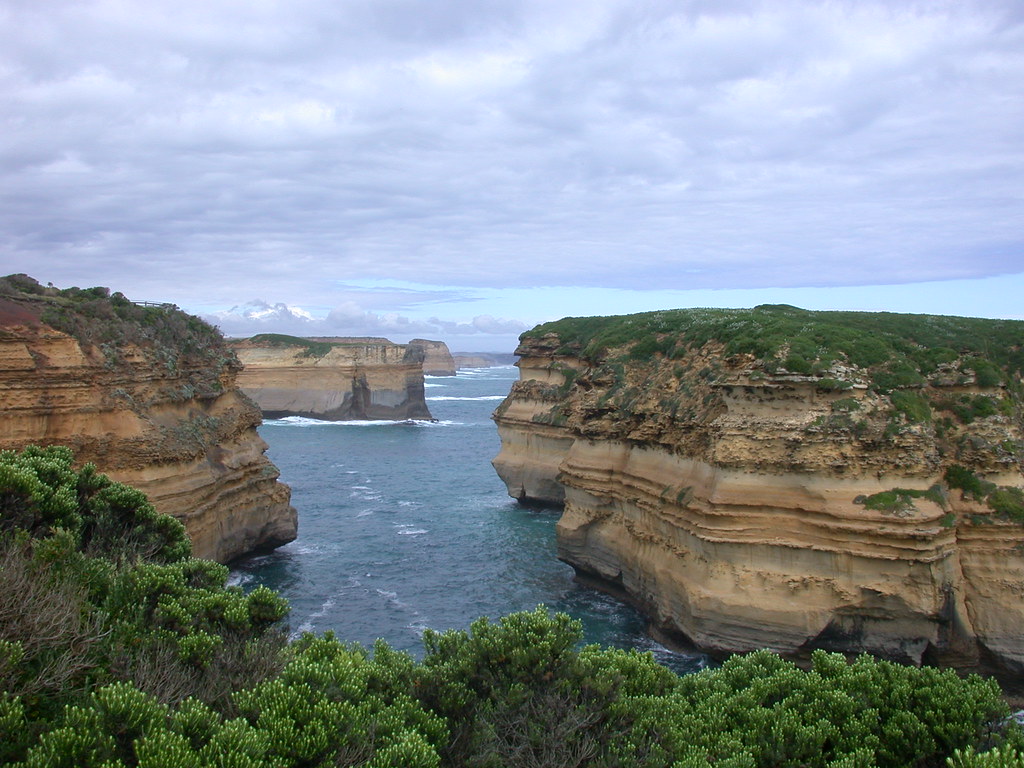 The stretch from Warnambool winds through green pastures, with obese Jersey cows and wool-clad sheep grazing on the sweet grass. Our first viewpoint is the Bay of Islands, a 33 km-long strip of national park, with a warren of rugged upright rock stacks, against the backdrop of the turquoise sea. Cormorants and seagulls nest in the craggy outcrops safe from predators like foxes, as the turquoise waters shimmer like molten glass. The chilly blasts of wind, blown directly from the Antarctic have shaped this coast over millennia. The remarkable short tailed shearwaters fly 30,000 km and return here every year to burrows to breed in late September.

We continue to the Bay of Martyrs, with its long, sandy beaches and rock stacks. There are spiky comic book-like ‘grass trees’ that grow under the taller gum trees. With the brutal surf and the salty spray hitting us like a lethal arrow, we stand on a boardwalk and see the famous ‘London Bridge’ formation. Though now it looks more like an arch. Yes, London Bridge fell down! Margaret Ryding, my guide, tells me the story of how a man and a woman were on a romantic weekend and walked on to the sandstone towers. While they were on the crest, the bridge fell away, and they were stranded. Rescue helicopters and the media reached there. Twist in the tale: the man was not married to her and his wife saw the whole coverage on television… oops! 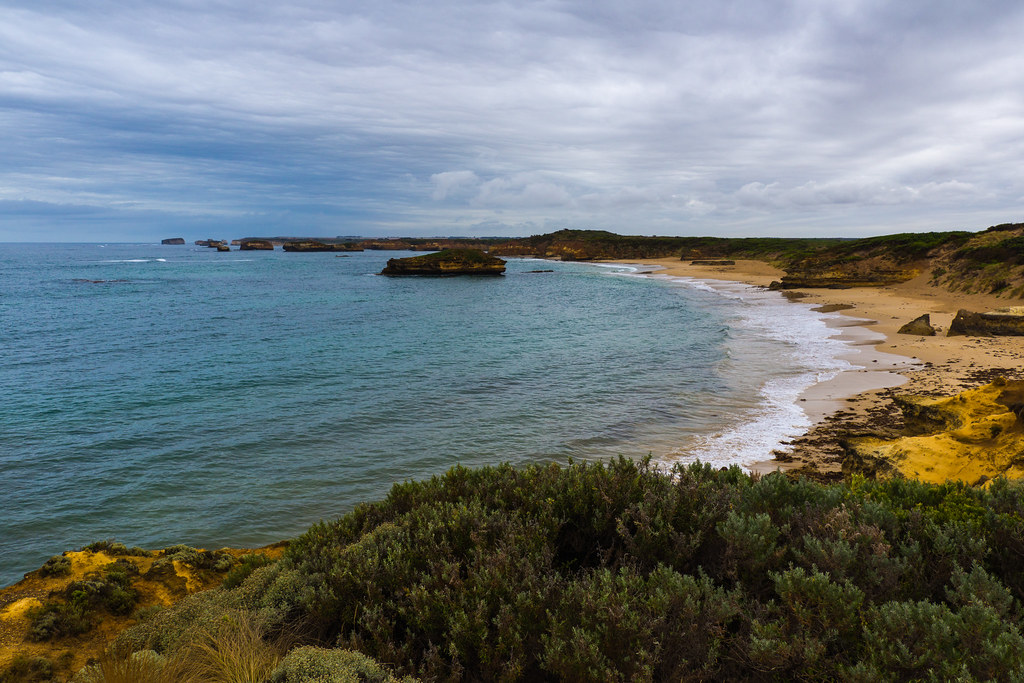 Bay of Martyrs (by bryce.muchow)

The Great Ocean Road continues to wind and loop with views of the sometimes placid, sometimes thundering ocean at every turn. There’s a constant there’sno- end-to-this-beauty feeling that overwhelms me. This is the kind of cinematic freeze-frame road that you must do in a blazing red convertible! The coast from here is called the pretty ‘Lace curtain’ — sheer cliffs with white, foamy surf, making for great photo-ops. We drive in to Port Campbell with its Norfolk pines and sheltered cliffs, a seaside town with a vibrant vibe. There are bakeries selling homemade goodies, small cafes and restaurants offering crayfish, the local delicacy. This is the town to stay and relax and indulge in bushwalking, bird watching or surfing, though we are on a no-time-to-dither itinerary.

It has all the makings of a romantic blockbuster. It was a wild and stormy night. The rough seas, the dense fog and the notorious rock outcrops in this treacherous coast, were the death knell for the clipper ship Loch Ard, with 54 passengers aboard, almost at the end of her three month journey from England. It sank off Mutton Bird Island, at the entrance, to what is now called Loch Ard Gorge. There were only two survivors: a handsome man called Tom Pearce who managed to cling to a lifeboat, and was swept in to a gorge and a young girl called Eva Carmichael who clung on to some wreckage till she was spotted by Tom. They took refuge in a sheltered cave, until Tom scaled a sheer cliff, ran into some farm workers from a nearby sheep station, and got help. We are at the famous Loch Ard Gorge. We look over the sheer cliffs and the blowhole and imagine it when a storm is brewing. This is the place where the mutton birds come to roost at dusk. 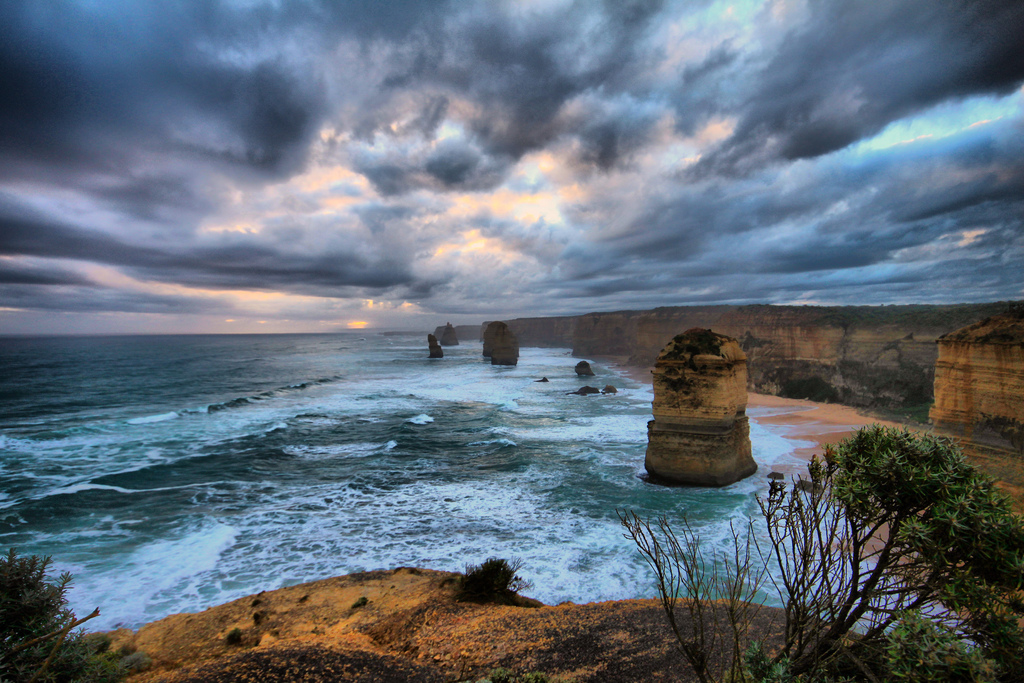 The Twelve Apostles (Photo by shubham)

There is more than just scenery to attract visitors to the Great Ocean Road. This is a great stretch for whale watching as well as spotting Australian animals like koalas, wallabies, kangaroos, fairy penguins, wombats, and, a few kilometres off the beaten path, the incredible star-like glow worms at Melba Gully. The Great Ocean Road is also home to some of the best dairies with delicious cheeses, orchards and berry patches. We wind through the road lined with trees with pom pom-like branches called sheoaks, tea trees and irises. From Loch Ard Gorge it’s a short drive to the crowning glory of the Great Ocean Road — the Twelve Apostles — forbidding monoliths carved over eons, and standing proud like sentinels of the coast. They glow an iridescent purple in the golden rays of the afternoon sun, over the sandy beach and the tall cliffs like bizarre props in a fantasy movie. Now there are only seven stacks left, as they fight a losing battle with the fury of nature, as it batters their roots.

The Great Ocean Road is filled with B&Bs — pastel, cosy cottages with home-cooked organic food and long walks on deserted beaches. If driving is not your thing, you can take the Great Ocean Walk from Apollo Bay to the Twelve Apostles. There are eco-friendly campsites and well marked trails where you can enjoy fine food and wine. The stretch of coast between Port Fairy and Cape Otway is the notorious Shipwreck Coast with more than eighty shipwrecks recorded. The Bass Strait was the route taken by many convicts, colonists and gold hunters in the 1800s and the thick fog, dangerous reefs and the lack of lighthouses made this a killing ground. 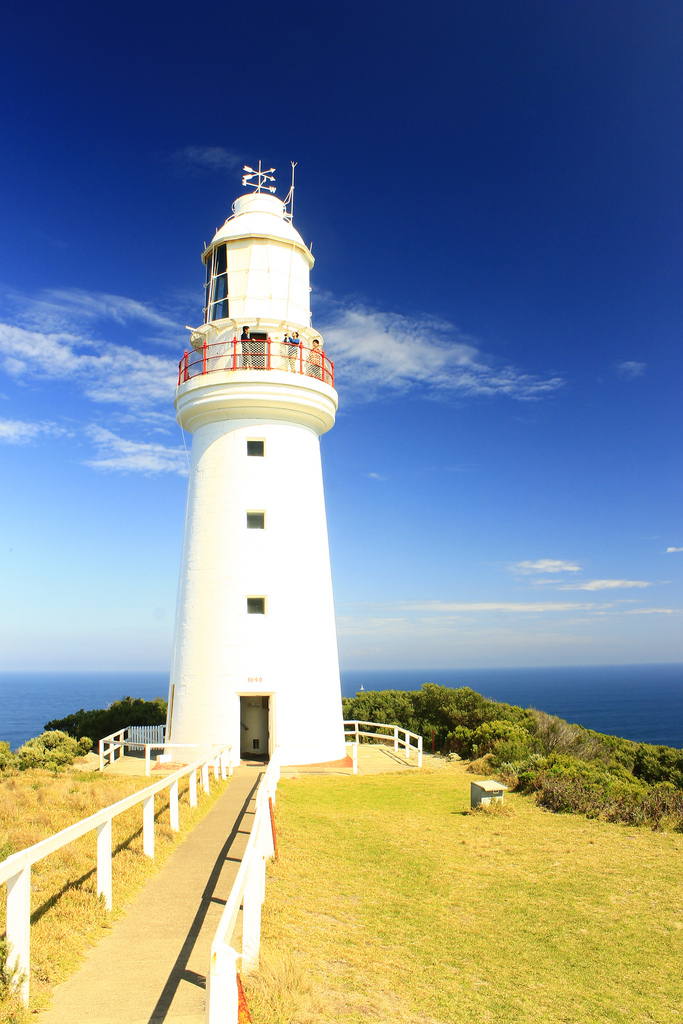 Passing the Aire Valley with its dairy cattle and quaint farms, we drive in to Great Otway National Park with its beautiful hinterlands, ancient Jurassic Park-like rainforests with ferns and myrtles, crimson rosellas and cockatoos. We drive inland from the main road to the most southerly point on the Great Ocean Road, the Cape Otway Lighthouse. Sitting 91 m overlooking the stormy confluence of the Bass Strait and the Southern Ocean, it is one of Australia’s oldest lighthouses, built in 1848. For many immigrants, this lighthouse was the first sight of land after months. Sailors have likened this narrow perilous stretch from Cape Otway to King Island as ‘threading the needle.’ We climb the lighthouse to meet Peter, the light keeper, who shows us the old fashioned lights mounted on a base of mercury. I stand on the platform, as the wind slaps my cheeks and watch the perilous rocks that wrecked ships. Our ‘aha moment’ is driving back on the forested roads and finding those adorable Aussie icons — two koalas on a gum tree, cuddling their young and posing for us.

Apollo Bay, called Paradise by early European settlers, with its wooden sculptures on the marina, is at the foothills of the Otways. We spend some time in a café here, watching the breakwater and the pier filled with bright-coloured boats. Between Apollo Bay and Lorne, the road becomes wilder and more winding with the gleaming sea as a constant backdrop. Signposts warn drivers with boards like ‘A micro-sleep can kill in seconds.’ Margaret tells me about the Great Ocean Road Marathon which is run every year between Apollo Bay and Lorne and ranked in one of the Top 100 races in the world. 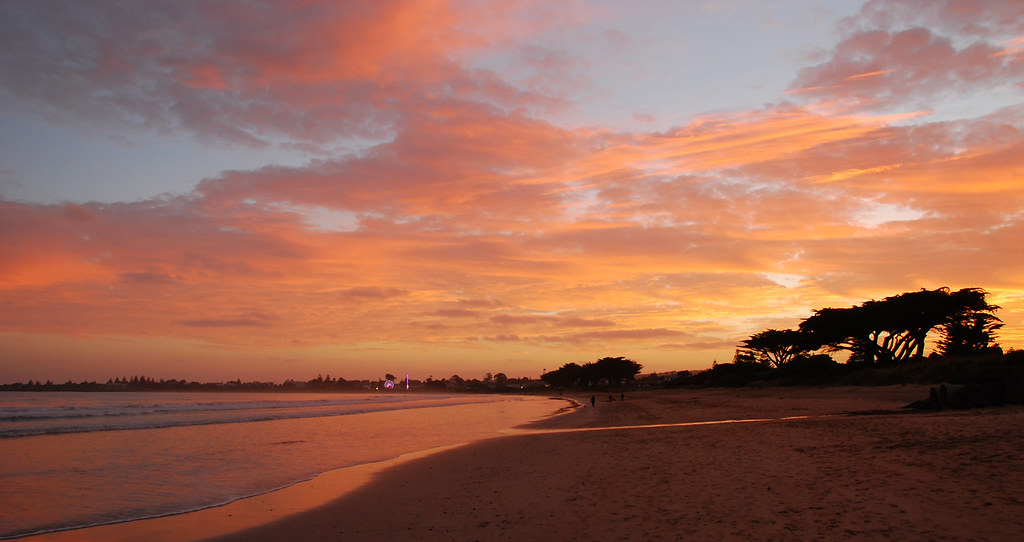 Lorne is the typical Victorian resort town, situated between sparkling waters and the misty rainforests, with opulent holiday homes and cool urbane restaurants. The famous local race is the Pier to Pub — where the winner is the first one to jump off the pier, swim 1.2 km in the bay and then order a pint of beer at the local bar. Quintessentially Aussie! Our last stop is Torquay — a happy-go-lucky beach town — Oz’s surfing capital celebrating beach culture — we see lines of shops selling surfing equipment, baggy clothing, and healthy food, open air restaurants and bronzed bodies of men and women holding surfboards heading for the beach. A scene straight out of ‘Baywatch’! This town is the home of the giants of surf wear- Quicksilver and Rip Curl. As we approach Geelong and the final highway to Melbourne with glimpses of the urban skyline, I still dream of the swoops and loops of the winding road, the azure waters, the marsupial-filled wilderness, the sweeping skies, and the crumbling cliffs. Sheer poetry, that’s the Great Ocean Road.

By air/rail: Fly to Melbourne via Singapore. The Great Ocean Road begins approximately an hour’s drive (100 km) at Torquay from the eastern from Melbourne or 700 km at Warnambool at the western end. You could take a bus tour and return to Melbourne in a day (covering around 650 kms over seven hours) but this will not give you time to see attractions off the road. The Road is a romantic destination best shared and absorbed over a few days.

By Car: If you are travelling by car, you have the advantage to turn off the road and visit off-beat places.