Ladakh is a place that transforms geography from a boring school subject into a superb drama of altitude and terrain. A drama in which you can thrill to any random reference point: The Great Himalaya, the Indus River, the Zanskar Range, Siachen Glacier…. Here, we try to broadly explain the landscape of Ladakh, how you can explore it through some great road journeys, and how this terrain and climate shapes the local culture and life.

Road from Manali to Leh (Photo by Himalayan Trails)

The Great Himalaya, the barrier that separates Ladakh from the rest of the country, runs in a roughly south-east to north-west direction, and nearly all the other primary features of Ladakh’s geography follow the same direction, in repetitive, parallel lines. The Great Himalaya makes Ladakh what it is, inasmuch as its glorious heights prevent monsoon clouds from crossing over to this area, putting it in the ‘rain shadow’, making the terrain a ‘mountain desert’.

The next range is the Zanskar Range, parts of which you also cross while travelling in by road. Between the Great Himalaya and the Zanskar fall the Suru and Zanskar rivers, and their valleys. The Zanskar is still a lesser-known part of Ladakh; it’s most familiar to trekkers. Padum is the base for treks and visiting monasteries such as Karsha or Phugtal. The Stok Kangri, a part of the Zanskar Range, is visible from Leh, lending it a background of grandeur and snow.

Roughly parallel to the Zanskar Range, again on a southeast-northwest axis, lies the area most familiar to non- Ladakhis: the Indus River and its valley, with gompas dotting its banks, an area we can call Central Ladakh.

The Indus emerges in western Tibet, from the northern face of Mount Kailash, enters Ladakh at its southeastern border at Demchok, and flows north through the middle of Central Ladakh. The river also accepts the tribute of practically all rivers you’ll hear of in Ladakh: Suru, Zanskar, Shyok, Nubra. From here it flows onto Baltistan, Gilgit and Pakistan — it is the backbone of Pakistan’s Punjab and Sindh areas. India gets its name from the Indus through a fascinating culturallinguistic progression. The river’s Sanskrit name ‘Sindhu’ became ‘Hindu’ in Persian and ‘Indus’ in Greek. Thus, ‘Hindustan’ was the name given in Central Asia to this land across the Indus, which conquerors from the west, from Alexander to Ghazni to Babur, aspired to. And ‘India’ became the European term. The river also gave its name post facto to the Indus Valley Civilisation (3500-1500 BCE), spread across sites in Pakistan and India, many of which flourished along this river.

The Indus, and the local meltwater streams that flow into it, were the only means of irrigation for people who settled in Central Ladakh. Beside these water channels they created these jewels of green fields, poplars and willows, the gold-and-orange palettes of autumn, white-washed houses, Buddhist traditions and monastery treasures… all bursting out of a brown canvas. 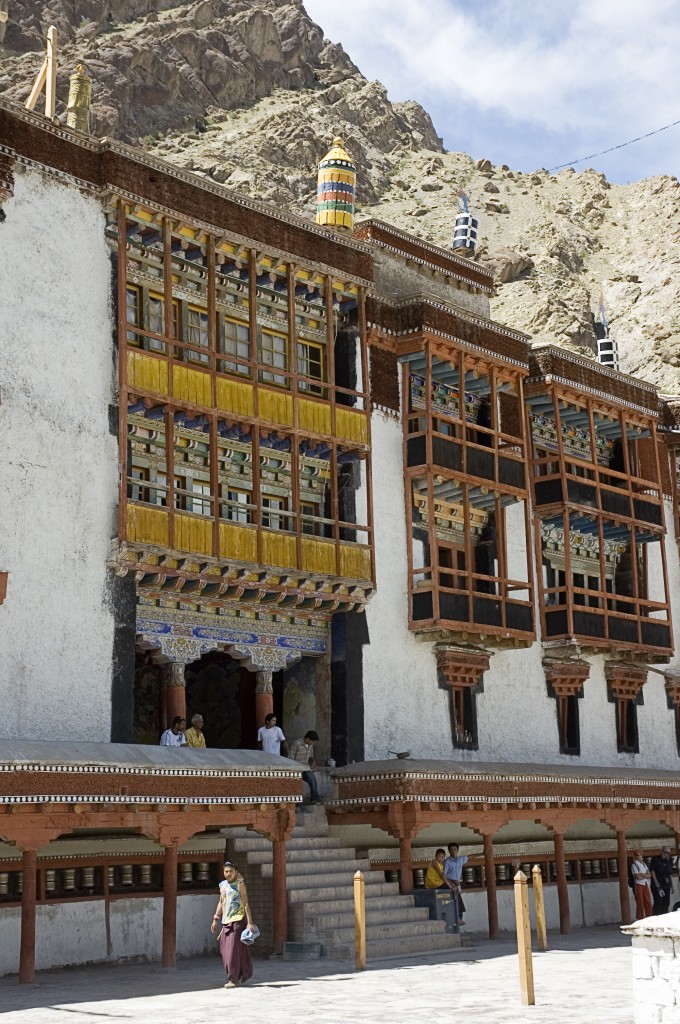 On the other side of the Indus Valley lies the Ladakh Range. If you want to go to the Nubra region you have to cross Khardung La in this range. In the north-east of Ladakh lies Nubra, consisting of the valleys of the Nubra and Shyok rivers, which meet here to finally flow into the Indus. Nubra is known for its postcard prettiness… for its abundance of seabuckthorn; for the double-humped Bactrian camels; for sand dunes along the Shyok River; and Diskit, Hundar and Panamik villages here are known tourist spots. The Great Lakes In the south-east of Ladakh lies the crisscross system of mountains with Ladakh’s three great lakes. This is a continuation of Tibet’s Changthang Plateau. This area is such a collection of peaks and ridges that meltwater here finds no proper slope to flow away, forming the beautiful saltwater lakes of Pangong Tso, Tso Moriri and Tso Kar. Of these Pangong falls mostly into Tibet.

The traveller who goes to Ladakh by road, whether from Srinagar (431 km) or from Manali (474 km), makes one of the great road journeys of the world. The Manali route is longer and is ideally done over two days (as buses do), while tour operators cover it in an uncomfortable day trip of about 16 hrs. The Srinagar route also takes 2 days by bus, but a long one-day trip with tour operators.

Early in the trip, one crosses the Rohtang Pass, a big attraction for Manali tourists but a relatively small marker on this particular trip. The Lahaul area of Himachal — where you may stay in Keylong — is a harbinger of the unsettling treeless beauty to come. Later in the journey, the stark mountains become as if delicate watercolours of ochre, rust, pink, red, blue… shading off into each other. See the gorgeous Suraj Tal, source of the Bhaga River, and cross the windy Baralacha La, which is a threeway junction — your road from Manali meets a road to Spiti and one to Leh.

The campsite of Sarchu, where many buses halt for the night, brings you to Ladakh. This dry windy moonscape is a grazing area for the Changpa nomads and their herds of sheep, goat and yak.

Another striking feature of this journey are the Morey Plains, a 40-kmlong stretch of flatness; even here the Changpa set up base camps. Near Lunglacha La, which falls in the Zanskar Range, the twisted, tortured shapes of wind-eroded rocks (you see these on both routes) are particularly dramatic.

Coming from Srinagar, it is the Zoji La (11,318 ft) that is the marker of a dramatically changing landscape — on the Kashmiri side, alpine beauty, and on the other side there is not a tree to be seen. It’s just the Drass area of western Ladakh that gets some moisture through Zoji La and is snow-covered for months. It is said by some to be the coldest inhabited place after Siberia!

Next comes the town of Kargil, hard to think of as the well-irrigated lush oasis it was now that cross-border hostilities have taken over. The Buddhist village of Mulbekh follows. The road goes through the Namik La and Fatu La, and then again to the settlement of Lamayuru. Lamayuru is the best example of the Ladakhi phenomenon of village houses clinging to steep hillsides (agricultural land is at a premium and must not be wasted on building houses). The descent from here gives spectacular views of the road and its loops for a great distance below.

Both journeys end in central Ladakh’s Indus Valley where, if you reach in daylight hours, the green oasisvillages finally bring relief from the epic starkness. You are now in capital Leh.

As in so many places, geography defines history and lifestyle in Ladakh. Scratch the snowy surface and it is in winter that Ladakhi society comes into its own. With no tourism and no farming, after stocks of salt, sugar, rice, flour, gas, kerosene, potatoes and more have been gathered, it’s time for celebrations. Friends, neighbours and families get together and feast on rice beer, twoweek- long weddings are held, and music-making and story-telling takes centrestage. Around Leh, the monasteries of Spituk, Stok, Thiksey, Chemrey and Matho hold their festivals between November and March. The young play lots of ice-hockey. Life can be hard, though. Water needs to be collected from supply tanks, or derived from melted ice. And yet all the snow is so important for survival in Ladakh. It is frozen life, which will irrigate the wheat and barley fields in the form of meltwater streams and be the main source of water in the summer.

Scarcity of resources like water means that people cooperate. You can see how the irrigation channels of meltwater are used. Each farmer blocks the channel with stones, waters her fields till sufficient, and then removes the stones so the water moves on to other fields. Scarcity of agricultural land (since, in the absence of rain, only glacial streams or the Indus waters can irrigate this land) means that houses are built clinging dramatically to hillsides, so as to not waste productive land.

Historically, as a way of life, scarcity of resources meant that nothing was thrown away. As scholar Helena Norberg-Hodge wrote, “What cannot be eaten can be fed to animals, what cannot be used as fuel can fertilise the land…. Ladakhis patch their homespun robes until they can be patched no more. Finally, a worn-out robe is packed with mud into a weak part of an irrigation channel….” In Ladakh, even human faeces was not wasted. Each house had, and still has, a dry compost latrine with a hole far below. Earth and kitchen-ash was added to the waste “to help decomposition, produce better fertiliser and eliminate smells”. This compost was later used in the fields.

There is literally no waste, wrote the scholar, and today, as we sit amid our polluted rivers, unmanageable urban garbage, depleting resources, increasing fuel consumption and global warming, Ladakh is an excellent place to wonder what we’ve lost. Visit the Women’s Alliance Community Centre in Leh to enter the world of Ladakh’s ecological traditions and world views; there are daily shows (3 pm) of the hour-long documentary Ancient Futures: Learning from Ladakh