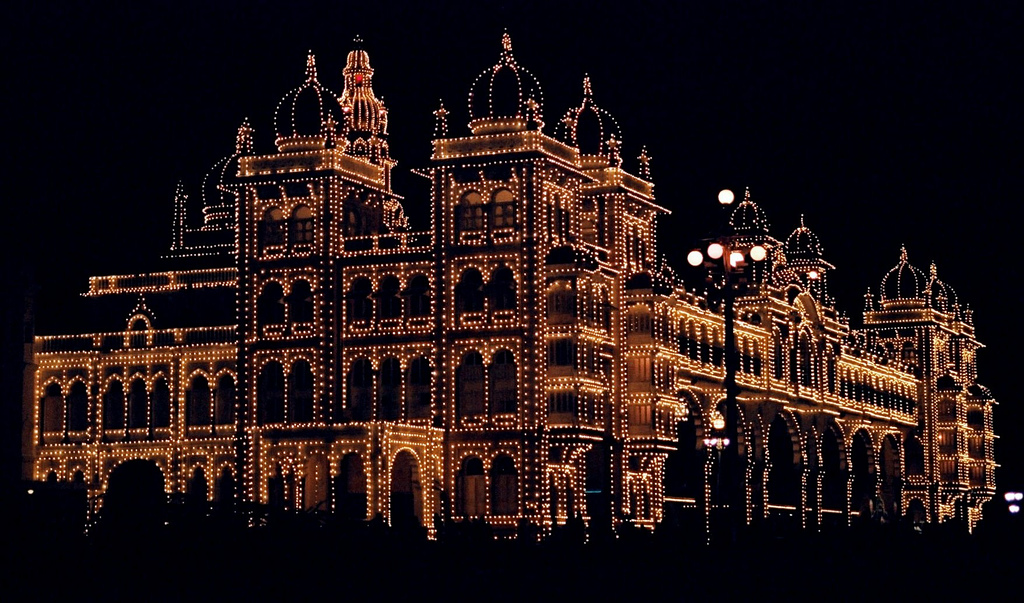 Festivities are infectious events. I am up and about early in the morning, D-day is upon us, from my hotel balcony a view of the palace is in place, and an insistent stream of people is making its way towards the palace gate. The air carries effortless cheerfulness and the sea of humanity a delight in its step. A few autorickshaws have found space on the edge of the throng, and are celebrating by looking utterly wacky and cute with their banana-leaves decorations, thereby lending meaning to the oxymoron ‘green autos’. Not a long time ago, the world believed that everything existed in the allpervasive ether; the festivity here is something akin to that ether.

It drapes everything in view, connects all of it together — palace, roads, trees, shops, police, their mounts and people — infects every heart and produces a mega celebration, the gala festival, the Mysore Dasara. Being part of this crowd is also an experience in faith. The crowd outside the palace and along the procession route is unbelievably thick. There are cordons, demarcating the boundaries, trying to contain the bodies and their fervour, but they spill over, on to the road, trees, rooftops and just about every perch in sight. The overwhelming faith of this overwhelming population gives the Dasara its sustenance. This faith has traversed many miles, has come in from the surrounding villages and towns, will wait hours, come rain or sun, to get the fleeting opportunity to pray to the deity who is royally touring the city in a procession. This procession, called the Jambu Savari, is the culmination of the 10- day long Dasara festival. Dasara here is different from the northern Dussehra; it has nothing at all to do with Ram, his story or his triumph over Ravana. 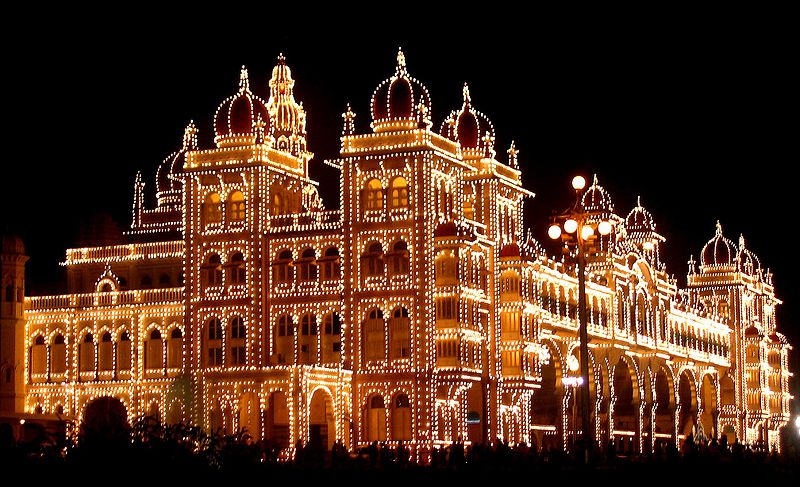 The major religions are highly accommodating organisms; as they spread, they absorb the religious practices of their new followers. Festivals thereby come to contain within them multiple celebrations, joys and memories of various communities, ritualised, evolved and then assimilated over long periods; gods and goddesses get multiple names and stories. In Mysore, Dasara is a festival devoted to the goddess Chamundeshwari, who killed the demon Mahishasura and who literally lords over the city from her hilltop abode. The demon is said to have lived in these hills and gave Mysore its name. The Mysore Dasara festivities are spread out across several locations in the city. The most important venue is in the grounds of the 20th century Mysore Palace. This becomes an open-air setting with the majestically lit palace providing a stunning backdrop to classical Indian performances.

Every evening, as the sun sets and spreads its reddish glow in the western skies, nearly 97,000 palace lights come on, all at once, converting the gigantic structure into a dazzling silhouette and leaving the assembled crowd agape. The palace is also where the Jambu Savari begins. From 10 in the morning, people have been trooping in; a few thousand get invitations and tickets for entry. Palace guards are colourfully liveried, looking not unlike Himalayan pheasants: one group is in red coats, black trousers and multi-coloured turbans while another shines in green coats, red trousers and red turbans.

A puja is held in a temple within the palace complex, after which the procession is inaugurated by the governor and the scion of the Wodeyar royals; at 2 o’clock in the afternoon they climb a stage and shower flowers on the idol of Chamundeshwari, sitting in a golden howdah atop Balaram. Balaram is the elephant for the day, clothed in the most brilliant blues, yellows and magentas I have ever seen, and is flanked by Kanthi and Sarala. Amidst sounds of cannon fire, the pachyderms accompany waves of dance groups, music bands, decorated elephants, horses, camels, vintage cars and colourful tableaux out from the palace walls on to Mysore’s streets. A Nandi Dhwaja dancer is moving rhythmically with a 20-foot-long pole balanced in a pouch worn at the waist, followed by Dollu Kunitha dancers in semi circular formation with their drums, cymbals and flutes. Veeragase, a Shaivite ritual, is on full display — men with needle-pierced mouths move to a riveting tempo. Kolata is a stick dance; each dancer has two sticks in hand, and together the group creates various patterns and rhythms by bending, swaying and jumping.

There are also more mundane themes like silk production, yoga, health messages and religious sects on display on moving floats. The grand pageant moves at a snail’s pace and takes about 3 hrs to cover the 41/2 km to the Banni Mantap grounds. The entire route of the pageant, cordoned off with ropes and with people packed on either side of the road, is heavily policed. Moving in the thick crowd (I do not advise this, there is hardly any place to move; I can walk up and down the procession path, thanks to my first-ever press pass), I realise that it is here — on the sidelines, beyond the barriers through which the procession moves — that the real throbbing heart, the spirit of this lively celebration, lies. These devout throngs give life to the exploits of the entertainers and performers; without this adoring audience, the entire show is but an empty routine. The crowds love the entire display, and clap, laugh and scream at every opportunity. But it’s the diminutive idol of the goddess that has the biggest, the most significant presence. The idol of Chamunda is practically invisible, sitting on the tall Balaram, concealed under a mountain of jasmine. That doesn’t matter.

She is the repository of the devotees’ faith and it makes her as tall as Chamundi Hill — her more permanent seat. Chamundeshwari brings up the rear of the parade. Crowds greet her with loud worshipping cries, the young run after her, the elderly plaintively bow to her, most are praying to her. The goddess has come to them, and I feel they are happy that they have done their bit by the goddess. The relief is most evident later when the sun has mellowed and the palace grounds are thrown open to the public. People now have some space for themselves after the massive squeeze of the afternoon. Here they are simply lounging in the grass, resting their tired limbs and aching backs. They are eating their favourite snacks, children are running around blowing whistles, glee writ large on their faces. Here, it seems, people have got back the palace they have otherwise given to the rulers — have reconnected with their joy and zest in life and their faith in themselves that they have otherwise invested in their religion and their goddess Chamundeshwari.

Dasara is celebrated on the first 10 days of the waxing phase of the moon in the Ashwin month of the Hindu calendar; this is some time in September or October and the dates vary every year. The two equinoxes and the two solstices are the usual occasions for many festivals the world over, connected to seasons, agricultural practices, the enjoyment of fertility, celebrating harvests, propitiating rain, and so forth. It is believed that Dasara originally coincided exactly with the autumnal equinox but over centuries (due to shifts in calendars) it now only hovers roughly around the equinox. It was initially a thanksgiving festival for timely rains in the honour of the Vedic god Indra, but later became associated with Chamundeshwari. Dasara became institutionalised and attracted state patronage during the reign of Vijayanagar rulers. An Italian traveller, Nicolo Dei Conti, witnessed the celebrations in 1420 and left a detailed account. The Wodeyar rulers made Chamunda their tutelary deity, and began the tradition of the regal Jambu Savari in 1805 during the reign of Krishnaraja Wodeyar III.

The king conducted a special durbar in the Mysore Palace during Dasara, which was attended by members of the royal family, special invitees, officials and the masses. With the amalgamation of Mysore State into the Indian Union, the pageant is now flagged off by the chief minister or governor of Karnataka, and attended by the scion of the Wodeyar family. The 10-day Dasara sees scores of cultural programmes held at many venues: Mysore Palace, Jaganmohan Palace, Town Hall, Kalamandira, Veena Shesanna Bhavana, Rangayana Bhoomigitha, Rajendra Bhavana, Krishna Gana Sabha and Natana Ranga Mantap. A wrestling competition, pet show and film festival are also organised. On the eve of the Jambu Savari, a torchlight parade is held at the Banni Mantap grounds. In 2007, Gold Cards were sold for INR 6,000 each and tickets for INR 1,000 each for entry into Mysore Palace for the Jambu Savari. 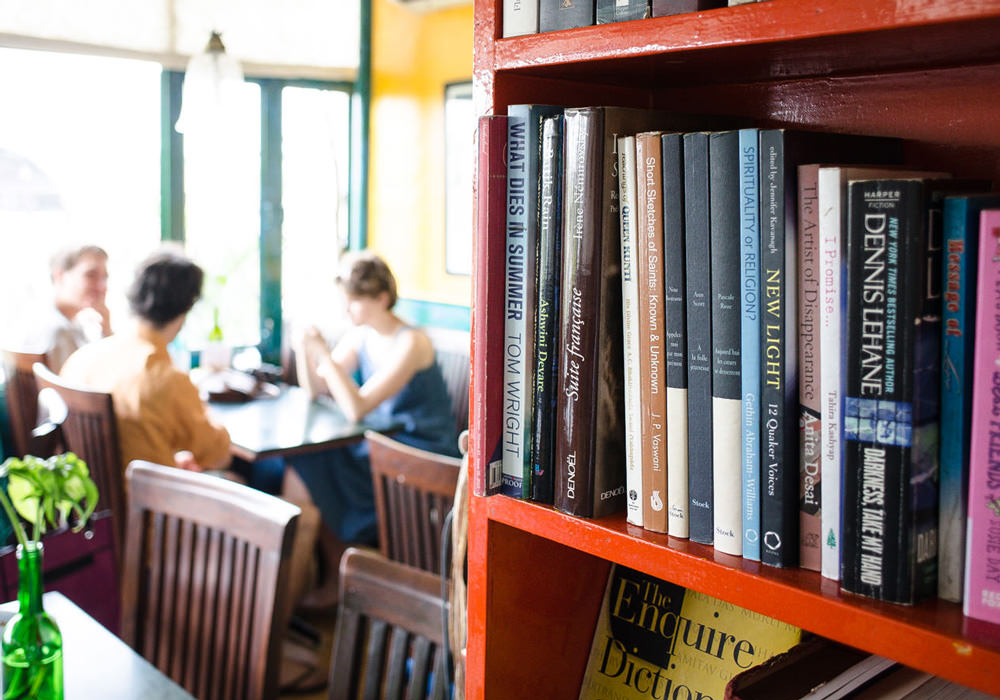