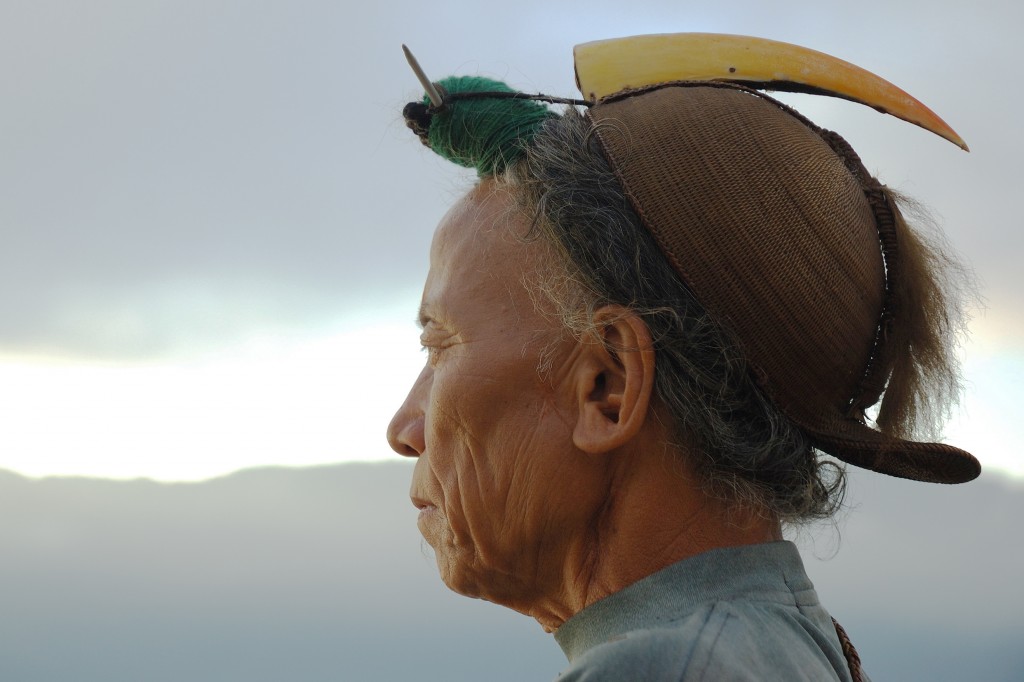 I am probably one of the lucky few to have actually seen a tiger in Namdapha Tiger Reserve but that was probably because I had gone there to search for something else. Namdapha is unpredictable, which is why a visit there is an experience of a lifetime. It is a forest that beckons and stays within, its presence not made up of the individual tigers, flowers, butterflies, trees and people but one large pulsating entity that fascinates and charms.

Miao is the name of the town at the entrance of the Namdapha Tiger Reserve and another 28 km by road takes you to the Forest Department-run tourist complex at Deban. The lodge is set on the banks of the majestic River Noa Dehing, a tributary of the Brahmaputra, and early morning walks along the riverbank are a must. The mists rise slowly from the valleys, goaded by the rays of the morning sun, and the hoolock gibbons join in to announce the dawn of a new day in this remote corner of India. The river appears deceptively calm and, indeed, you can feel its power only when you are on a boat or atop an elephant trying to cross the flowing waters.

Although Deban has many new experiences to offer, it is the interiors that are even more magical. The Forest Department usually clears a path on the northern banks of the river which takes you through a tour of the Haldibari –Hornbill–Bulbulia-Rani-Jheel–Firmbase areas. There is no habitation inside, so the feeling of immense solitude is overpowering. The forests here are dark and deep, and the trees stand tall peering down on you. The light that filters down to the leaf litter is dim and makes the insects, flowers and fruits on the forest floor literally glow — like the red flowers of Sapria Himalayana, which appear to fluoresce in the backdrop of dark brown and green. These root parasites are pollinated by carrion flies and exude a horrible stench to attract them. You will also find the fruits of the rudraksha trees littered on the path to Bulbulia (14 km from Deban). I stayed a couple of days at Haldibari, which is only 6 km from Deban, but the most enjoyable stays were at Hornbill (11 km from Deban) and at Bulbulia (14 km from Deban).

Hornbill is named after the birds that come to roost there in the evenings. Once inside the forest, the only places where you will see a good expanse of sky are at the campsites. All else is covered by a dark green canopy. In the night, flying squirrels come very close to the campsite and you can see their eyes reflecting the light of the torch. If you are lucky, you can hear the low rumbling of elephants, but seeing them in these dense forests is difficult. 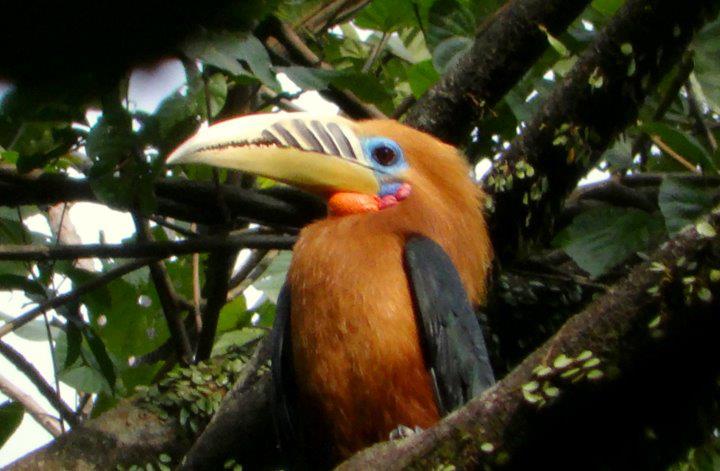 This place is for the birds and the bees! Silver-eared mesias, bar-tailed cuckoo doves, emerald doves, blue-bearded bee-eaters, blue-throated barbets, redeared bay woodpeckers and many more fascinating birds belong to this region. The magnificent peacock pheasant is also common but is more often heard than seen. The place is a treat for butterfly lovers and, on bright sunny days, all you need to do is find a wet patch and wait for the species to come. One has to keep one’s eyes peeled as they provide at the most a fleeting glimpse. Again if you are lucky, you might be rewarded with a glimpse of many dragontails congregating to drink near a stream.

Bulbulia is a hot spring (or poong) and the area around this bubbling spring is covered by a grey gooey slush that you can smell a kilometre away. If you light a match over the spring, lo and behold, a little fire dances long enough to take a picture! Each time I went there, I would make sure to have a small mud bath because the warm grey ooze definitely cured all the itchy insect bites for good! If you stay there in the night, you can get lucky and hear elephants in the nearby forest. However, animals, especially the large mammals, are so wary of people that a whiff of a human and you are left with a whiff of the animal!

Rani Jheel, which is another 4 km from Bulbulia, is a small pond 800m high on a plateau and surrounded on all sides by forests. It is thought to be an ideal place for the rare white-winged wood duck. I did not see any there, but just going and searching for them was an experience in itself. The forests here are extremely old and, as you walk along a ridge, all you have for company are the tall trees around you.

If you are lucky, you will be graced with the sighting of a yellow-throated marten as it ambles along the forest floor. On one of my walks from Bulbulia to Rani Jheel, I was accompanied by Aphu Yesa, a Lisu tribal. The members of this tribe have acquired an infamous reputation for decimating the wildlife of the park. Aphu Yesa, who walked me then, lives no more, having lost his life to some unknown disease — the hardship of living more than 150 km from any decent medical facility.

I got a glimpse of their amazing knowledge of the forest on that walk…. He suddenly stiffened and, with a sense of great urgency, walked uphill about 200m along a small path. I followed wondering what he was up to, when on the way, he pointed out the pugmark of a large tiger on the wet path. Our walk ended at a place where a full-grown sambar lay dead in the thrashed undergrowth. I was shocked and asked Aphu how he knew we would find this here and he said that he heard the flies at the carcass, something my ‘civilised’ ears did not manage to pick up!

Namdapha is truly magical for me and each time I leave the park, I leave with a part of the place within me. I have not seen such unfettered wilderness elsewhere and given the problems besieging the park now, it would be a grave loss if these forests are to decline in their beauty. The park cannot be saved without involving the local people and it is important that they are made part of the conservation and revenue generation activities related to the park.

Namdapha Tiger Reserve spans almost 2,000 sq km of mainly uninhabited tropical forest and contains habitats from riverbanks (200m) to the snow-covered peaks of Daphabum (over 4,500m). Because of this range in altitudes, Namdapha is said to be home to all the four species of large cats — the tiger, the leopard, the clouded leopard and the snow leopard! It started life as a Reserve Forest and was declared a Wildlife Sanctuary in 1972. In 1983, it was declared a National Park and a Tiger Reserve, under the Project Tiger scheme.

The park was devoid of any habitation until the late 1980s after which some encroachment by the Lisus have been reported from within the park. The other main tribes that live in the region are the Singphos, Khamptis and the Tangsas. The western banks of the Noa- Dehing just outside the park are inhabited by the Chakma refugees who were settled in the area in the 1970s. The park faces enormous pressures, chief being the lack of conservation awareness and that the locals obtain no monetary benefit from the presence of the park. The problem is particularly acute for the Lisus, whose growing population does not have any other area to expand into but the Tiger Reserve. Their village of Gandhigram is hemmed in on three sides by Myanmar and on the fourth side by the Namdapha Tiger Reserve.

If only the native tribes of the region were to be involved in eco-tourism activities and exposed to the potential revenues they could earn from protecting their wildlife, Namdapha would be assured of a good future. Currently, there is no political will to involve the local people’s participation in the conservation of the park.

Furthermore, hunting has always been a major part of the Arunachali tribal culture. Some of the tribes decorate their headgear with hornbill beaks, and use bear and langur skin and tiger jaws to adorn their daus (a kind of sword strapped across the shoulder). It is also interesting that the display of animals, especially the large cats, on their dress is ritualistic in nature and even exhibits the person’s social standing in his society. Developing awareness amongst the native tribes about the importance of protecting wildlife should hopefully help get rid off this problem. 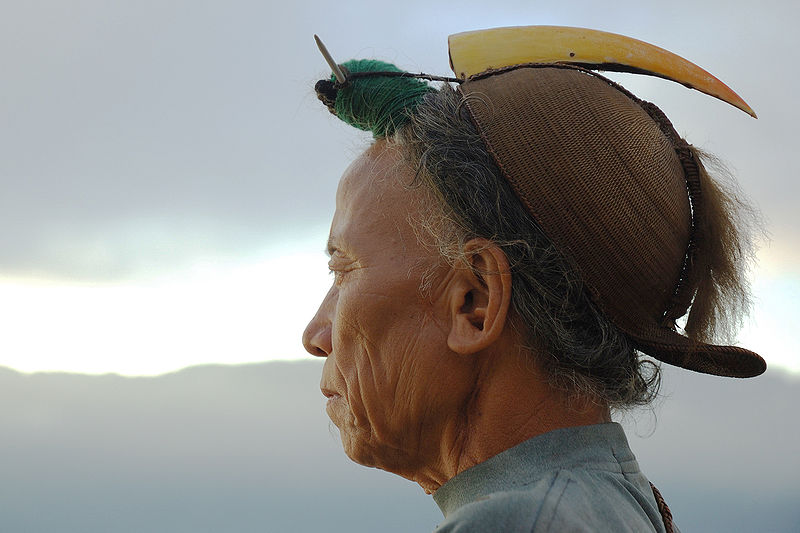 On the flip side, it is extremely sad that the tourists who visit this otherwise vibrant and interesting corner of India have to enter and leave the park without any meaningful interaction with the Arunachalis. Unfortunately, there is no shop that sells their food produce (dried persimmon, black cardamom, fermented/ dried bamboo shoots, different tubers) nor can a tourist buy the colourful handwoven cloth designed with the colours and patterns typical of each tribe. The local people weave pretty cane baskets for their own use and it is difficult to procure them at short notice.

Visiting the place during the Namdapha Festival would be ideal but the downside is that all the staying facilities are booked at that time. If you are terribly adventurous, you could request some of the locals for permission to tent up in their backyards! Also, you could check some of the shops near the checkpost at Namchik (through which you enter the state) if they have the colourful hand woven purple and green khamtpi lungis. These make lovely gifts for friends since they can be converted into beautiful shirts or skirts. Perhaps you could also visit the Lisu camp in Miao and enquire if any of their baskets are available for sale — it will be difficult but worth a try!

Location: The eastern-most Tiger Reserve in the country, it lies in the Eastern Himalaya,

adjacent to the Myanmar border in the North-East

Route from Dibrugarh: NH37 to Makum via Tinsukia; NH38 to Ledo; state highway to

When to go: The driest months of the year are between October and February. November is said to be the month with the least number of rainy days. However, to see butterflies, reptiles and amphibians, the rains are a good time to visit.

Useful contacts: Phupla Singpho (Mob: +91-94352-28763) runs the conservation NGO, Sea Cow, in Miao. Any contributions to its efforts are always welcome. It now has a tie-up with Help Tourism. Help Tourism runs the tourist resort Camp Namdapha and is fairly wellinformed; helptourism.com

Vidya Athreya is a wildlife biologist with a fondness for tropical forests. She first visited Namdapha in 1995 when she went there to survey the clouded leopard.