A sinewy grey streak bolted through the jeep’s high-beams and down the rough dirt track of the Gangau Sanctuary, where we’d gone for one of the few night safaris on offer in India’s national forests. It was nearing midnight, storm clouds were gathering overhead, a few guests were shivering in the surprising March chill, and the animal, whatever it was, had shot off in the opposite direction from camp. Our spotter, Shekhar, a wildlife researcher studying smaller wild cats in Panna National Park, was not deterred. “Just keep going,” he said. “This is something interesting.” Something fast, maybe. Something blurry. But interesting?

The jeep rumbled in pursuit. Before long, Shekhar caught the animal in the spotlight again, about 50m away, on the edge of the trees. It paused and looked back at us, then loped into the brush. “It’s some kind of cat. Just keep going,” Shekhar said. He knew that this species of animals was by nature curious, and that it would double back to see what this flashing spotlight was all about. Sure enough, a few minutes later, the cat returned to trot along the road, allowing us closer and closer until finally it paused against the hillside in a culvert, squinting into the spotlight. “It’s a grey coated leopard cat,” Shekhar said. “Very rare.” It wasn’t a tiger or a leopard, but it was rare and beautiful and wild, and not until long after it had padded into the forest did we remember the cold and the approaching storm. I thought it ironic that the best wildlife sighting I’d had on my safari occurred outside the boundaries of Panna National Park. But as I discovered soon, it wasn’t all that strange. The lesser cats actually prefer degraded forest, Shekhar explained, because the sparse ground cover offers better hunting opportunities. This is one of the benefits of travelling with an expert guide — you learn so much more about the habitat you are visiting. 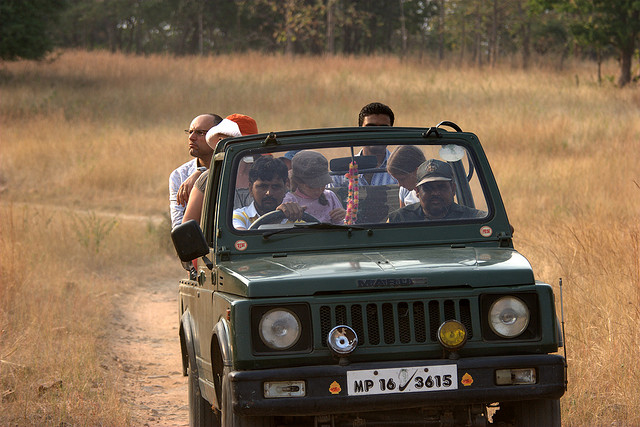 On my first day at the Ken River Lodge — by far the best option for tourists with money to spend — I woke to the tea boy’s peremptory knock at five in the morning, only to open the cottage door to a steady drizzle. Though it was March, a storm front had stubbornly parked itself over central Madhya Pradesh, which made it all too probable that the park would be closed. A smarter, less optimistic man would have merely rolled over and gone back to sleep, but I put on my windbreaker, grabbed a torch and headed for the treetop restaurant that serves as the lodge’s base of operations. I was staying in woodsy luxury in one of the lodge’s three-room cottages, the downside being that I was a five-minute walk from my morning tea. Nobody had started the generator, so I made the walk in pitch black and landed up at the treehouse soaking wet, only to find a group of similarly wet, sleepy, bewildered and tea-less tourists. Our hosts and guides, having wisely judged that the park would be closed, had gone back to sleep, neglecting to cancel our wake-up call.

I spent as much of my second day inside Panna, taking morning and evening rides during which I spotted most of the more common species and had a tense moment waiting in a thick grove for a tiger to appear as alarm calls sounded all around us. The morning ride was more pleasant — and fruitful — than the evening one, when we had to head for the exit just as it cooled enough for the animals to come out. For that reason, on day three, I tried again to spot the tiger in the morning, then took the park’s crocodile-spotting boat ride, observing a few crocodiles and some beautiful water birds. All these activities are available to tourists staying in the Forest Rest House, any of Panna’s private lodges or in Khajuraho. 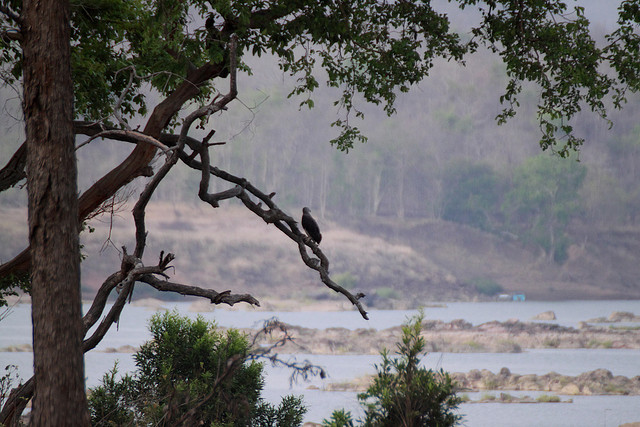 In the afternoon, I opted out of the baking ride through the deserted savannah in favour of a ride upriver in the Ken River Lodge boat. Because we made our trip near sunset, just after a cooling electric storm passed over the area, it through the park. I spotted at least a dozen species of water birds, including close sightings of a grey-headed fish eagle and a baby owl so well camouflaged it was practically invisible on a mid-river outcropping of rocks. The trip also allowed for a stop at Bahaargunj Jungle Village, the other property owned by the Ken River Lodge group that offers rustic but beautiful accommodation on the grounds of the hunting lodge of the Maharaja of Panna. Built according to the traditional methods of local villagers, these six mud-plastered huts are surprisingly comfortable and attractive, with thick, cooling walls and painted floors. No coughing generator disturbs you here. The jungle village has no electricity. And the cheetal, sambhar and wild boar come right to your doorstep. When I visited, the Forest Department elephants, tethered in a rustic camp next door, had just punched out and were trying to arrange an early dinner, picking the lids off their food bins when the mahouts weren’t looking. A baby elephant was the star attraction.

Established as a National Reserve in 1981 and made part of Project Tiger in 1994, Panna is one of India’s youngest tiger reserves. Spread over 542.67 sq km, Panna National Park was created from the hunting reserves of the princely states of Panna, Chhatarpur and Bijawar. In 1975, the north and south Panna Forest Divisions were declared as the Gangau Wildlife Sanctuary. 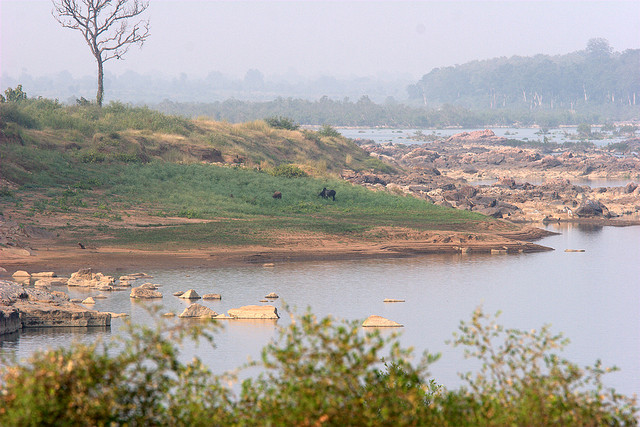 There are a few villages inside the park’s boundaries, and it hasn’t achieved the fame of nearby Kanha or Bandhavgarh, where the forest staff can (or could until very recently) virtually guarantee a tiger sighting. In some respects, that is a blessing. Unlike in Bandhavgarh or Kanha, you don’t have to follow a queue of jeeps into the reserve and sit idling in exhaust fumes as you wait for a 30-min lumber through the bushes on elephant back. On each of the four days I spent in Panna, the three jeeps bearing guests of the Ken River Lodge were the only ones in the reserve, resulting in a brilliant trip for a daydreamer with fantasies of uncharted jungle tracks. This lack of tourists is remarkable, given the park’s wonderful location. Trees common in Panna include teak, tendu, mahua and salai. Panna claims to host as many as 35 tigers (estimates given by the park) but a more realistic figure would be about 20. In recent times, however, there have been reports that the tiger population in Panna is declining. The national park’s proximity to diamond and sandstone mines proved detrimental for its denizens, and its fragile environs were polluted because of mining activities of the National Mining Development Corparation (NMDC) of Majhgaon/ Hinouta. (Legend traces the Kohinoor diamond to this sleepy town in Madhya Pradesh.) The NMDC mines were shut down recently because of a lawsuit filed by the park authorities.

State: Madhya Pradesh Location In the Vindhya Range, on the outskirts of the ancient town of Panna, which has Asia’s largest diamond mines

When to go: The park is open from Oct 1 to Jun 30. The most comfortable time to go is Nov to Mar Best sightings May-Jun