Keoladeo Ghana National Park is a gem in India’s ecological crown despite being one of the smallest parks in the country. Declared a World Heritage Site in 1985, it has had to withstand devastating drought in recent years, which has caused lasting damage to its unique wetlands. It was like witnessing a miracle, therefore, to visit Keoladeo in the monsoon of 2005, when the area was seeing the wettest July in the past 20 years. Farmers had lost their crops and bridges had been washed away. But there was a glimmer of hope — perhaps the National Park could now regain its former glory.

Washed out or not, the monsoon is one of the times when maximum avian activity occurs in the park, a fact that often gets lost in all the attention that winter and the accompanying migratory birds receive. During the rains, some of India’s most spectacular birds deck themselves out in their finest plumage, get together to court their mates and nest in huge colonies in the trees lining the paths of the sanctuary. July marks the beginning of this season. 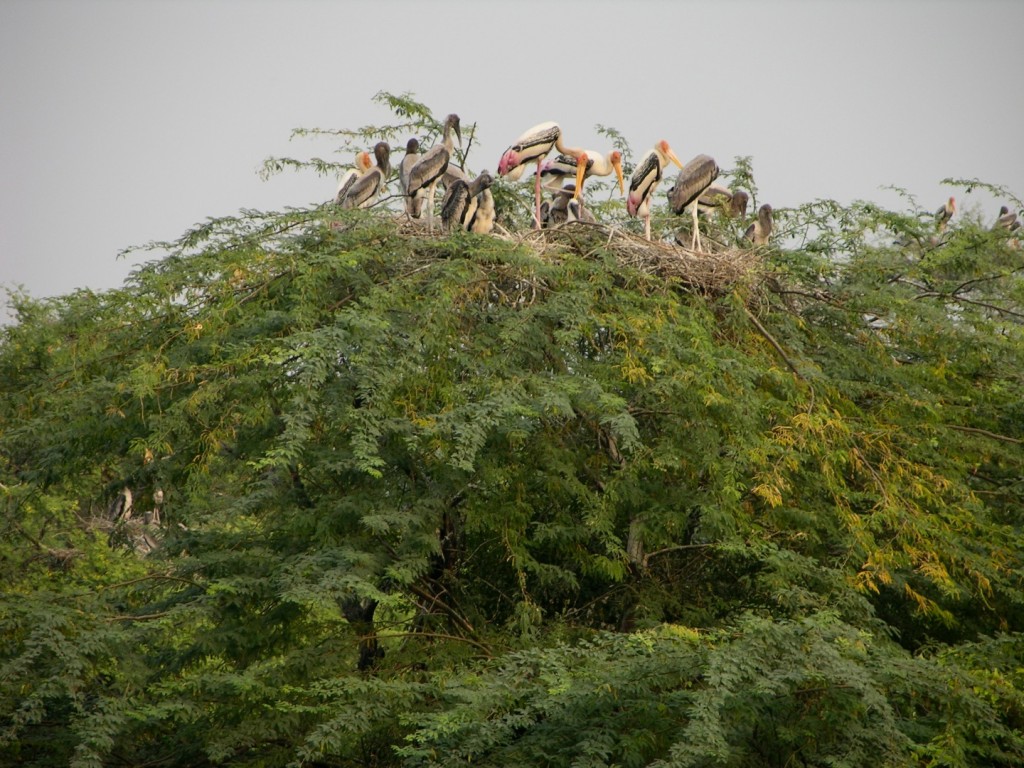 From where I stood, water stretched as far as the eye could see on a muddy bank. I was accompanied by one of the trained naturalists in the park and a cycle rickshaw- puller-cum-guide. Above us, long red legs extended to negotiate a tricky landing. An open-billed stork descended into a babul tree, only to be pecked by his neighbour; it fell out and flapped off to a nearby perch. As is the case among humans, location is the primary thing when birds build houses — no self respecting open-bill allows another to trespass on its prime few square feet of treetop. There was a cracking sound across the road behind me and I turned to see another open-bill stork wrestling with a small branch it fancied as building material. Almost in slow motion, it grasped the branch in its heavy bill and wrenched it away before jumping into the air and solemnly flying to its nest.

A pair of open-bills arranged the twigs together around the bowl of their new home. Another pair were mating — a brief affair, and some, having got all the preliminaries over, sat on their eggs, eyes half-shut, looking profoundly content. I was sure that they would not look so happy once the chicks were born. They grow at a great pace and constantly demand food in loud voices. The colony of storks then dons a busy look, with parents flying in and out so fast that an Air Traffic Controller would have a heart attack. 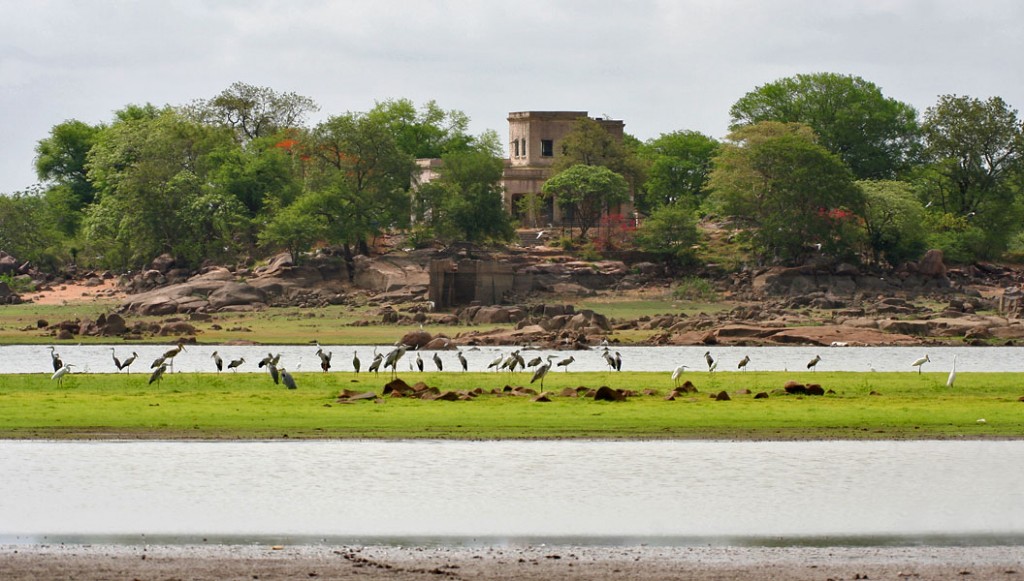 The colony I saw was a multi-cultural avian metropolis. Amidst the black and white storks were snow-white large and intermediate egrets sporting delicate breeding plumes. Grey herons held their black head plumes erect as they interacted with their neighbours. Blackheaded ibis on the uppermost branches raised their wings to reveal crimson armpits, and darters or snakebirds, each dark glossy feather outlined in pale shimmering colour, gulped fish down their long, elastic throats. Small cormorants, neat and dapper with streaks of white behind the ears, filled the empty branches. The cacophony of painted storks, with their yellow bills and pink and white behinds, has to be heard to be believed. They are a hungry lot too. Studies estimate that the 2,000 painted storks in the nesting colonies require 4 to 6 tonnes of food each day and, in the 30-40 days they breed, they consume 1,200 tonnes! And we are talking only about one species here.

Hopping along the road in front of us as we strolled towards the Keoladeo Temple in the centre of the park were some of the permanent residents, easy to dismiss as little brown jobs, or LBJs as they are called by birdwatchers. These were, in fact, the creatures responsible for Salim Ali, India’s greatest ever ornithologist, first taking an interest in birds. As a child he had been given an air gun and had amused himself shooting some of the plentiful birds around him. One day he shot what he assumed was a common house sparrow. Then he noticed it had a yellow throat, was fascinated, and began to investigate what it could be. His observation of birds started here and never stopped until his dying day. However, these little creatures are no longer called yellow-throated sparrows. They have now been christened as chestnut-shouldered petronias. 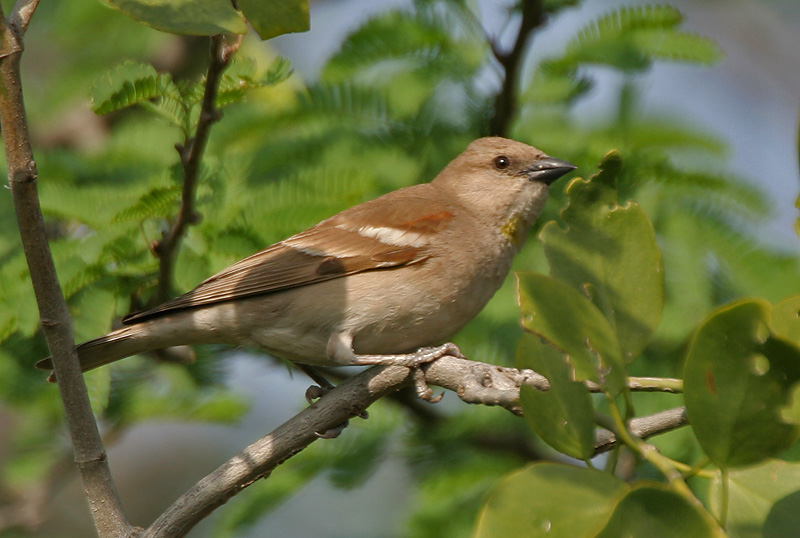 While rains bring their own glory, winter remains a splendid time to visit the park. When Keoladeo Ghana was made a World Heritage site, its guests in the cold season included the Siberian cranes, with bills and faces as red as if dipped in blood, white plumage that was simply peerless and outstretched wingtips pitch black like a dark night. Sadly, the world proved too unfriendly a place for the flock that came to Bharatpur, which were driven away by consecutive years of drought. Siberian cranes are now on the verge of extinction because of habitat loss and hunting. The last documented sighting of Siberian cranes in India was during the winter of 2002. It would require a real miracle to bring these cranes back now, and one can only hope for one. The comforting factor is that although the vegetarian Siberian cranes are gone, it is still possible to spot delicate demoiselle cranes, common cranes, or our very own resident crane, the sarus, which now needs our protection so that in future years it will not meet the unfortunate fate of its Siberian relative.

Despite the fact that the Keoladeo Ghana National Park is surrounded by human habitation, it has maintained an atmosphere of the wild. On my most recent trip, I sat in the back of the rickshaw as the sun set. We stopped at regular intervals to see, not just the birds but also the mammals. Mature nilgai, cheetal and sambar were grazing close to the road and from far off came the eerie wailing of countless jackals. A watersnake held its head aloft above the water, a turtle basked on a branch, a monitor lizard — some excited young boys identified it as a crocodile — ambled across the road. A cormorant held out its wings to dry, silhouetted against the sky, and I felt the satisfaction and happiness that even a short visit to this park could bring. 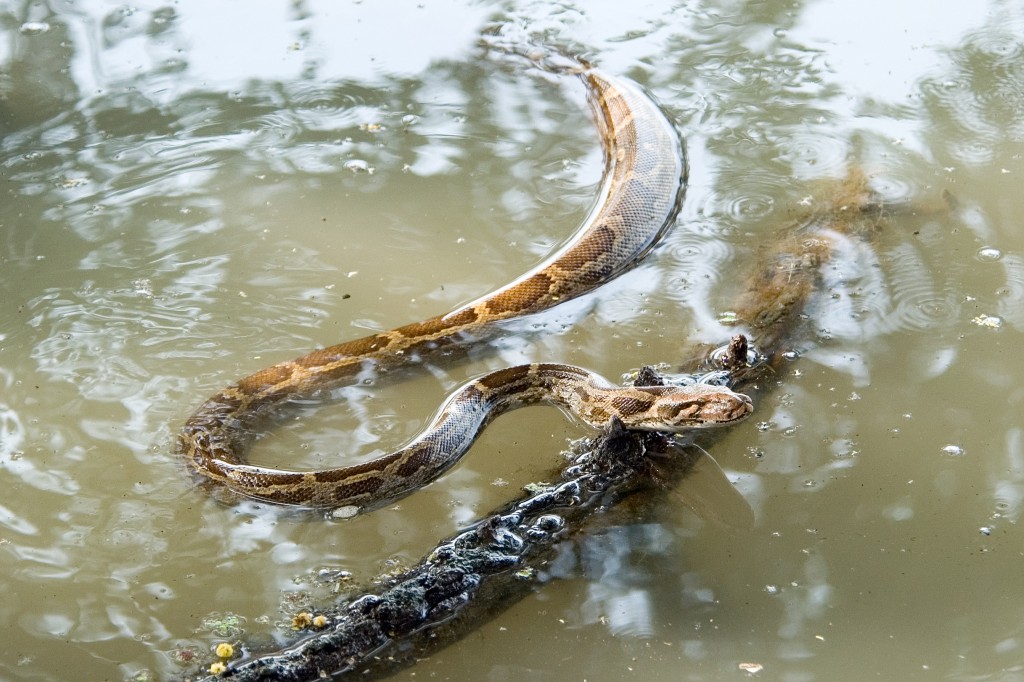 Keoladeo is actually a name of Lord Shiva and is the form in which he is worshipped at the small temple in the heart of the park, near a canteen that serves a welcome cup of hot tea. Ghana refers to the thick tree cover the area once had. This sanctuary is known by the name of the adjoining town of Bharatpur, which is also the name of the king who created the park in the late 19th century. He recognised the potential of this area of scrub woodland that formed a slight depression, a hollow region where water could be collected to attract water birds until it dried up.

By diverting water from an irrigation canal, building small dams and constructing a system of dykes and shooting butts, he succeeded in converting it into one of the richest wetland habitats in the world. Conservation was, however, a by-product of his main purpose — shikar. He entertained all the big guns of his time, including viceroys and Indian princes. Their exploits are recorded on a sandstone inscription near the Keoladeo Temple. In 1956, the hunting preserve was declared a sanctuary but the VIP shoots here continued until 1964; the royal family maintained their hunting rights until 1972. It is perhaps ironic that bird numbers seem to have decreased after hunting stopped. Other problems have hit the park, one of them being the decline in the number of migratory birds in their summer homes, drought, and buffalo and cattle straying into the park from nearby villages. Pesticide contamination in the water bodies is a cause for concern too. The huge number of tourists visiting the park has also contributed to the park’s decline: many leave behind litter and plastic, adversely affecting the water quality in the swamps. It’s, therefore, all the more important that you leave behind nothing but your footprints in the Keoladeo Ghana Park. 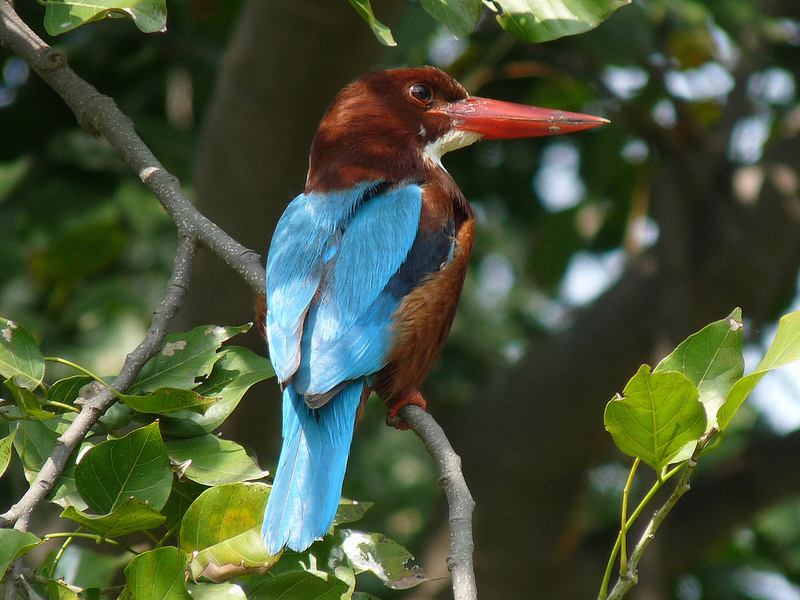 The shallow freshwater lakes, which make up about a third of the park’s 29 sq km area, comprise just one part of this fauna-rich region. Some 350 species of birds are visitors here while about 120 species nest in the park. Keoladeo Ghana also boasts of an amazing variety of flora, and as many as 181 genera are to be found here. Besides the babul, indigenous trees seen here include kadam, date palm and khejri and dozens of species of grasses and reeds.

State: Rajasthan Location In north-eastern Rajasthan, near the Uttar Pradesh border, within the golden triangle of Agra, Delhi and Jaipur, just off NH11

When to go: The park is open throughout the year. Aug-Oct are the peak months for breeding and Oct-late Feb for migrant birds. However, whatever time of the year you go, there will always be interesting birds to see Best sightings From Nov to Mar, when migratory birds flock to Bharatpur

Go there for Birds

Gillian Wright is an author and journalist living in New Delhi. She is keen bird-watcher and was one of the first people to see bristled grassbird in Delhi after a long absence. 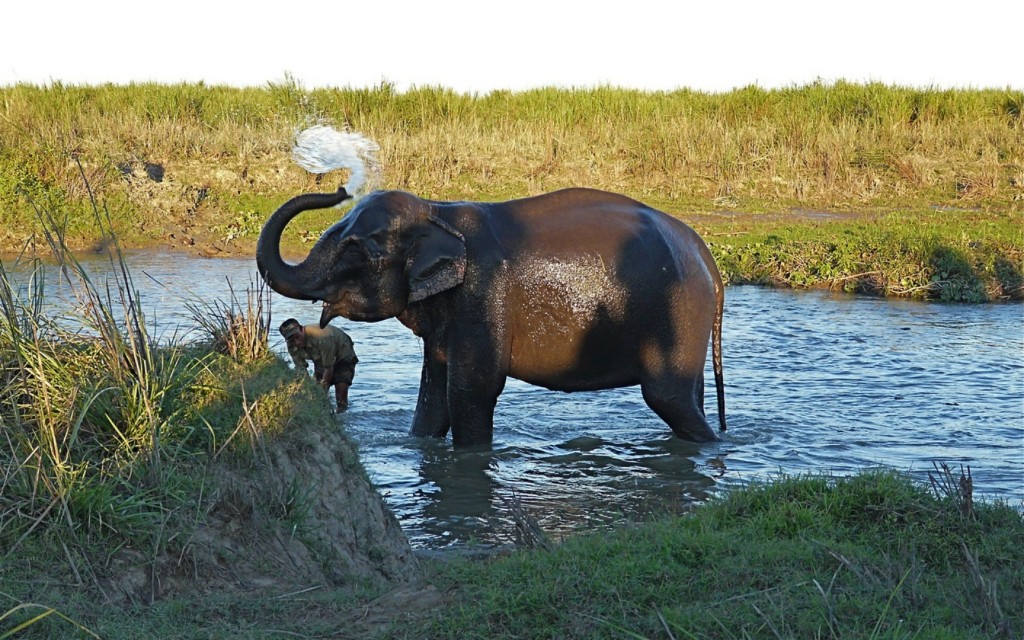 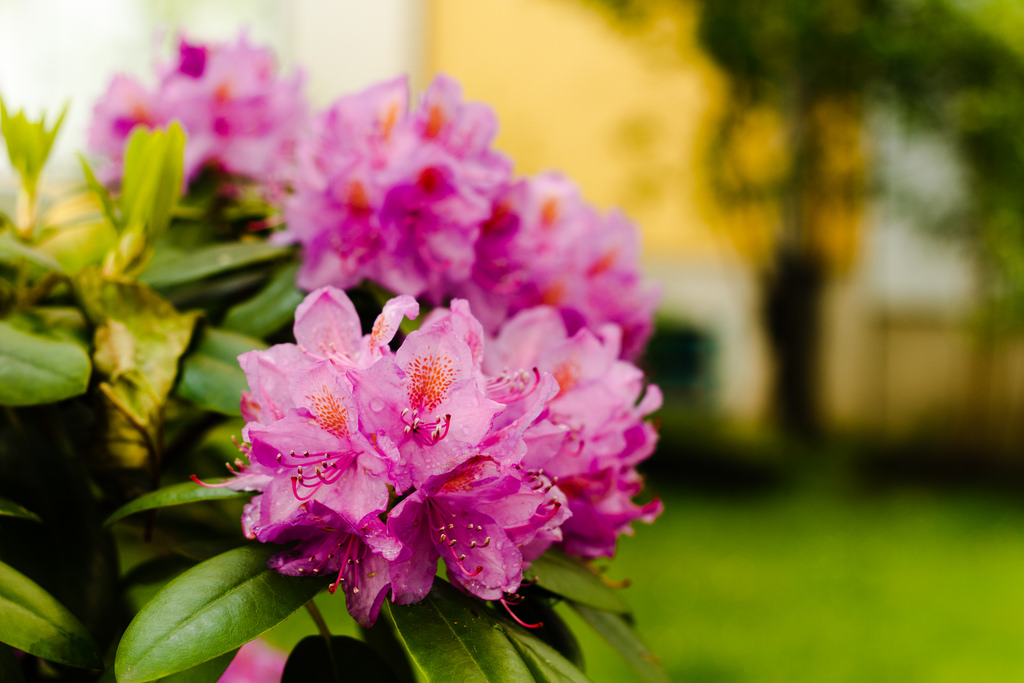