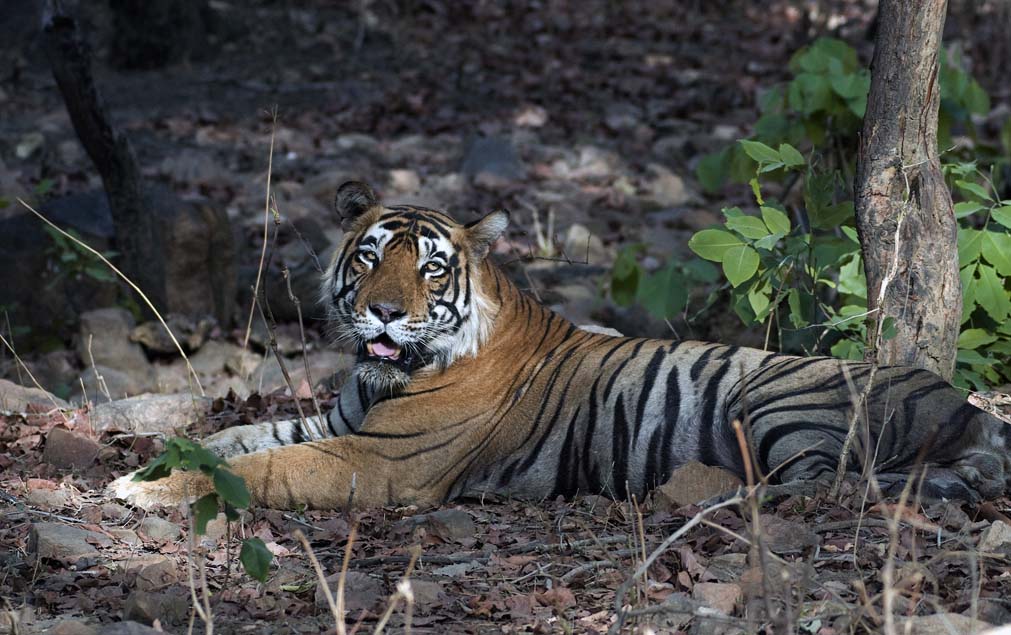 Antique rock crumbled under my feet and bounced down the side of Ranthambhore Fort to the sprawling, dusty forest below. I walked into the skeleton of a house broken into by the roots of trees, and standing on a carpet of grass, looked out of a thousand-year-old window. Ranthambhore is magic. The place is full of romance and intrigue — tenth century ruins smothered by roots, herons sharing lakes with holy men and a million myths about Raja Hamir and the glory days of the ‘impregnable’ fort. The fort’s fall, along with that of the one at Chittorgarh, is what is credited with breaking the spirit of the legendarily resilient Rajputs and the establishing of an undisputed Mughal Empire in India. Locals still visit a Ganesh temple here, as did their ancestors. And like them, they must walk through tiger forests to do so. My pilgrimage was longer. Leaving the madness and grime of Mumbai late one evening, I arrived to the bright light, cold air and red brick of Sawai Madhopur Station the next morning. If all journeys are metaphors, this is an especially poetic one, the scene changing from Maharashtra’s city slums at dusk to benign open scrub and field of the Desert State at dawn. And as I moved out of mobile coverage area, I found myself shedding all urban angst, counting Indian rollers, blue jays, tree pies… and actually noticing three distinct shades of blue in the sky. Once at Sawai Madhopur, the short drive from the station to the park was equally un-creasing; apart from the busy market place at the start of the journey, it was all camel carts, heaps of guavas and that dazzling mirror work on the outfits of Rajasthani women sauntering by… 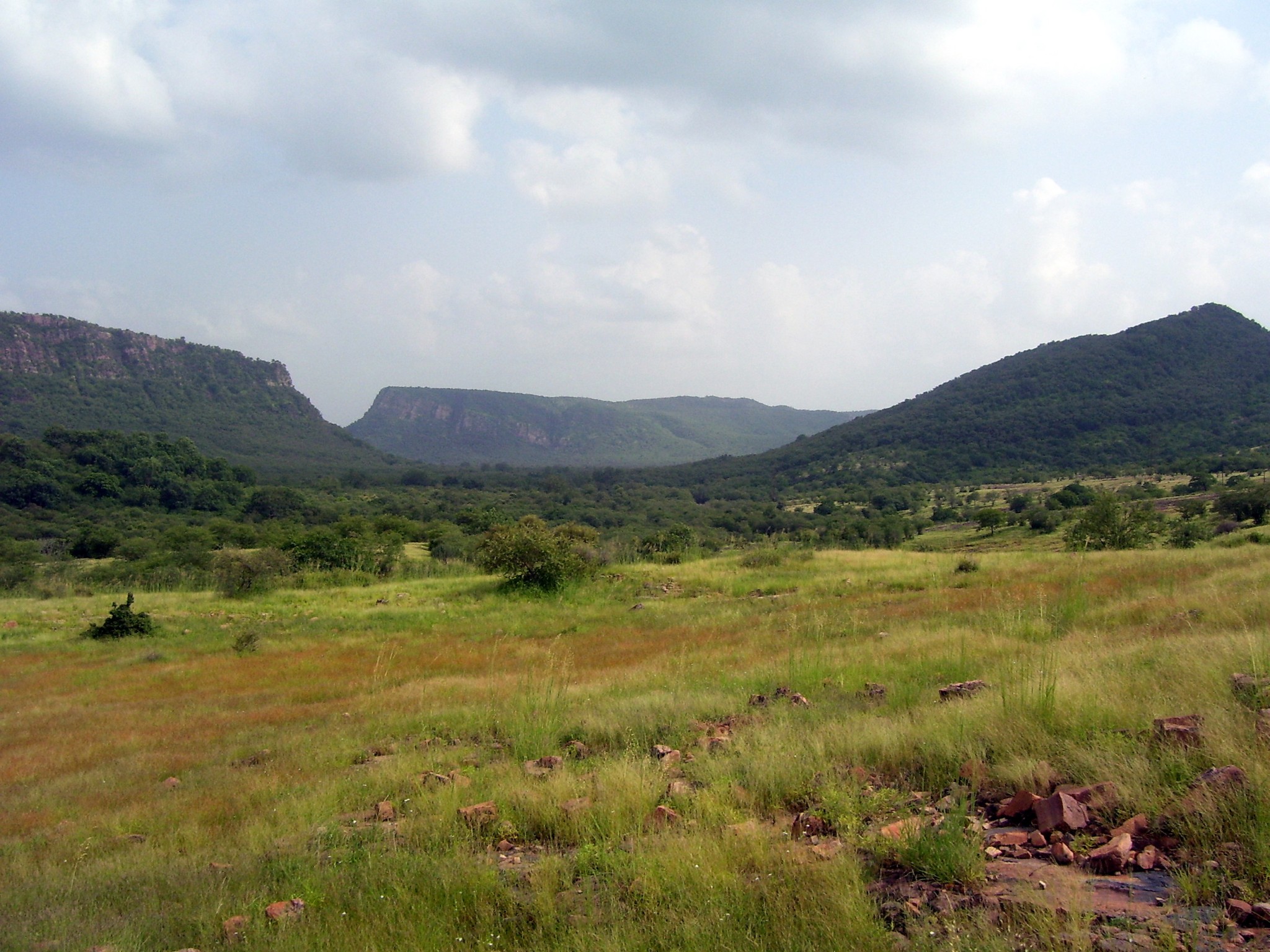 Once inside the main gate, a canopy of trees provided shade and the air was at least a few degrees cooler. My open-top gypsy added whiplash wind to the experience, and at the ticket counter I was greeted by Ranthambhore’s omniscient presence — a tree full of langurs. Scavenging on the left-overs from pilgrim picnics, screeching for attention, somersaulting, they landed with unnerving thuds on the tops of tourist buses, and in one case, even urinated to the disgusted delight of schoolkids.

Ranthambhore National Park is a popular holiday destination and, in winter (the best season weather-wise), it is often full of noisy tourists on an obsessive search for tigers, talking noisily while waiting for an audience with The King. It is hard not to hope for tigers when you’re in Ranthambhore, but there is something tainted about tracking them with walkie-talkies and harassing them with a constant barrage of gawkers. The trick to getting the most out of the park is distancing yourself from the madding crowd and being satisfied just breathing tiger air. Suddenly then, everything about it becomes thrilling. 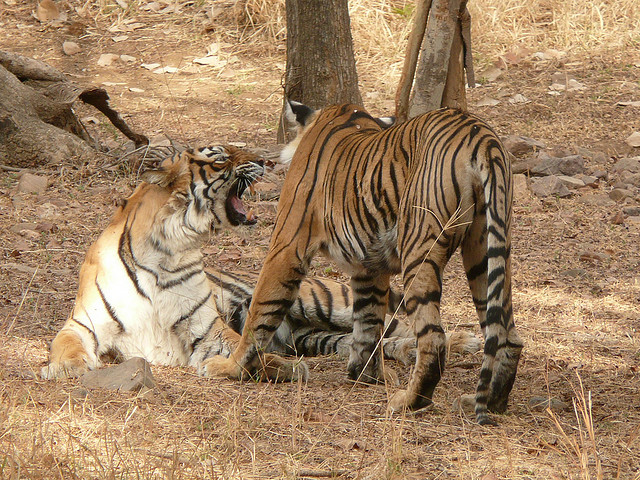 On my first day in the park, while watching cormorants dry their wings on a bare tree in the middle of Rajbag Lake, someone in the next vehicle swore they had spotted a tiger peeping through the window of a ruin far on the other bank. Everything looks like a tiger when you’re desperate to see one, I said, but around the bonfire at Ranthambhore Bagh (a lovely tented accommodation) that night, a photographer confirmed reports of a young tigress hiding her cubs there. The next day, back at the same spot, while a sambar stag foraged in the water, I had stripes on the brain. About a quarter of an hour later, for no apparent reason, the sambar stumbled out of the lake, antlers festooned with vegetation, and dashed off. The mother tigress had begun her languid amble towards me long before I had noticed her. Making her way across a sliver of land in the water — literally a catwalk across the lake — she stopped a stone’s throw from my vehicle, crouched down and began to drink. Close enough to see her whiskers quiver, the slapping of her flat pink tongue against the water was the only sound I heard for what seemed to be an eternity.

Finally, she crossed the path in front of us and walked ahead, letting us follow her in our vehicle for at least 20 minutes down the road before disappearing into the foliage. (Probably leading us as far away from her cubs as she could.) Tigers, my guide informed me, liked walking on the Forest Department’s un-tarred roads because they’re soft on the paws. As a result, the roads provide opportunities for incredible tiger sightings. Slightly peeved with the six vehicles blocking the path in front of me first thing the next morning, I was forced to join the fray waiting for their promised tiger (a tip-off from a forest guard.). There was no way any wild animal was going to make an appearance with those many people around, I thought. I was wrong. Not only did the tiger make an appearance, he was on a hunt. Slipping silently into the tall grass just off the road, he crouched, waiting. There was no prey as far as anyone could see, but soon there was a wretched yelp, immediately thwarted. A few minutes later, out came the gorgeous predator awkwardly dragging along a cheetal (almost as big as himself) by the neck. There, right on the road in full view of a few dozen awe-struck humans, he sat down and, half-hidden by the grass, began to feast. 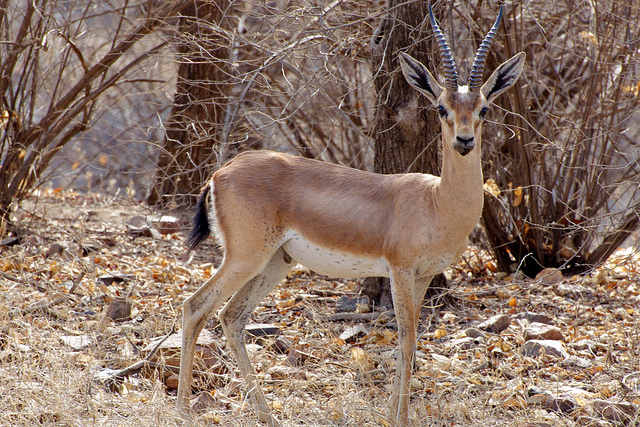 Not all trips to tiger reserves are this rich, I know. Even forests guards don’t see a kill in action very often — tigers are only successful once in 20 tries — and at the end, it’s down to luck. Leaving the park a few days later, as I drove past Rajbag, past Jogi Mahal, past Gomukh, past the soaring cliff face (where eagles nest and leopards hide), past the last racket- tailed drongo and dhok tree, I turned around just in time to see the ancient fort looming like a vision borne of opiate excess… Leaving Ranthambhore is like leaving a vital organ behind. You have to come back for your heart.

Location: Ranthambhore lies at the junction of the Aravallis and the Vindhyas in the southeastern
quarter of Rajasthan

When to go: The park is closed from Jul to Sep. It opens once again from Oct to Jun. Nov to Feb is the best time to head here, when bonfires make chilly nights enjoyable and the sunny T-shirt weather enables day-long journeys without the stress of summer heat. Mar, Apr and May are oppressively hot with the desert ‘loo’ — hot and dry winds that blow during the day — baking everything in its wake. On the upside, the dry summer months allow for some fantastic animal sightings through the bare vegetation

Tara Sahgal, 31, herbivorous, crepuscular and often arboreal, lives and works in Mumbai. She is editor of Sanctuary Cub magazine.