For the rulers of the erstwhile hill states, Hatu Peak was of great strategic importance because of its commanding position. It was accepted as a boundary between the states. The Gorkhas captured it early in the 19th century and established a fort at the top of Hatu Peak. Later, the British ousted them from the Hatu heights. Narkanda (2,708m), at the base of Hatu, offers a spectacular view of the snow-capped peaks of the Himalayas.

It stretches from the Srikhand Range in the east to the Kinner Kailash Range of Kinnaur in the north-west, and all the way across to the peaks of the Tons and Yamuna catchment in Uttarakhand. Hatu is famous for its ski slopes. A sub-centre of the Mountaineering and Allied Sports Institute at Manali (see Mountaineering Institutes on page 521) runs adventure activities here, and ski equipment is available in winter. Thanedar and Kotgarh near Narkanda form the apple heartland of Himachal. Samuel Stokes, an American, introduced apple cultivation here in 1905. This is an easy walk of 7 km (one way) to Hatu Peak and you can be back at Narkanda, easily, on the same day. But if you want to experience the thrill of the Hatu Ridge at night, take a tent along and camp out. 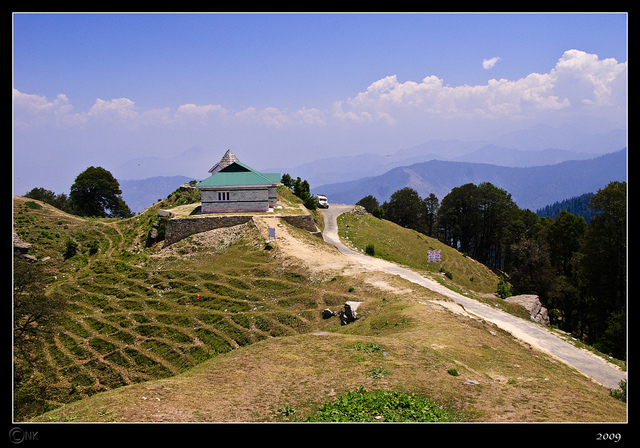 Hatu Peak is located 7 km east of Narkanda, on a jeep road. It’s best to follow this road. Take a few easy shortcuts across the switchback turns. From the Narkanda Bazaar, take the road going east to Thanedar. It meanders through a rich conifer forest. Less than a half hour along the Thanedar Road, at the further end of a little saddle on the ridge to our right (south), a small road branches off, heading a little south of east. A signboard indicates that the road leads to Hatu Temple. The entire walk is through a mixed forest covering the whole range of high-altitude conifers: blue pine, deodar, fir and spruce interspersed with the broad-leaved moru. Then come the kharsu oak, rhododendron, walnut and horse chestnut.

Shaded for the most part, the climb can still make one thirsty. However, water is not available on the trail, so carry enough from Narkanda. Every year, a fair is held here in May and several small dhabas and bustling tea shops come up for a few days. At all other times, you have to carry your own provisions. The route heads east up the gradually ascending ridge. Half-way up is a Gujjar kotha (temporary shelters of Gujjars who come here to camp with their herds in the summer) with a little pond reflecting the tall trees, the peaks beyond and the blue sky above. 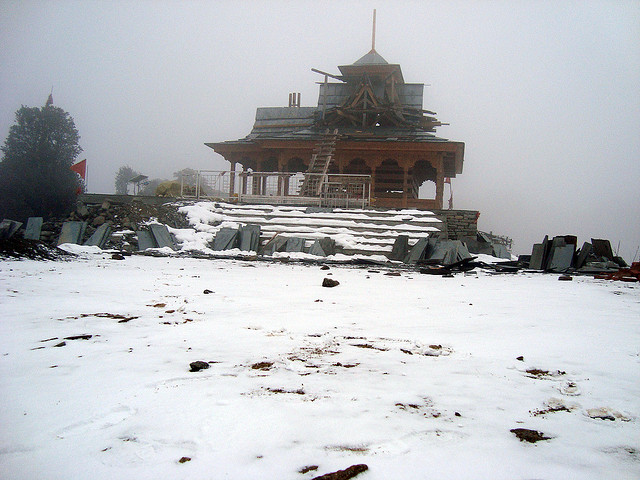 Hatu Mata Temple is located at the top of a long ridge with a more or less north-south orientation. At the northern edge of the ridge is a small shelter constructed by the PWD. From here, you can enjoy a 360-degree panoramic view. The snow-capped Himalayan peaks extend in a wide arc across the northern horizon while the hills and valleys of Rohru, Theog and Shimla spread out on the south and east. The villages of Kumarsain, Kotgarh and Nirmand can be seen amidst dense forests, terraced fields and apple orchards. An hour’s walk south-east past the temple, and then through a forest dominated by oak trees, gets you to the grassy meadows of Jor Bagh. The place is ideal for camping if one decides on a night out.

About the author: Deepak Sanan is an IAS officer, Himachal Pradesh cadre, who has trekked extensively in the state. His writings include a book on exploring Kinnaur and Spiti, as well as numerous articles about Himachal in magazines and books.