My eyes feast on the forest scene as we manoeuvre our jeep on the kuchcha tracks of the Bandipur National Park. There are trees with light barks, rolling hills and streams gurgling past rocks. There are chattering mynas, drongos and babblers. A herd of cheetal graze in a grassy patch and, above them in the trees, a langur troop munches on fruit. Our guide and driver, Ganga Singh, points to the dirt track and says, “Look, tiger tracks! No wonder there aren’t too many cheetal here this morning.” A bit further on we see more signs of animals: porcupines, sambar and elephants, all have walked this same dusty path a few hours ago.

Ganga Singh suddenly hits the brakes. I notice some movement between the pillar- like trunks of teak trees. A brownishblack mass is the source of our attention. An elephant? But as the massive animal emerges from cover, I discover that it’s a handsome gaur. Sinewy and standing tall at 6 ft, the beast sports a glistening coat, white stocking-ed legs and an impressive set of horns. It is said that the gaur are the largest wild oxen in the world — having seen this huge bull, I don’t doubt it. We spot the rest of the herd, which has over a dozen members, mostly females. 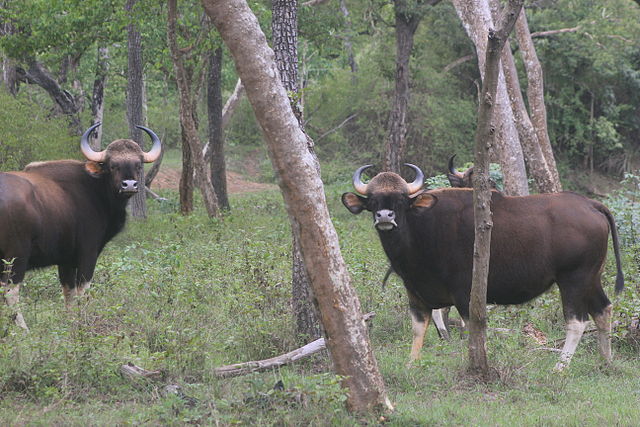 The forest seems to be full of gaur and we spot many during the drive. We encounter another herd comprising at least a hundred animals, all of them grazing on fresh grass bestowed by the monsoon. There’s more gaur action as two bulls lock horns — the sounds of their clash echo through the valley.

Ganga Singh brings the jeep to a stop near the Moyar Gorge. We walk down a small track to the viewpoint, which offers a panoramic view of the gorge and forests. In the background are the Nilgiri Hills, or the Blue Mountains. The gorge cuts through these hills, and at some places is nearly a thousand feet deep. Through this gorge, the Moyar River, now in its rain-filled rush, thunders away.

Stunned into silence, we sit absorbing the view. The hills are now green, but that’s the colour of the monsoon. In other months, they are usually clothed in brown, with kaleidoscopic splashes of green and bright hues, the patterns and colours decided by the plants in bloom — red in January and February, white and yellow in March and April, and multi-coloured outfits for post-monsoon months. 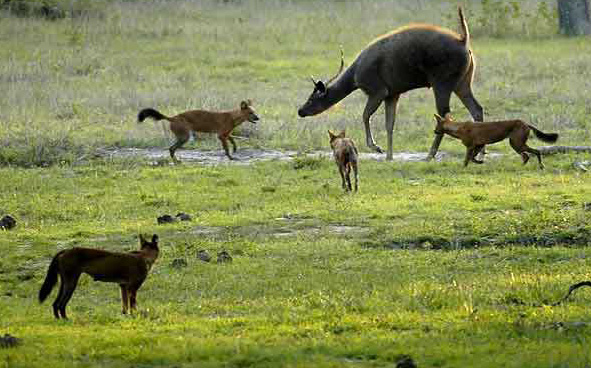 In the evening, we go for a safari in the Mudumalai National Park, which adjoins Bandipur National Park. The safari bus, operated by the Forest Department, winds through the forest and comes to a halt in front of a tall stone watchtower. Our present run through  the-jungle was not so rewarding in terms of wildlife sightings, but when the bus comes to a halt at the Moyar Watchtower, all complaints are forgotten. The tower, built like a lighthouse, stands deep inside the forest on the very edge of a cliff overlooking the Moyar Gorge. The gorge is so deep that I can barely see the river but as I follow my gaze upstream, the view suddenly takes my breath away. The Moyar River plummets down hundreds of feet into the gorge, disappearing in its own spray. On the other side, I see the forest canopy spreading like a green carpet, on which flit orioles, cuckoos and bulbuls. A pair of giant squirrels adds a bit of rufous to the predominantly green landscape.

During the following day’s safari, we see a magnificent young male elephant with tusks that almost reach down to his toes. He stands in a bamboo clump just beside the road. Lifting his head and trunk to reach the tender bamboo tips, he continues to eat, unmindful of our presence. Since elephant populations migrate, there is some chance that tourists might have to return without seeing any pachyderms, even in this high-density elephant zone. Even in the places where elephants live, tuskers, the prime targets of ivory poachers, are very rare. I am fortunate to see this magnificent tusker, and that too at such a close range!

My lucky run continues that evening. As the bus negotiates a curve, we catch sight of one of the most accomplished hunters of the forest — wild dogs. We spot four of them relaxing after, perhaps, a successful pack hunt. 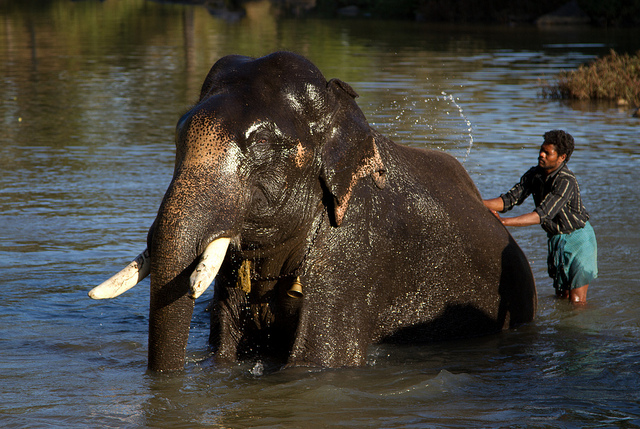 On my third and final day, I decide to skip the safaris and instead go for a trek (discontinued since then) inside Bandipur. I choose to explore some promising birding areas over a long trek to a hilltop. Even as my seasoned guide, a local hailing from the indigenous Kuruba tribe, leads me on the trail, deep resonant whoops of langurs announce our presence to everyone for miles around. Though we don’t see too many mammals on the trek, the birds don’t seem too bothered by our declared presence. Partridges, peacocks, hoopoes, bulbuls, babblers, bee-eaters, doves, noisy parakeets and mynas — all are busy courting and calling. The forest pulsates with the activity of breeding birds in the monsoon. Peacocks strut around with their brilliant, long trains of tail feathers, trying to impress peahens. Parakeets fight vociferously over possession of nest holes. Hornbills attend to their incubating mates tucked in tree holes. A hardworking pair of swallows makes endless trips back and forth with food to feed their hungry chicks.

The forest is alive! A few hours, a few days spent here are far too less to imbibe its essence. But the city drill beckons and, with a heavy heart, I head back to my cottage to pack my bags. I know I will return, soon.

Location: On the Karnataka-Tamil Nadu border, along the Mysore-Ooty Highway, within the Nilgiri Biosphere Reserve. Mudumalai is contiguous to Bandipur, separated only by the Moyar River from Karnataka. To the north-west of Bandipur is the Kabini River, beyond which lies the Nagarahole NP. The Wayanad WLS lies to its south-west Bandipur distances 220 km SW of Bangalore, 80 km S of Mysore, 80 km N of Ooty, 164 km NW of Coimbatore; Mudumalai is 11 km S of Bandipur

When to go: Anytime between Apr and Jan is a good time to visit, but it’s best from Sep to Dec. Though both parks are open throughout the year, they could be closed during Feb-Apr on account of heavy forest fires

Go there for; Tigers, elephants, gaur

Raman Kumar is a Dehra Dun-based ecologist  He has been associated with the Wildlife Institute of India and Forest Research Institute, Dehra Dun.