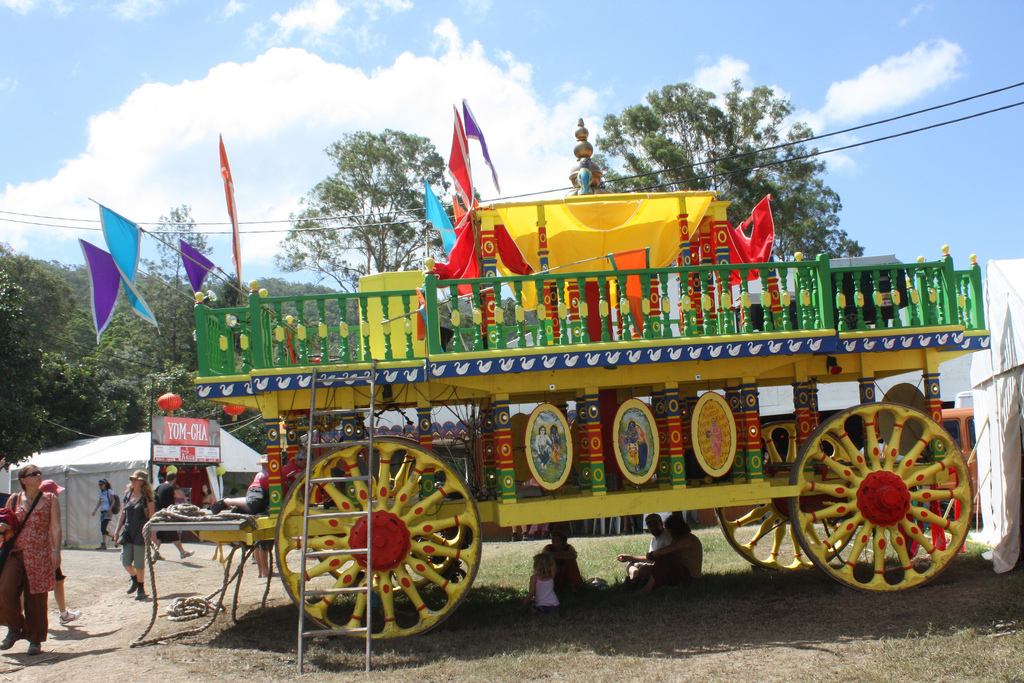 Jai Jagannath! These two words cast a magic spell on any devout Oriya living anywhere in the world. Lord Jagannath (Lord of the Universe) shares a very special relationship with Oriyas. For them he is Jaga, Kalia, Chakadola, Chakanayana… where else would you find devotees addressing their god in endearments? No Oriya household celebrates an auspicious occasion without extending the first invitation to this deity. And the day for his Rath Yatra is considered the most auspicious in the Oriya calendar for weddings, house warmings, and any inaugural events.

However, the unique aspect of the Rath Yatra (literally chariot procession) is that instead of devotees going to seek blessings from the deity, the deities themselves come out of their sanctum to mingle with all. The deities in question are the holy trinity comprising elder brother Lord Balabhadra, sister Subhadra and Lord Jagannath, a rare case of siblings being worshipped together. When Lord Jagannath, revered as patitapaban (saviour of the downtrodden), in a rare gesture of divinity comes out from the shrine to shower blessings on his devotees, the divine sight of him and his fellow deities redeems one from all sins. Said to be the largest religious congregation after the Kumbh Mela, the Rath Yatra in Puri spreads over 11 days (from the Rath Yatra day to Niladri Vijaya when the deities are carried back into the temple).

The largest draw of devotees is seen on the days the chariots are pulled: the actual Rath Yatra day and the Bahuda Yatra or Return Car Festival. This is the only occasion when everybody has access to the deities (only Hindus are allowed to enter Jagannath Temple, thus excluding, for example, many foreign-born devotees, such as ISKCON members). No wonder they climb on the chariots, touch the idols, even try to embrace their Lord. ORIENTATION Bada Danda, also known as the Grand Road, located in the heart of the pilgrimage town of Puri, is the central venue for the Rath Yatra celebrations. This wide arcade stretches from the towering Sri Jagannath Temple in the south to the Gundicha Ghar (temple) in the north. Lined with small and large buildings on either side, the 21/2-km stretch presents an unusual combination of modern glass and concrete structures rising amidst old dilapidated monasteries and ashrams. 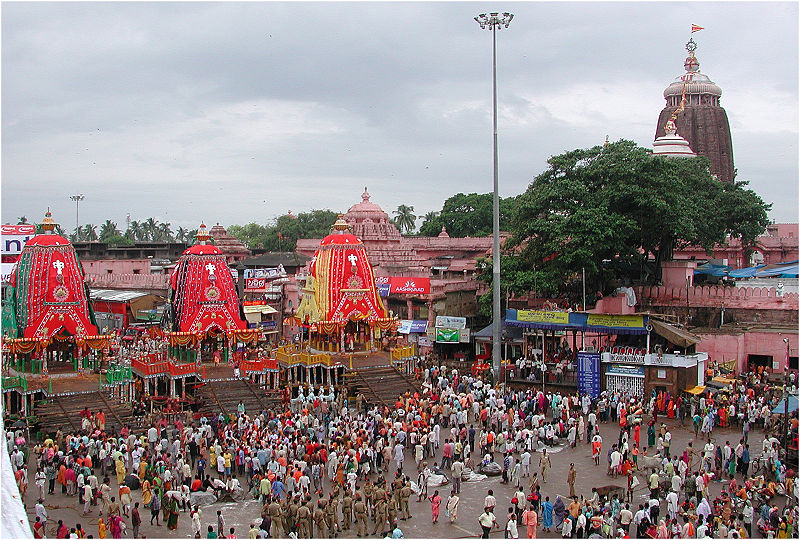 Narrow alleys branch out from this main road, leading to residential colonies, known as sahis. The Grand Road is basically a commercial centre with shops, hotels, offices, banks and more. Some of the important landmarks are the lime-washed white façade of the palace (built in 1918), the ornamental spires of the Sri Chaitanya Gaudiya Math, the town police station, the tiny Mausi-ma Temple (which occupies a prominent place during the Return Car Festival or the Bahuda Yatra) and the Municipal Hospital. While the road is slightly narrow towards the southern end, at the northern end it opens up to a vast sandy stretch almost 200m in width. Known as Saradha Bali, this place is the venue of large gatherings and exhibitions and is also used as the bus stand in normal times.On the Bada Danda, there is much to keep tourists occupied during the festival — bhajan sessions, folk music and dance performances, arts and crafts exhibitions that go on until midnight. Besides, the beachfront has its own attractions like camel rides, melas and sand art exhibits.

Greeted by the metallic sound of cymbals and the melodious music of kirtan groups, I find myself slowly inching towards the Jagannath Temple. Even at the relatively early morning hour, the Bada Danda seems to be fast filling up with people. In the far distance, I can see the three colourful chariots, with their flags fluttering in joy, as if in anticipation of the divine journey. The towering temple spires and the clear blue sky present a perfect backdrop to the three chariots. As the day advances, the crowd swells and by mid-morning the whole place is filled with people — packed like sardines on the road, balconies, rooftops, boundary walls, and even on the few trees nearby. While large groups of police personnel try to contain the swelling crowds, herding them towards barricades, volunteers can be seen providing assistance like distributing water pouches.

My attention is drawn to the variety of people assembled there, some in fancy dress outfits of mythological characters such as Hanuman, Sri Krishna and Lord Shiva. Why, it appears as if the gods themselves have descended on earth! Groups of ochre-robed ISKCON devotees swing away to the chants of “Hare Krishna”, while male Odissi dancers seem to be lost in their divine dance. A number of youngsters can be seen carrying miniature chariots atop their heads while some try to perform various kinds of acrobatics. Everyone is out to draw attention, or perhaps, it is their way of displaying devotion. Priests can be found making their way to the chariots with heaps of flower garlands and large mounds of tulsi leaves packed in fresh banana leaves. All eyes are focused on the temple entrance. The Pahandi — the ceremonial procession of the deities — is one of the main features of the festivities. The colossal wooden images, draped in new clothes and adorned with huge floral headgears (tahia) are carried by the priests from the shrine to the chariots. 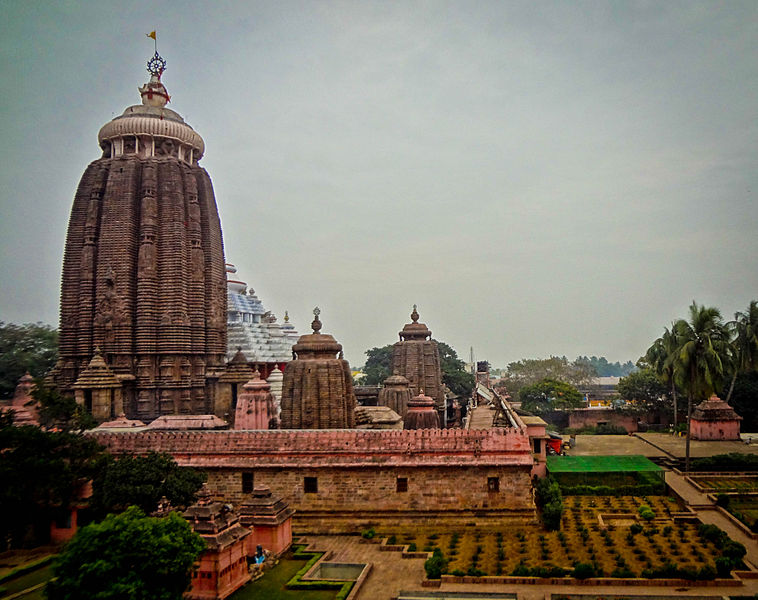 The swaying of the tahia, kind of dancing to the rhythmic movements of the ghantuas (those beating the gongs and cymbals), present a picture of perfect harmony between the servitors and their Lord. Accompanied by the chanting of shlokas, the gods ascend the chariots — Balabhadra, followed by Devi Subhadra and lastly, Lord Jagannath. Now it’s time for the royal ritual of Cherra Pamhara — the sweeping of the chariots. The erstwhile maharaja of Puri, said to be the first servitor of Lord Jagannath, is carried to the chariots in a gaily decorated palanquin. After offering obeisance to the deities, he sweeps the chariots with a golden broom. This service to the trinity is believed to be a symbolic gesture of intense humility before the lords. Well past mid-noon, the crowd and frenzy has reached its peak. The temporary steps are withdrawn and giant wooden horses are yoked to the chariots, which are already so crowded with priests and police personnel that the deities are almost hidden. Thick ropes are tied and long queues of devotees and police form before the chariots. When the red flag is waved as a signal, with a loud thundering of “Haribol” the chariots of the deities are pulled along the prescribed route, according to ancient protocol — Balabhadra, then Subhadra and lastly Lord Jagannath. The decorated chariots appear as gigantic temples bobbing in a sea of humanity.

All along the way throngs of devotees touch the ropes in passing, others raise their arms in surrender, some throw flowers and some watch with folded hands. By sunset, the chariots have reached half way, poised at different places in the 21/2- km route of the procession. They will be pulled to their destination the next day. While the deities reside in the Gundicha Ghar for a week, specific rituals are observed, and now it is this temple that becomes the centre of attraction. The return journey of the Lord to his abode is observed on the ninth day and is again a grand occasion. The additional feature is that the chariots stop midway at the Mausi-ma Temple (maternal aunt’s house!), where a special offering of rice cakes is made to the deities. For the uninitiated, this entire medley of people, noise and overwhelming religiosity may seem slightly disconcerting, but it is indeed an experience to savour, at least once in one’s lifetime.

Sarojini Nayak loves to write about the vibrant culture of Orissa, its magnificent monuments and simple people.