Spend a week in Kenya to get that jaw-dropping, breath-holding, wide-eyed experience that the parks, lakes and reserves on the equator throw at you. 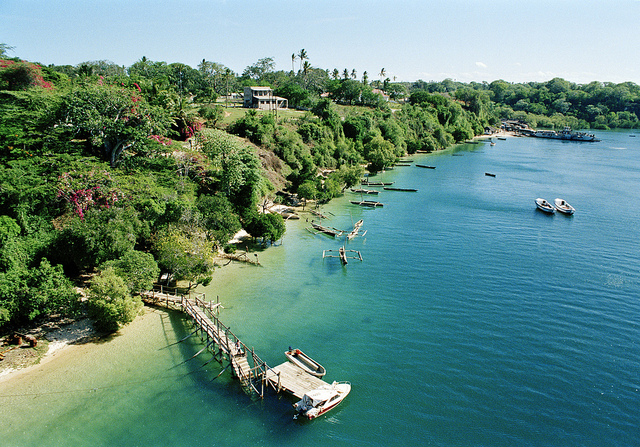 On the five-hour Mumbai-Nairobi flight, I was cluttering my itinerary with all the must-see, must-do in Nairobi, the Kenyan capital. I had barely stepped out of the airport breathing the crisp morning air when my meticulous Nairobi plan fell by the sidewalk. Blame it on a stork. A Marabou stork. On way to downtown, there seemed a Marabou perched on every acacia, their colossal nests balanced precariously on the thorny trees. I was so mesmerised by their stout bill, long legs, white plumage and pink throat sac that I forgot about my tryst with kings and princes who, at the turn of the century, checked into Norfolk Hotel for the big game safari; I even ignored Danish author Karen Blixen’s Museum (as Isak Dinesen wrote Out of Africa) who lived in Nairobi between 1914 and 1931.

I turned my itinerary ‘wild’ and on way fell orphan elephants. Tall giraffes. Rare bongos. Naughty baboons. Majestic lions. My first stop: An elephant orphanage. Set up in 1977 to honour the memory of famous naturalist David Leslie William Sheldrick, the Orphanage is home to orphan baby elephants and rhinoceroses whose mothers have either been killed by poachers or felled by disease. Not too far away in the Giraffe Centre, where Rothschild giraffes crane their long necks for a handful of peanut pellets that visitors are allowed to offer to the endangered giraffe sub-species. 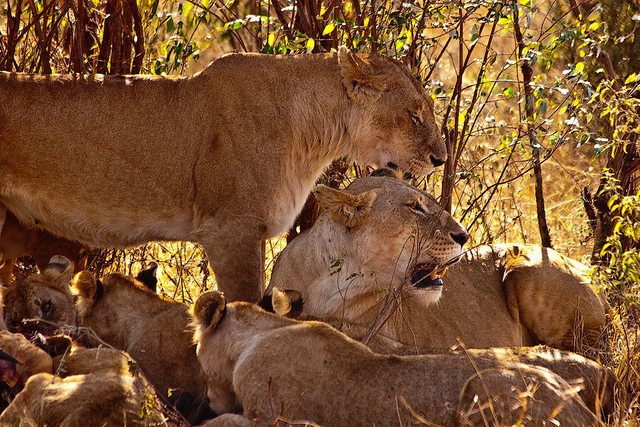 The musky breath of the giraffe is certainly not my favourite fragrance, but when the giraffe ambled up to deck and dangled its foot-long tongue on my hands, I conceded. A day in Nairobi is never complete without a visit to the Nairobi National Park, the only wildlife park in the world so close to the city (seven kilometres from city centre). In Kenya’s first national park, one can see lions, gazelles, rhinoceroses, and giraffes walking amidst the dense savannah with the city’s skyline as an attractive backdrop.

When the sweltering afternoon melded into a cool evening, the wildebeest walked back towards the waterhole, the park gates closed and I headed to Carnivore, Africa’s best game meat restaurant where men wearing tiger stripes serve barbecued meat on Masai spears.

A scoop of the Ugali (cornmeal porridge), traditional Kenyan breakfast, washed down with the famed French Mission Bourbon coffee and I was all set for a tryst with Lara Croft and Joy Adamson in Lake Naivasha, a freshwater lake situated at the highest elevation of the Rift Valley. Yes, Lara Croft, the bouncy daredevil who trooped to Hell’s Gate Gorge in search of Pandora’s Box in the 2003 film. And, Joy Adamson, the naturalist, artist, author who wrote the bestseller Born Free and lived on the shores of the lake that borrows its name from the Masai word Naiposha (literally, rough water). 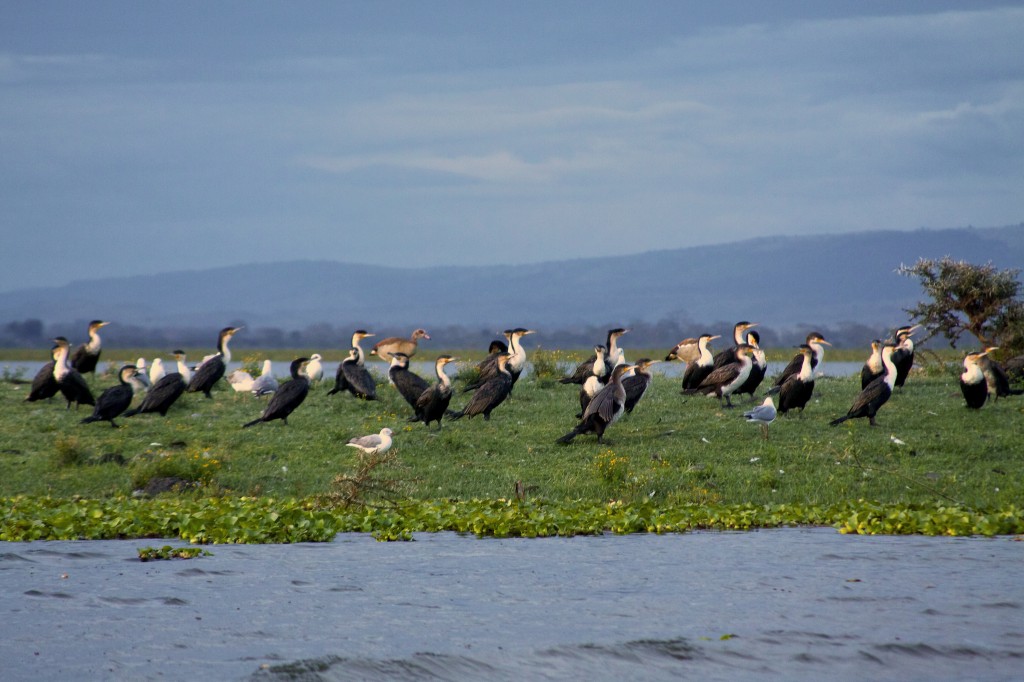 Once a landing place for flying boats on the Imperial Airways passenger and mail route between Southampton (the UK) and South Africa, today, Lake Naivasha, the 139-sq km lake is known for its sizeable bird and hippo population. At the last count, 400 different species of birds call Lake Naivasha their home. With binoculars and a bucket of sunscreen, I jumped into the blue boat. Even before the oars could cut through the water hyacinths and the swamp, I heard the long warbling song and the whiny alarm of the Superb Starling which got addled with the swizzling chirp of the long-tailed Widowbird.

A pod of neary 15 grunting hippos were wallowing in the warm water. As the boat cut through the lake’s belly, I counted 20 species of birds. No, not 400, but enough to fill a bird scrap book. After an hour-long boat ride, it was time to lace the shoes, pick Nordic sticks and head to Hell’s Gate Gorge, known as much for mountain climbing, trekking as for the rare Lammergeyer or Bearded Vulture. I hopped over fallen lops, jumped creeks, stood by a hot spring, huffed at steep inclines, dropped jaws at the red cliffs and panted each breath away at the gorge which is said to have been the inspiration for the main setting of The Lion King. Lake Naivasha is about an hour’s drive from Nairobi. Charter flights are also available from Nairobi.

Day three began with Stanley Gitau, driver/naturalist of Glory Safaris, setting the day’s agenda. Dusty place? I thought we were going to Lake Nakuru that was described by American naturalist Roger Tony Peterson as ‘the most fabulous bird spectacle on earth.’ Millions of Lesser Flamingos with pink beaks, thousands of pure white Great White Pelicans, the Defassa Waterbucks with white ‘bib’ under the throat and spiraled horns. I know they lord over Lake Nakuru. Would I not see them? “That is Lake Nakuru. Lake Nakuru is the Dusty Place,” Gitau clarified. In Masai language, Nakuru translates into Dust or Dusty Place. The road to Lake Nakuru is lush with the green of acacia and cypress, the savannah borrowing a dash of red from the red oat grass, and the rocky outcrops interspersed with poisonous candelabra trees.

Spread over 46,400 acres, Lake Nakuru, a fenced park, is framed by tall cliffs and yellow fever trees. Its famous residents: flamingos. The epithet: The world’s most fabulous bird spectacle. Lake Nakuru looks pink because of the flamingos. Not just a hatchful of birds, but millions of these leggy wading birds with slender neck and heavy bent bill. Flamingos are not all that I saw, though. Thousands of white pelicans were resting on the marsh, Marabou storks had dug their long beaks in search of fish, Blacksmith lapwings were wading through the shallow waters, their red eye glistening in the afternoon sun and the cormorants doing their signature half-jump in search of eel and fish. Amidst the shrubs walked a Rothschild giraffe, the rare five ‘horned’ giraffe that is found only in the wilds of Uganda and Kenya.

Lake Nakuru is a two-hour drive (140 km) from Nairobi. Private charter flights are available for the Park airstrip that is a 30-minute drive from the Sarova Lodge. Leave early to avoid the rush hour traffic in Nairobi.

There are only two accommodation facilities within the Lake Nakuru area: Lake Nakuru Lodge (www.lakenakurulodge.com) and Sarova Lion Hill Lodge (www.sarovahotels.com). For details about campsites, go to www.kws.org.

Are you quicksilver? Or, did you steal the cheetah’s hasty pace?’ Fatma Bashir of Kenyan Tourism Board stumped me with her question. Hopped over hemisphere? I was in Fairmont Mount Kenya Safari Club in Nanyuki and sure could not have hopped hemispheres in a blink. ‘Your left foot is in the northern hemisphere. Your right in southern.’ Bashir continued with the hemispherical palaver and I stood intrigued until I saw two marble slabs by the ZeBar, half the entry door is in northern hemisphere, the other half in southern. Ah! I was smack on the Equator, at 0 degree latitude; I was where the stars glittered. 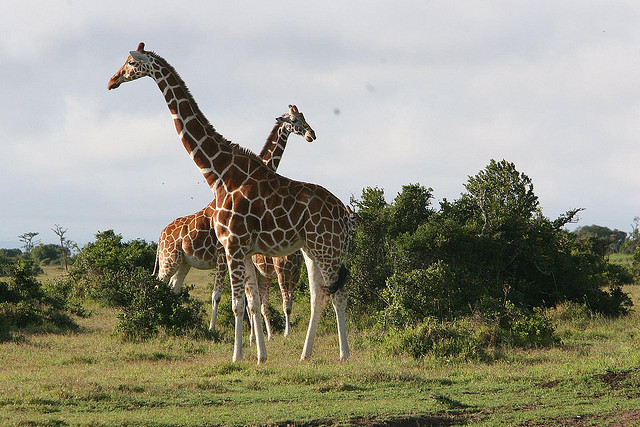 In Nanyuki, more than the monied, the mighty and the megastars, it was Patricia and Priscilla that had me enthralled. No, these are no leggy lasses; Patricia is a statuesque ostrich, Priscilla, a pygmy hippopotamus who have found shelter in Holden Animal Orphanage that abuts the Club. The Orphanage is always agog with the clamour of porcupines, crowned cranes, llamas from Peru, a panther and naughty Colobus monkeys eager to eat peanuts out of your hands. What had me whoop in joy were the endangered bongos, also known as the Mount Kenya antelope, that were last sighted in the wild in 1994. I could have gone for a bird walk, a horse safari, a walking forest safari, but that evening on the Equator I chose to be with the bongos. Nanyuki Airport is 110 km from the National Park.

Four days in Kenya and i had not seen a lion. Little did I know that the lions lay barely 17 km away in the 110,000-acre Ol Pejeta Conservancy that sits on the Laikipia plains. Not only is Ol Pejeta home to the Big Five (lion, elephant, buffalo, rhinoceros and leopard), it is the largest black rhino sanctuary in East Africa, the only chimpanzee orphanage in the country and has the highest area-to-animal density ratio of all Kenyan national parks.

As the jeep manoeuvred through savannahs, the snarl of the hyena and the whistle of the starlings melded with the squawks of raucous pelicans and drumming sound of the ostrich. The jeep rattled on dirt track but I stood on the seat for the glimpse of the mighty cat. With sundown, the mercury fell dangerously and I watched a lion pair mate. A moment any wildlife enthusiast could kill for.

At Sweetwaters, I did not have to crane my neck for a look at wildlife – antelopes sprinted fearlessly, buffaloes chewed lazily and an elephant walked with a swagger fit for a monarch. It seemed as if the angels had unwrapped a beautifully-illustrated jungle book and animals were walking out of the pages to complete the story. That night, the jungle safari did not end with the last hiss of the engine. It continued by the dinner table in the Rhino Restaurant that was home of the manager of this once-upon-a-time colonial farm. As if to live up to the name, a horned rhino moseyed up to the large waterhole and walked past a family of boisterous warthogs and zebras. Sweetwaters is a 40-minute drive from Nanyuki and can be covered in a half-day or full-day trip.

From the Kenyan Capital to the earth’s Equator, from Lammergeyer vultures to rare bongos, in Kenya, my itinerary was getting wilder by the day. And quite like any great journey, the best was reserved for the last. In Kenya, there cannot be a better finale than the Masai Mara, the game reserve which, technically, is the northern continuation of Tanzanian Serengeti National Park. My wild Kenya sojourn was to end with Masai Mara. As the tiny charter plane took off from Nanyuki airstrip for the 45-minute flight to Mara, I could see the Mara river meandering lazily through the grassy plains, circular Masai bomas (enclosures/huts) and hundreds of wildebeest (also known as gnu) which looked like tiny brown squiggles nearly 8,000 ft below. 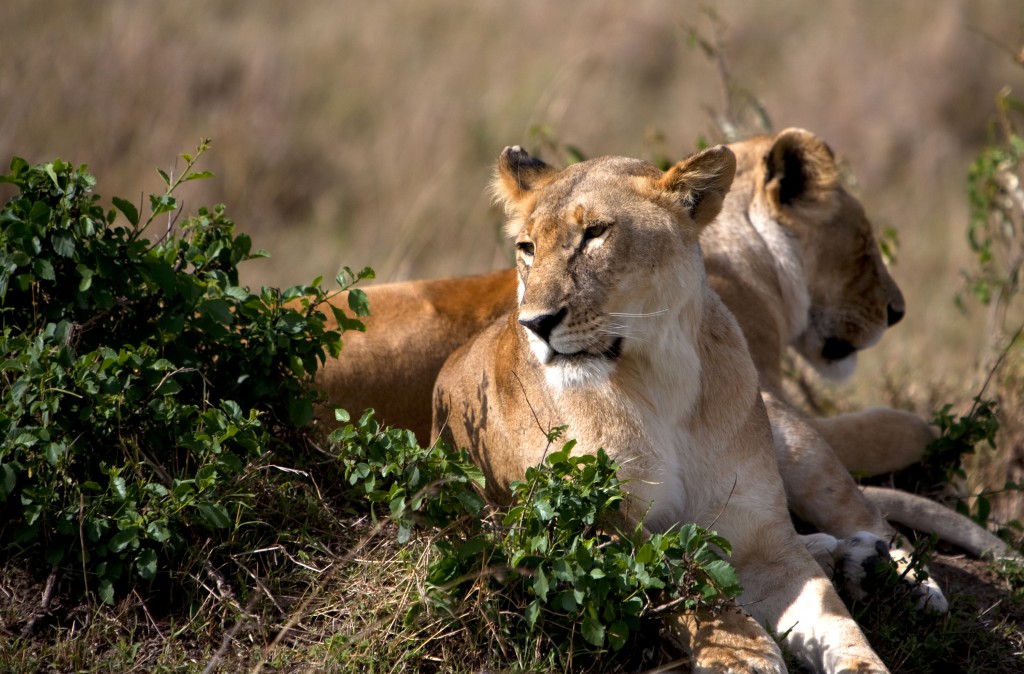 January is not the month for the Great Migration when thousands of wildebeest and zebras migrate between the Serengeti and Masai Mara in what is probably one of the largest migrations in the world. But, they say, Mara never disappoints. And it did not disappoint me either. Even before I could check into the hotel, a hyena with blazing red eyes blocked my way in the hotel’s driveway. That night, the buffaloes snorted by my door and rains pitter-pattered. Next morning, before the sun rose, I wrapped a Masai blanket and took off for the early morning game drive. ‘There’s a pride, there’s pride…’ I heard a scratchy voice on the radio.

The driver revved the engine and about a mile away a lioness and her four two-week old cubs were basking in the morning sun. That, however, was not the last of the big cats I saw in Mara. A cheetah was eating his kill under a tree, a lion was sauntering in search of his next meal, and six lionesses were on the prowl… Mara did not disappoint. The wild Kenya certainly did not. 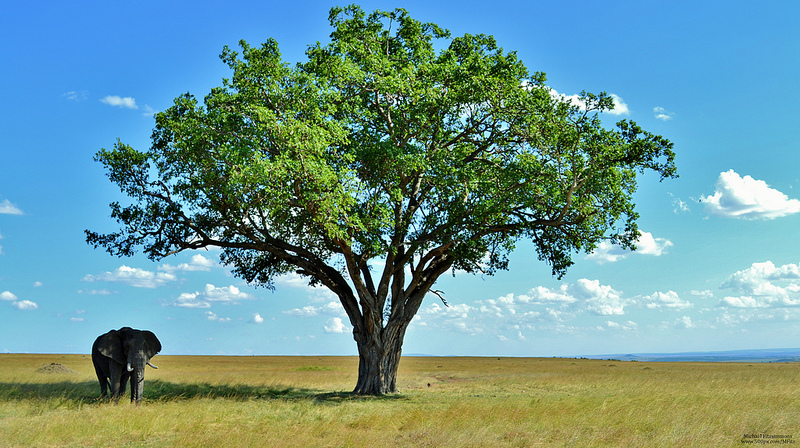 Where to Stay in Nairobi