Thanks to an early morning start from Bhubaneswar, we are at Barkul by mid-morning. This is the most preferred point to enter the Chilika Lagoon and, after a quick and refreshing cup of tea, we head towards the jetty. Our friendly boatman welcomes us, and volunteers to be our guide to explore the many mysteries of Chilika. As we leave the shore and its muddy waters, our eyes take in the breathtaking view of the lagoon — a large expanse of blue water, dotted by low undulating hills. There is the loud chirping of birds, the gentle drone of the motorboat and the splash of water, all combining to create a dreamy, magical effect. We prefer to veer away from noisy tourists heading towards the Kalijai Temple and instead make our way to Nalabana bird sanctuary in Chilika. Rows of stilts jutting out of the water make a homogenous boundary around the protected zone and we find many a solitary bird resting on them, as if taking a break from their flying and foraging. Our boatman helps us in identifying some common species of birds, and we also get to see a few exotic ones. 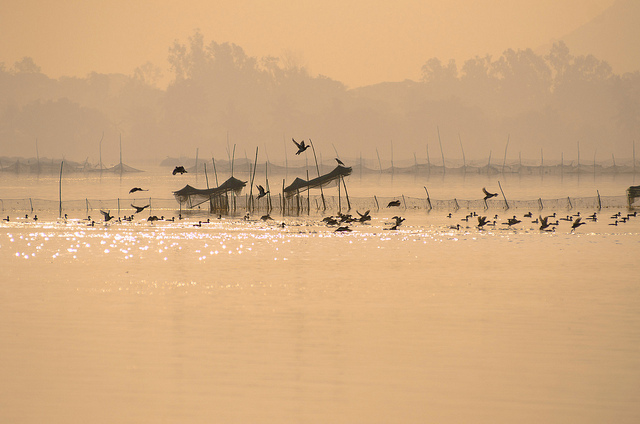 He tells us that he had spotted a few dolphins the week before, and we urge him to take us to the spot. But we are not that lucky. After waiting almost for half an hour, we give up our unsuccessful vigil and head towards other locations. There are a few island villages within the lake, and we see large boats ferrying people to and from islands. As our boatman informs us, it’s only the ferry that connects the islands to the outside world. After cruising around for another hour, we make our journey back to the shore, hoping to see much more scenic parts of the Chilika Lake from the Rambha side the next day.

The view of Chilika from Rambha is picturesque, and the islands with such quaint names as Breakfast and Honeymoon Islands are closer from this place. It seems as if all the tourists are congregating near Barkul. Rambha is mostly frequented by people looking for solitude, and a desire to be away from the madding crowd. As the manager at Panthanivas, the Orissa Tourism Development Corporation (OTDC) hotel, tells us ever so succinctly, honeymooners and retired couples prefer to stay at Rambha. On my visit there, it’s easy for me to see why that’s the case. They are pretty picnic spots, bursting with tales and history and beauty. 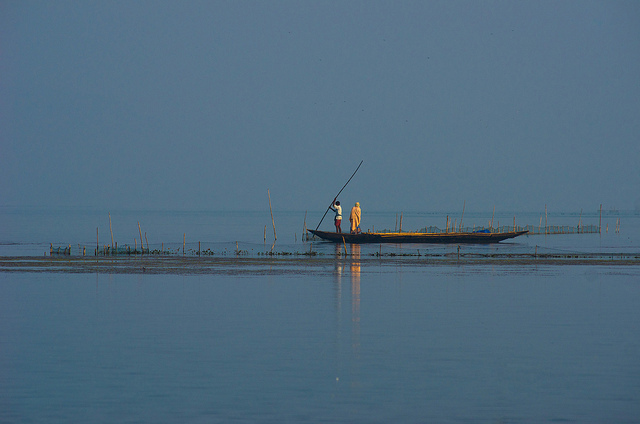 Visiting Chilika is not just about spotting dolphins or birds. Watching the sunrise or sunset while cruising on the blue waters, hearing the chirping of birds at daybreak, or while taking in the sight of fishing boats, with their sails billowing in the wind, one is filled with a sense of serenity that’s almost ethereal. And if you happen to hear the snatches of a boatman’s song that comes floating along with the soft breeze, the haunting melody will echo in your mind for long.

This estuarine lagoon, a wondrous creation of nature, has different connotations for different visitors. For ornithologists, it is an avian paradise. For conservationists, Chilika is a challenge — there’s a constant battle to protect the many species of fauna and flora that the lagoon houses from the adverse impacts of intensive fishing and mechanised boats. For world-weary travellers, the lagoon’s scenic beauty is an excellent remedy for frayed nerves. For over one lakh villagers living in the lake’s periphery, Chilika is a source of livelihood. 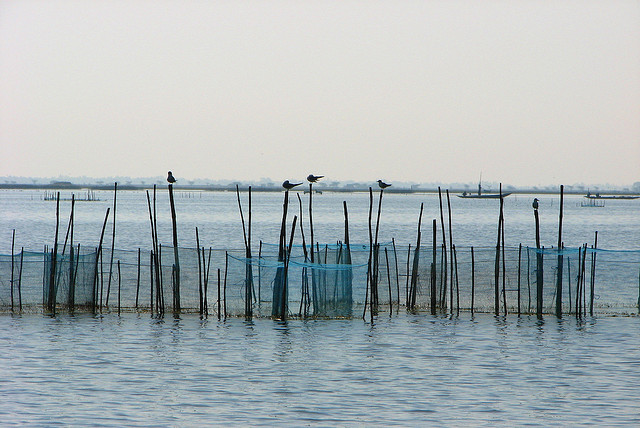 In ancient times, Chilika served as a gateway to distant lands and was a flourishing port. It is thought to have been a part of the Bay of Bengal. Traders sailed from Orissa (then known as Kalinga) to South-East Asian cities such as Java, Sumatra and other parts of Indonesia, as well as Sri Lanka. To mark that golden age of maritime traditions, a festival of sailing fancy paper boats, referred as ‘biota bandana’ is held on Kartik Purnima day. Many writers and poets have referred to Chilika in their writings. Interestingly, the lake can be viewed by those travelling by train on the Kolkata-Chennai route as the railway line runs parallel to the lagoon for a few kilometres.

Said to be the largest inland brackish water body in Asia, Chilika spreads over 1,165 sq km, and during the dry months, it shrinks to about 790 sq km. This varying water spread is affected by the flow of water from two major rivers, Daya and Bhargavi, and many small rivulets, which bring large quantities of fresh water during the long monsoon season. When the monsoon retreats, saline water from the Bay of Bengal fills up the lake. Both these water types — fresh water and saline water — bring in diverse aquatic life, including fish and plants. The unique ecosystem of Chilika can be attributed to this cyclic play of fresh and saline water. 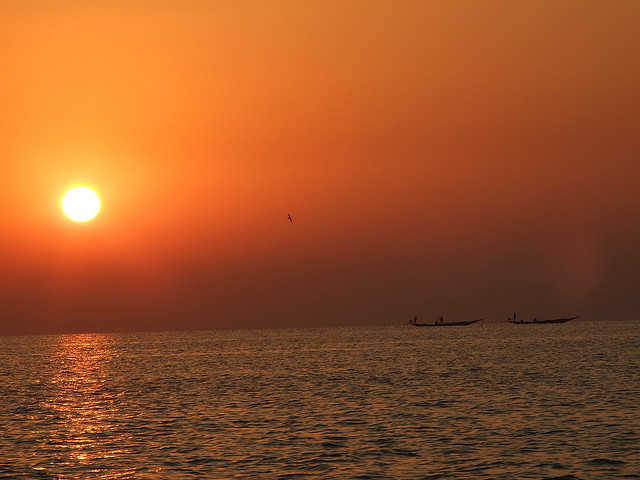 The lagoon is home to about 230 species of resident and migratory birds. About 160 species make it their winter home, flying for more than 12,000 km from as far as the Caspian Sea, Lake Baikal and parts of Russia and Central Asia. They cross the Himalayan ranges to make their way to warmer climates. Flamingoes from Iran are the rare winter beauties. A survey made by the Zoological Survey of India recorded over 800 species of fauna in and around the lagoon, including the endangered Irrawaddy dolphin and the Barkudia limbless skink (a species endemic to the island, first discovered in 1917; the next sighting of the animal came after 86 years in 2003). As a hotspot of biodiversity, Chilika is a Ramsar site and internationally acknowledged as a “wetland ecosystem with rich biodiversity”.

As Chilika’s ecosystem depends on the amount of fresh and saline water that flows into it, the destruction of the catchment areas of the rivers seriously affects the lake. The Chilika Development Authority works towards the lake’s conservation, among other things by desilting it (silting has shrunk the lake’s area, while pollution has resulted in the death of many species of fish). Besides, though dolphins are not hunted for meat, the presence of mechanised fish trawlers and tourist boats has depleted their numbers.

Location: The pear-shaped Chilika Lagoon is situated on the east coast of peninsular India, in the south-eastern part of the state, and is spread over Puri, Khurda and Ganjam districts. It is bordered by the Bay of Bengal in the east, the Mahanadi Delta in the north and the rocky hills of the Eastern Ghats in the west and south Distances 50 km SW of Puri, 110 km SW of Bhubaneswar

When to go: Chilika is open throughout the year, but the best time to visit is between October and February. This is the time when migratory birds can also be sighted here. Avoid the monsoon months of July and August as it rains heavily in these parts and venturing out on the lagoon may not only be inconvenient but also unsafe

Go there for; Birds, dolphins 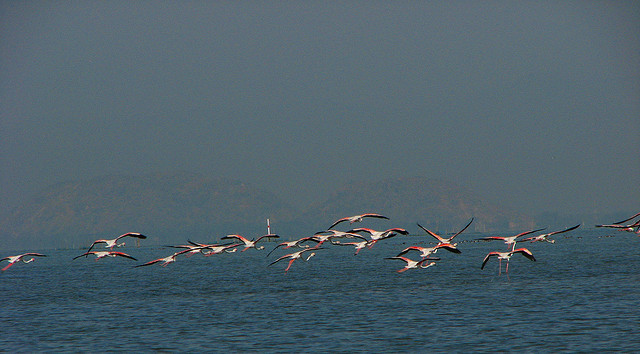