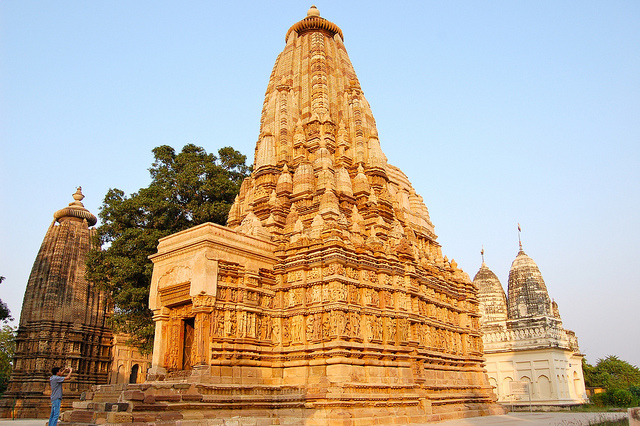 I had seen Khajuraho from the air before. On a shopping flight from Delhi to Varanasi several years ago, as the plane banked into a low swoop, I had spotted the temples, the tops of their spires blackened with age, rising like rocky outcrops from the rugged terrain. From the tiny airplane window, they seemed mysterious and alluring, filling my mind with images of stone-hewn goddesses and mortals in lascivious pursuit. 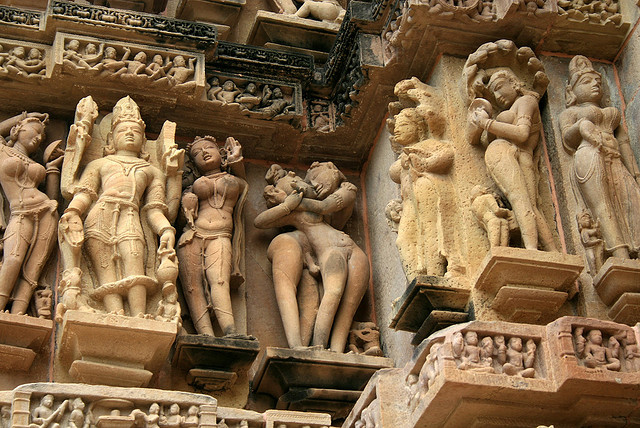 But on a recent visit to this temple town, I found that nothing — nothing — prepares you for the reality of Khajuraho. Everything that you may have read or heard about these ancient temple carvings pales in comparison to what your eyes behold. For, if ever there is a place that breathes sensuality, where every stone speaks, where every particle of ancient dust throbs with passion, then surely that place is here. That such a place should exist deep in the Hindu heartland of madhya bharatvarsh (middle India) is not a little surprising. But, then, that precisely is the mystique of India!

Spread over 21 sq km, the town of Khajuraho has little to recommend it except the temples that have been designated a UNESCO World Heritage Site. So, go prepared to look long and longingly at the temple carvings, and for the duration of the trip, just chill! Towns in central India, even big tourist magnets such as this one, have little to offer as add-ons to the ‘One Big Draw’. The choice of a good hotel or resort, therefore, becomes essential to complete the experience and to take some of the rough edges off travel and in negotiating the usual tourist traps that lie in wait to snare the unwary traveller. My stay at the Radisson, Khajuraho turned out to be a good choice for several reasons that I shall enumerate later.

First, the temples in Khajuraho themselves. In all, there are said to be 25 left of the original 85. Built from 9th to 12th century by a series of Chandela rulers, they are dedicated to Shiva, Vishnu and a pantheon of Jain deities. Visiting all 25 of them is neither advisable, nor necessary. Most visitors feel sated by having their fill of the two clusters: the Eastern and the Western group. I make my way to the eastern group first, as it is closer to my hotel. 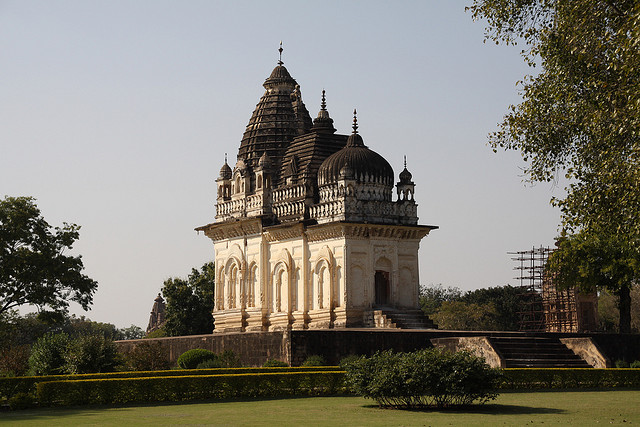 Situated beside a swift-flowing river, my first port of call is the Parsvanath temple. It is, I am cautioned by a local, no more than a trailer; ‘Picture abhi baqi hai mere dost!’I am told in true filmi style! Like all the other sculptured temples I will see over the course of the day, it is constructed of hard river sandstone, built atop a platform and accessed by a flight of steep steps. Celestial maidens (the alluring sura sundaris) drape its walls as do a thicket of motifs that will reappear before my eyes: horses, elephants, lotuses, flowering vines, apsaras and mortals in a variety of poses.

Sensual yes, even life-like and finely-etched, but there is no sign yet of the famous sexuality and concupiscence of these sculptures that one has heard so much about. From here, I make my way to the three Jain temples nearby. Dedicated to Adinath, the Jain Tirthankara, it has more yakshinis guarding its walls, and a more lavish profusion of embellished outer walls. I peep into the Ghantai Temple and gaze at a depiction of the 16 dreams of Mahavira’s mother. Images of nubile goddesses on winged garudas, a damsel bending to pluck a thorn from her feet, and another tying an anklet around her slender feet, stay with me as I hurry out; my appetite whetted, I want to see the real McCoy at the Western group. 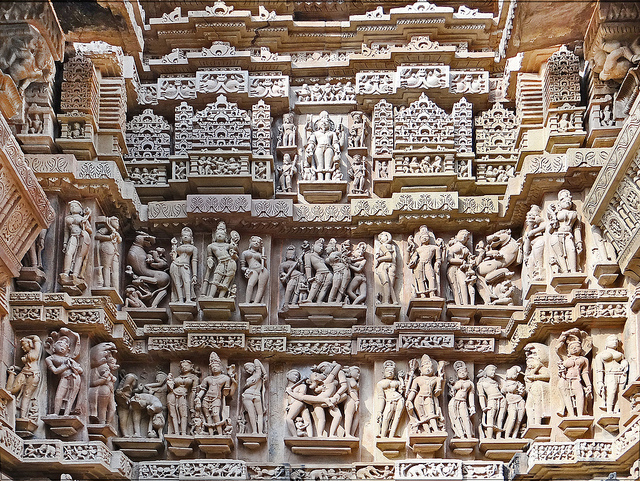 A short distance away, with two glimmering tanks on either side and the usual chaos of touts, trashy trinket-sellers and roadside eateries, stands the magnet that has drawn me so far. A mere ten-rupee ticket lets me loose into an enchanted wilderness; another Rs 60, and I am the proud owner of a set of earphones and an audio-guided tour. From amidst landscaped gardens, a small sea of temples of varying sizes and shapes rises before me, their undulating spires ascending in tiers reminding me instantly of the high peaks of the Himalayas, the true abode of the gods.

The large Lashmana, Kandariya Mahadev and Vishwanath temples stand beside the smaller Devi Jagdambi shrine and the Devi Mandap. After the first few, their names and historical details blur into meaningless tour guide patter as the sheer physicality of the frescoes stuns the visitors into silence. A Babel of tongues is all around me — Italian, French, Russian, Spanish, Chinese and many more that I cannot recognise. Groups of tourists cluster before the carvings, listening intently to their guides or frowning in concentration to hear the crackling audio tapes. Each time, I see a point of oblivion dawn on fellow visitors when the sounds fade out; in their place is an intense concentration on what lies before one’s disbelieving eyes. 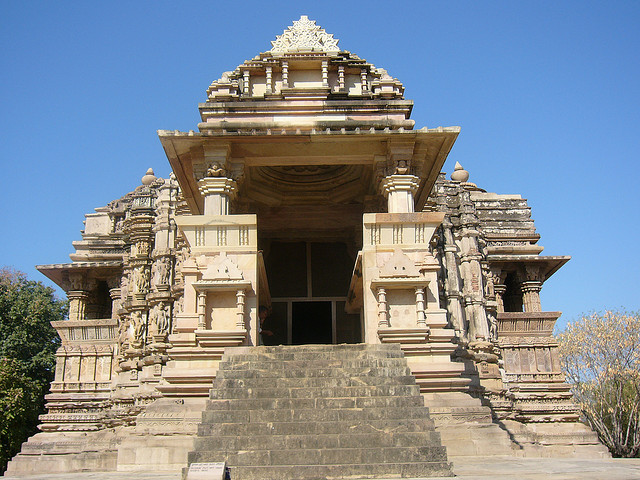 Caparisoned elephants, horseback riders, court scenes, musicians, dancers, children, courtiers, and mythical creatures that are half-human-half-beast are interspersed with human beings performing the most mindboggling sexual acrobatics. Why this profusion of libidinous activity on temple walls? What lies behind this sexual preoccupation? Could women have been so wasp-waisted and men so well-endowed? Could human hands have wrought these wondrous spectacles or, were they, as myth and legend tell us, crafted by divinely-inspired master craftsmen?

Light and Sound Show in Khajuraho

I get answers to some of these questions when I come back to the temple precinct for a light and sound show in Khajuraho. Organised by MP Tourism, this turns out to be a singularly memorable experience. My nose red with cold, I sit on a plastic chair on dew encrusted grass under a star-spangled sky, and find myself mesmerised.

With the sound of a chisel striking a stone, the narrator draws you into the story of Khajuraho: how it got its name from the tall khajur (date palms) trees that ringed the tank, and how the nayika is central to a temple for just as a house is barren without a wife so too a temple without female beauty shall not bear fruit. The secular and the sacred merge just as science and religion, architecture and sculpture come together in the making of these temples. 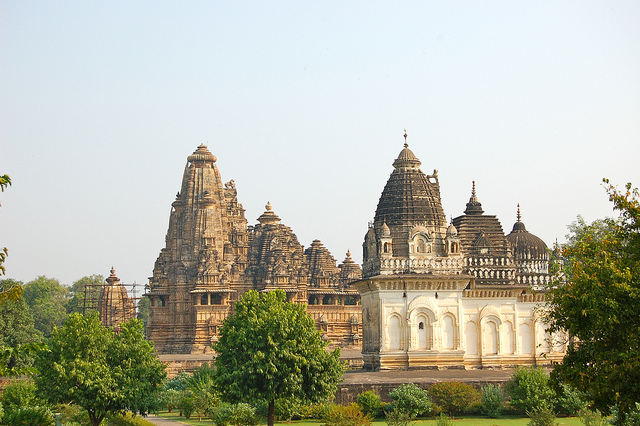 Concentration on the essence of the deity is vital for concentration alone is the tool of the sculpture. Neti, neti, neti… not this, not this, not this… By a rigorous process of elimination, the sculptor removes all non-essentials and gives us a sculpture that is spare and shorn of inessentials. Balance and precision, harmony and proportion are vital as enormous blocks of stone are fitted like pieces of a giant jigsaw puzzle.

The sound of temple bells evoke images of a sanctum sanctorum lit by oil lamps and heavy with the scent of incense and fresh flowers as ancient verses reverberate in the still night. I listen entranced as the cold seeps through my winter clothes but the beauty of the narrator’s words and the spectacle that unfolds leaves me with a warm glow.

The next day, I make the most of the half day I have before catching my late afternoon flight back to Delhi. The airy, light and cheerful interiors of the Radisson are designed to pamper and delight. A dip in the pool or a nap on the brightly-striped deck chairs; an energetic game of badminton or a soothing Kerala massage; a drink on the manicured lawns or a walk around the seven-acre property — you can take your pick.

Having sampled a lightly-grilled, freshly-caught sindha, a nearly boneless firm-fleshed river fish, the previous day, I allow the chef to tantalise my tastebuds with a choice of buffet and a la carte dishes. But first, he takes me on a quick tour of his pride and joy: a kitchen garden bursting with winter greens, seasonal fruits and exotic herbs. He shows me rows of neatly-planted pok choy, turnips, carrots, brinjals, cherry tomatoes, broccoli, cabbage, and beds of basil, thyme, chilly, dill, lettuces, and much else.

He points to a tree laden with plump, golden orbs; these are the Indian gooseberry (amla) that he turns into a piquant pickle. He offers me a reddish-purple Chinese guava, its tart sweetness unlike anything I have tasted before, and a handful of glistening pale-skinned ber, the new super-food said to be packed with Vitamin C.

He returns to his kitchen and produces a marvelously flavoursome minestrone soup, full-bodied and fragrant with tender baby carrots, still smelling of warm earth, and home-grown basil leaves. With it, he sends up an expertly done chicken stroganoff and a side dish of buttered peas and greens spiced with garlic. On winter nights, I am told, he sets up a barbecue on the patio outside and produces sizzling kebabs and tandoori platters. Apart from this place, there are a number of other restaurants in Khajuraho where you can try the local specialties and the usual multicuisine fare.

Winter is a good time to visit central India: the weather is balmy with just a nip in the air, the days pleasant and the nights chilly enough to make candle-light dinners and coal braziers seem like a good idea. The fields are green with a variety of winter seasonals — wheat, pulses, vegetables, cereals, all grow in great abundance in these parts.

The bright yellow of mustard in full bloom creates a pretty patchwork-quilt pattern with the green of ripening wheat. The dips and hollows between the densely-forested hills and grasslands are filled with monsoon rains; crystal clear water laps in the plentitude of tanks and lakes. The many big and small rivers and rivulets gurgle and tumble over ancient rocks, causing small waterfalls along their path. Plump river fish are waiting to be caught, and trees laden with guavas and berries border the lush fields.

The energetic would do well to stir beyond the sanitised compound of their hotels and take in something of this spectacular countryside. Most hotels, including the Radisson, are only too glad to organise short trips: to view the waterfall at Raneh  or look for elusive crocodiles at the Ghariyal Sanctuary. Another pleasant way to spend a winter afternoon is to go on elephant back to the riverside and watch the sun go down. 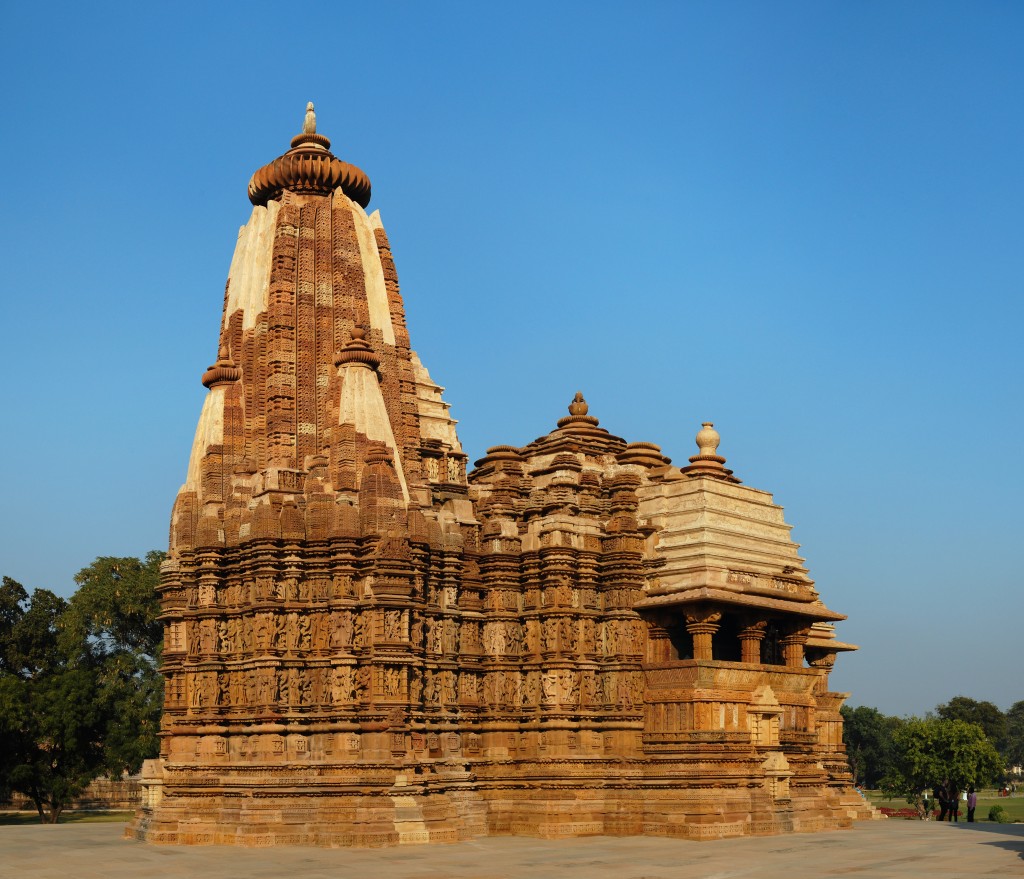 Those wishing to go further afield can plan an itinerary that includes trips to other neighbouring destinations. Orchha, lying off the Jhansi-Khajuraho road, has plenty to offer history buffs. Ornate chhatris (cenotaphs or memorials to dead Bundela ancestors) are interspersed with palaces, temples and forts; resorts and palaces offer stunning views of the Betwa river and the very air is redolent with tales of love and valour. Kalinjar, situated 130 km away by road, offers a glimpse into the martial past of the Chandela rulers who ruled from their well-guarded citadel in the heart of India.

By air: Khajuraho is well connected by flights from Delhi, Agra and Varanasi.

By rail: Jhansi is the closest station while coming from the north. Satna is more suitable if coming from the south or from Varanasi. The Bhopal Shatabdi takes you to Jhansi (from Delhi). From here, get a bus to Khajuraho, with a stopover at Orchha.