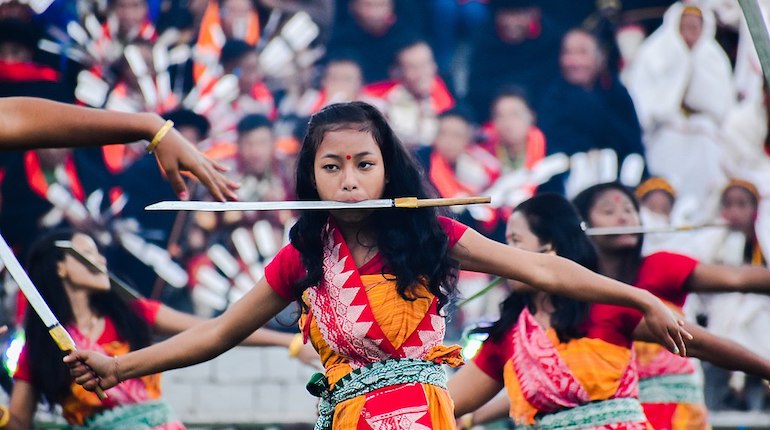 For the first time since its inception in 2000, Nagaland’s famous Hornbill Festival will be held virtually. The cultural extravaganza usually unfolds at the Kisama Heritage Village outside Kohima, the state capital. This time, however, viewers will be able to watch the celebrations on three news channels.

The festival takes place every year between December 1 (Nagaland’s Statehood Day) and 10 every year. The first broadcast was streamed yesterday, and you can catch the upcoming live streams starting tomorrow on these channels:

“The festival is a celebration of the Naga tribal way of life…that showcases the energy and vibrancy of Naga youth,” said Neiphiu Rio, the Chief Minister of Nagaland in a press release. “The pandemic has created new normals, and accordingly Nagaland is rewriting the tourism script by aligning the industry to the changed dynamics.”

Dubbed ‘the Festival of Festivals’, the event draws in thousands of visitors for its unique display of tribal music, dance, and sports such as wrestling and archery. It also gives villagers in far-off areas a chance to meet and learn from their kinsmen across the state.

Tourists can normally buy traditional handicrafts like sculptures, paintings and carved wood objects—a beautiful souvenir haul that will be missed dearly this year. The Northeast’s botanical diversity also gets showcased in food and herbal medicine stalls, decorations, and flower shows.

The Miss Nagaland beauty contest and a musical concert are modern additions, with the latter featuring international and local rock bands.

Inspired by the festival’s recognition and success in bringing the Naga identity to a global stage, Tripura also hosted its first hornbill festival this year in February. Come 2021, we hope both these festivals can make it back to their original locations safe and sound!