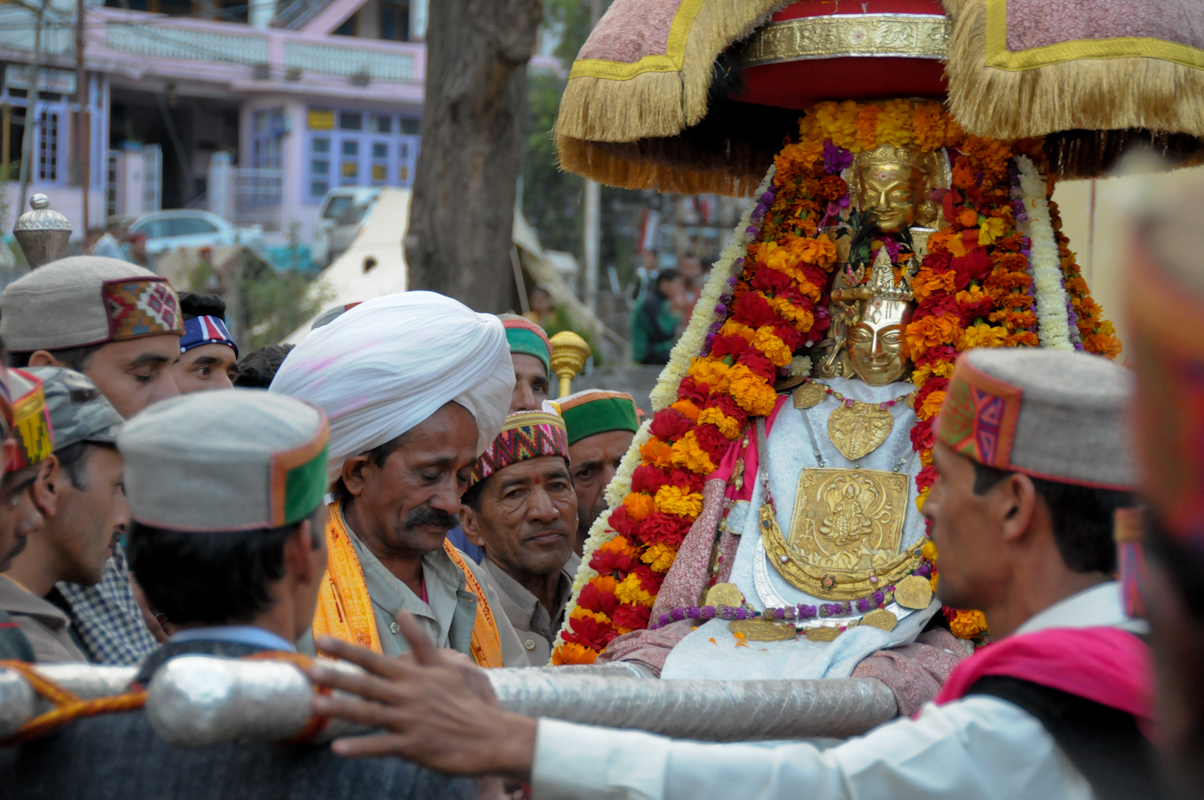 Imagine a Dussehra where nobody tries to prove “my Ravan is bigger than yours”; there’s no staging of the Ramlila; where children do not play with swords, maces, bows and arrows, and the victory of good over evil does not translate into noise and smoke. Then, go and see it for yourself in Kullu. The Kullu Dussehra is deservedly famous, but few know that it is nothing like the festival most of us celebrate. For one, it does not end on Vijayadashami, but only starts on that day, to then go on for a week. It is certainly connected to the legend of Lord Ram’s victory over Ravan, but that event is not central to it. Rather, it is local lore that has shaped the celebration of Dussehra in the Kullu Valley for the last few centuries. The story goes that a Vaishnav saint, Krishnadas, advised Raja Jagat Singh (1637-62) of Kullu to somehow obtain the idols of Lord Ram and Sita, which were enshrined in Ayodhya’s Tretanath Temple, if he wished to be cured of leprosy.

The Raja sent off Pandit Damodardas Gosain on this mission, and after waiting for a year the Pandit was able to steal the idols. The idols were first installed at Manikaran, and the Raja dutifully served them and drank their charnamrit, whereupon he was cured. Soon after this, he placed the idols on his throne and declared himself a servant of Lord Ram. In the year 1660, he built the Raghunathji Temple in Sultanpur (Kullu), and the idols came to reside there. The same year the gram devtas or village deities of Kullu (see ‘The devtas of Kullu Valley’ on page 282), numbering altogether 365, also assembled to pay obeisance to Lord Ram on the occasion of Dussehra. And ever since then, the Dussehra at Kullu has had its distinct character.

Most tourists associate the Kullu Dussehra with the rath yatra in the Dhalpur Maidan on the first day of the celebrations. It is no doubt the most exciting event of the week but not the only one worth witnessing. On Ram Navami, a day before Dussehra, Kullu town comes alive with the sounds of drums and horns announcing the arrival of the devtas. Colourful processions enter the town from all sides and head for Dhalpur Maidan, where the various devtas have their pre-assigned camps. Ram Navami’s most important event takes place at the Raghunathji Temple in Sultanpur. In the evening, the idols of Lord Ram and Sita are taken out of the sanctum and placed in a swing for devotees to worship them. Legend has it that these idols are the very same that Lord Ram used during his Ashwamedh Yagna. They are tiny because they symbolise the spirit, and they are always kept behind a curtain because the spirit is invisible. So this evening is your only chance to see the idols. 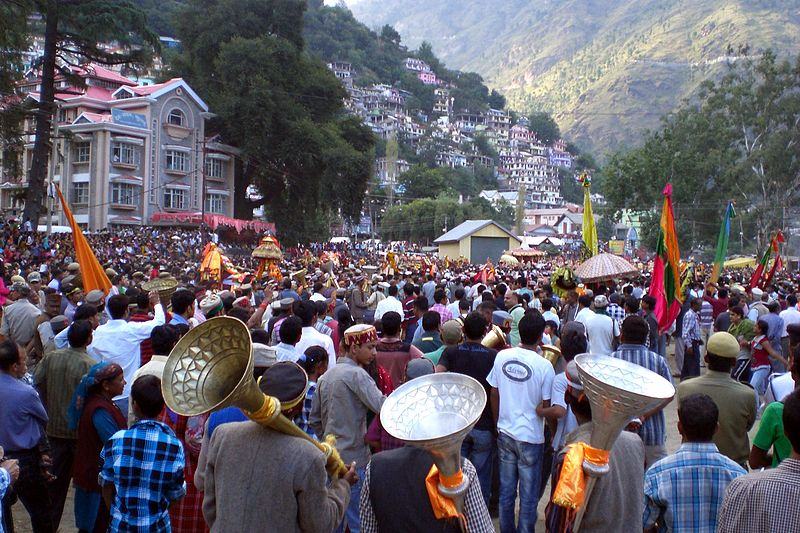 Dussehra in Kullu (Photo by Kondephy)

Dussehra day begins with the devtas making a beeline for the Raghunathji Temple. The temple is their first stop but they spend more time at the Rupi Palace nearby, where they are greeted by members of the royal family. The reception at the palace goes on for hours and it is very enjoyable. Nobody stops tourists from coming inside the palace courtyard. In the afternoon, the idols of Lord Ram and Sita are carried in a palanquin to Dhalpur Maidan for the rath yatra. Not only the ground but also the buildings around it are covered with people eager to catch a glimpse of the event. But though the wooden chariot seems ready to move any minute, the rituals and the unruly gram devtas ensure that the yatra does not begin till almost 5 pm. But when it does, it’s over in the twinkling of an eye. The police cordon falls apart as the devtas make a mad dash after the chariot, and suddenly the quiet ground becomes a sea of bobbing heads. It’s an adrenaline moment, which explains why it has become the abiding image of the Kullu Dussehra. For the next four days, there isn’t much to see, unless you care for the cultural events organised every evening in the fair ground.

The fair is mainly an opportunity for the villagers to buy whatever they need, from bangles to automobiles, but it’s unlikely to enthuse big city dwellers. The sixth day is again important because that’s when the gram devtas have their annual meeting with Lord Ram. There’s also some good pahari music for the soul. But the last day is again exciting as the chariot is now drawn to the banks of the Beas, where dry bushes are set ablaze to signify the burning of Ravan’s Lanka. Then the chariot is again brought back to Dhalpur, and Lord Ram and Sita taken back to their temple in Sultanpur. This ends the week-long festivities. The devtas disperse and the villagers follow in their wake.

The famous Kullu shawl has its origins across the Sutlej River, in the erstwhile Bushehr state (modern day Shimla and Kinnaur). Since Kullu lay on a number of trading routes, many expert weavers from Bushehr settled down in the kingdom. The Valley is today home to some 20,000 weavers; at first sight Kullu seems to be a sprawling shawl emporium. National Highway 21 is lined with shops selling shawls for many miles. A lot of these are tourist traps, fitted out with a loom or two behind glitzy facades: many of the ‘Kullu shawls’ sold in Kullu town are counterfeits made of viscose yarn in Amritsar or Ludhiana. If you want a cheap, utilitarian shawl, even if a counterfeit, try the shops in Dhalpur Bazaar. This is where the locals shop, so the prices are honest.

A machine-made, synthetic fibre shawl should cost you less than INR 150, while pure wool handmade shawls start around INR 350. For richer shawls, you could try the large emporia like Trishla Shawls (at Ramshila, 1 km out of Kullu town) and Bhuttico, the most respected name in Kullu shawls. This cooperative now produces between 80,000 and 1,00,000 shawls every year, ecofriendly and made using azo-free dyes. Bhuttico has outlets at Bhutti Colony (7 km in the direction of Mandi), Akhara Bazaar and Sarvari Bazaar. Their shawls are priced between INR 300 and 10,000.

Abhilash Gaur has seen a lot of Himachal but is yet too tire of a state.