Time: 2-3 days
Level: Easy
Ideal Season: All year except Dec-Jan
Location: In the Beas and Sutlej valleys of Mandi District

Janjheli is a picturesque valley with forested mountainsides sloping down from ridgelines. It’s dotted with pretty flowerbedecked meadows. The British wanted to develop the area as a hill retreat but the Raja of Mandi did not approve of their plan. The abode of Goddess Shikari stands atop the highest point in the area. Legends aver that the Pandavas built the temple while wandering in the Himalayas during their exile. Arjun apparently saw a deer in the forest below the ridge but, surprisingly, failed in his attempt to bring down the animal. Realising that the deer must be a manifestation of some divine power, the brothers prayed to the divine power to reveal itself. Navdurga appeared before them and asked the brothers to install her at an appropriate place. The Pandavas then built a temple for the goddess on the peak, and she came to be known as Shikari Devi, the Goddess of the Hunt. 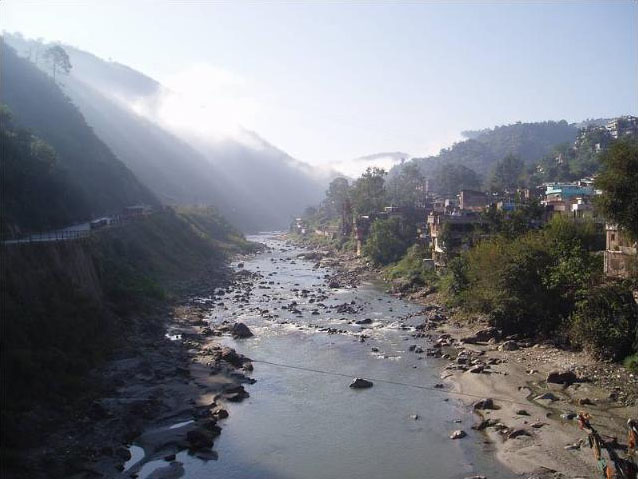 River Beas flowing through the city of Mandi (photo by Gerrynobody)

The temple is roofless. According to local lore, the goddess does not permit construction of a roof and all attempts in this direction have failed given the strong winds that buffet the peak. Animal sacrifice is practised at the temple. During the navratras, a fair is held here, which attracts a large number of devotees from the surrounding valleys. This easy trek can be completed at a leisurely pace in three to four hours. The walk is shaded and is mostly on a jeepable road. From the top, at Shikari Devi (2,950m), several options are available. One can come back by the same route or go down south-west to Devidhad. Or descend south to Chindi/ Bakhrot to reach Karsog Valley from where one can board a bus to Mandi or Shimla. It is also possible to trek to Kamru Nag from Shikari Devi and then trek down to Rohanda on the Karsog-Mandi Road. Alternatively, you can descend to Janjheli (1,900m) from Kamru Nag. All these are one-day treks.

There are two trails from Janjheli that lead to the temple. Both pass through a thick forest of blue pine and oak.

This is the better option, though slightly longer. It follows the jeep road almost all the way to the temple. The gradient of the ascent is less taxing and there are several shortcuts, which can reduce the distance. The road heads south through the mixed forest of oak and pine that serves as a habitat for numerous wild animals, including the black bear. The road stops about a kilometre short of the temple, from where a path climbs steeply south to a small ridge. At the ridge, the path turns right and levels out to reach a sarai just below the temple. The roofless temple commands a 360-degree view. Kullu District is to the east and north while Mandi and Shimla districts spread out in the other two directions with the Sutlej Valley dividing the two districts in the south. The view from the top is stunning. Range upon range of hills appear to roll away endlessly into the distant skyline. On a clear morning, the high snow-covered Himalayan ranges on the Kullu side seem close at hand. A 15-min descent leads to the 2-room Trekkers’ Hut (for bookings contact DFO Kullu, Tel: +91-1902-222510), visible from the top. It is reasonably furnished with beds, basic furniture and a kitchen stocked with fuel wood.

This trek is via the Budha Kedar Cave. It involves a steep climb and is tiring. The trail takes off south-west from Janjheli, passes through several small villages and enters a forest with some fine chir pine, oak and blue pine trees. It then climbs south leading to the Budha Kedar Cave, with a cave temple alongside a stream. Beyond the cave the climb continues through a picturesque landscape before climbing steeply to a ridge, where there are a few Gujjar kothas. Here the trail turns left and ascends to the temple sarai. This path can also be used to descend from the temple. An early start in the morning makes the journey easy and enjoyable. The forest is rich in both flora and fauna including bears, therefore one should not travel after dark. 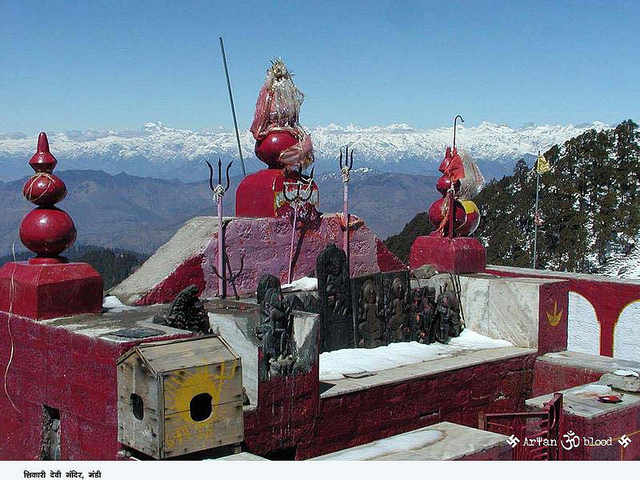 To return to Janjheli either follow one of the two options described above in reverse. Or choose from the ones described below.

Descend southwards to Bakhrot on the Karsog-Mandi Road. The steep trail is well defined and passes through a beautiful valley with some ancient temples. Karsog is a sub-divisional headquarters with bus services to both the district headquarters at Mandi and the state capital Shimla.

From Shikari Peak it is also possible to trek the 10 km to Kamru Nag (2,926m) in 3-4 hrs on a defined trail that traverses many small ridges but does not involve many steep ascents and descents. The thickly forested terrain makes this a fine walk heading east from the temple past a ridge-top helipad. From Kamru Nag there is the option of descending to Janjheli (10 km/ 4 hrs) or Rohanda (7 km/ 2-3 hrs). Rohanda is on the Karsog-Mandi Road. Kamru Nag is a powerful local deity and the temple is on the edge of a lake. Every year, on 14th and 15th June, a fair is held here, which is attended by thousands of people. There is a tradition that the offerings (often gold/ silver ornaments and coins) are immersed in the lake located on the level ridge top. You can camp here in Kamru Nag if you want, and proceed to Janjheli or Rohanda the following day.

Just past the ridge-top helipad near the Trekkers’ Hut, a path descends steeply into another southern valley sloping away from the flanks of the Shikari Devi Range, to the Forest Rest House at Devidhad (10 km/ 3 hrs). For bookings contact DFO Wildlife, Kullu on Tel: +91-1902-222276. Devidhad is connected to Chail Chowk by the Karsog-Mandi Road.

Bhulah, 10 km on the motor road from Janjheli (or a 7-km trek) is a set of breathtakingly beautiful meadows. The metalled road passes through the villages of Kataru (11/2 km) and reaches Sangalwara and Kyoli Nal villages (4 km). These are located near the Bakhali Khad. From here a dirt road heads to Bhulah. Carry tents and necessary provisions if you intend camping out. 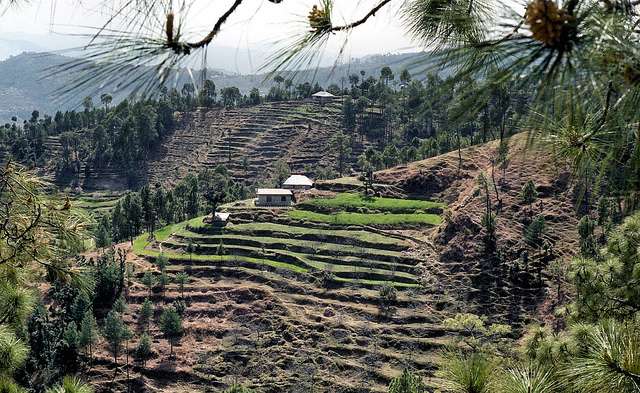 Village on the way (photo by Jussi-Paavo)

Budha Kedar, a short trek from Janjheli (2-3 hrs away to the south), is steeped in myth and lore. It is said that the imprints of Bhima’s knees were left on a giant boulder when he knelt to stop an escaping bull. The bull escaped, but its tail got caught in a cave nearby. The ‘tail’ can still be seen in this cave, whereas the ‘head’ of the bull can be seen at Kedarnath in Uttarakhand, with the body trapped in the earth between these two places.

Tungasi Dhar (3,600m) was chosen by one of the Rajas of Mandi for an observation tower to keep watch over Kullu. Though the highest point in the region, this strategic post gradually lost relevance. It is said that condemned prisoners were once pushed down from the cliff and their shrieks could be heard till Janjheli. This practice stopped when the British took over the hills. Approach the fort through Janjheli Village and climb a steep 3 hrs (7 km) to the east. From here, there is also a trekking route to Garagushaini and then to Banjar. 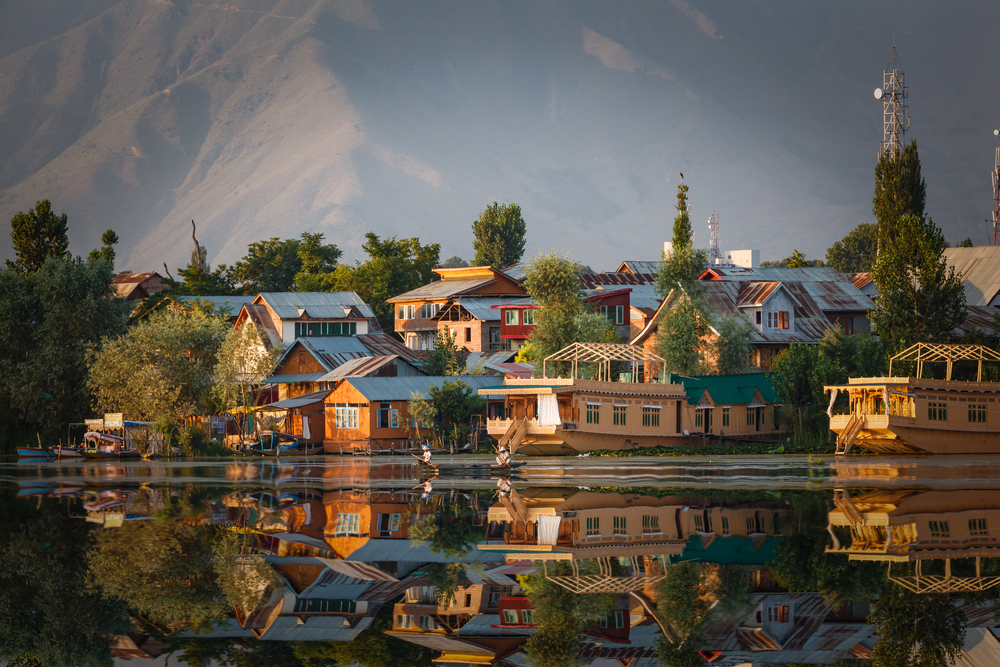