The wars are over. Bhainsrorgarh Fort is ready for love. Perhaps the only thing one could still possibly ‘kill’ for would be the heart-stopping views from the romantic jharokhas of its river-facing suites and the enchanting terrace.

Panoramic view of the Bhainsrorgarh Fort

Standing tall and proud on a 200- foot rocky slate ridge, against the stunning backdrop of big, open skies, lowlying Aravalli Hills and the sinuous Chambal and Brahmini rivers, this sprawling fortified outpost of the erstwhile kingdom of Mewar actually hides a soft soul in its still rugged exterior.

The royals of Bhainsrorgarh have set aside their weapons generations ago to greet you warmly and ceremoniously into their palace-home, personally taking care of your comforts and cooked meals from the royal kitchen. Garlanded by the lady of the house like a royal guest, I’m ushered into the Mewar Suite on the second floor — one of the palace’s five spacious suites on offer to guests. The bathroom alone could have accommodated a couple quite comfortably, the lounge and dining area seem to stretch for miles, but the bedroom is snug and cosy with a four-poster bed under a high-ceiling fresco dome and jharokhas. The décor is definitely princely, maintaining original architectural features like stained glass windows, arches and alcoves, glass lamps, crystal chandeliers… But not luxuriously opulent — after all this is a fort.

Secrets of the Night

After freshening up, I’m invited to the terrace — a table has been laid out under a jharokha, the most addictively romantic spot in the palace. My host, Hemendra Singh, son of the present Rawat, offers me a much welcome drink and shares stories about the Mewar empire, his ancestors and the splendour of the views from where we sit. 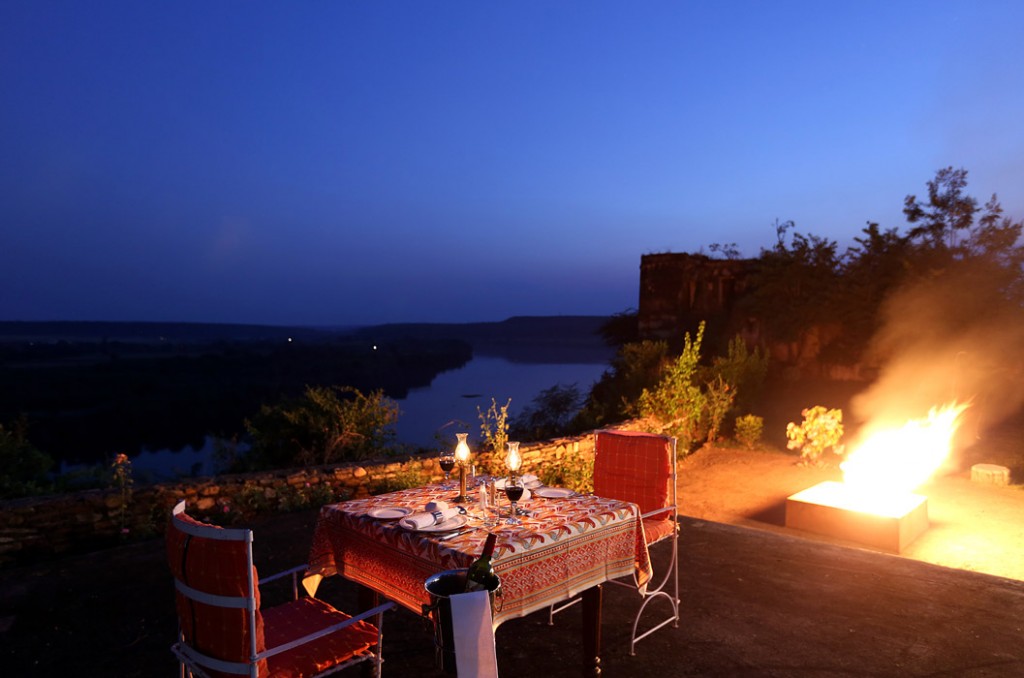 I peer through the curtain of darkness, feeling only the openness of the skies and the wind in my hair, still unaware of the hidden magic below, when a dramatic streak of lightning lights up the sky. Just for a flash, like a teaser, glistening water and glowing fields are revealed and then, darkness descends again. Nothing is tame around here. The thunder thunders, then some more lightning and then the rich aroma of an appetising soup wafts up and takes all my attention. Magically, a feast has been spread before us — makki ki roti, dal, several fresh vegetable dishes and, of course, the legendary lal maas — this recipe is a traditional palace secret, says my host and I completely believe him, sinking into its wondrous flavours. After all the wars and the politics, the nobility clearly had a good life. I speak with the authority of experience since I feel like nobility right now. I’m asked to guess what the yummy dessert’s been made of. I prefer to exercise the taste-buds instead of the grey cells. Turns out it’s green wheat from the Bhainsrorgarh fields, available for only about 20 days in a year. In fact, every morsel consumed has been organically home-grown and prepared under the supervision of the lady of the house. Mewari hospitality at its best.

Normally not a morning person, I’m anxious to greet this one. The first look from my jharokha has my jaw dropping. Wispy rain kisses my face as I gaze into the silky clear waters of the Chambal below for the first time. Silverpink clouds hover above the undulating Aravallis and misty fields of green stretch out in between. Notes of Gaud Malhar drift into my consciousness as the morning light and the crisp breeze refresh every soul. Now I understand why all rainy folk songs yearn for the beloved; moments like this are made for lovers to be together. After all, rain in Rajasthan is rare this time of the year.

Slowly, the morning asserts itself. The roosters crow, a bunch of bright green parrots croon along, flitting from branch to branch and the temple bell sounds as the priest performs puja in the old stone palace temple. The ancient fort wakes up.

The freshly brewed coffee is perfect, which is a rare compliment from me, the coffee-noisseur. I open the little stained glass windows in the dining area of my suite, letting in a pleasant breeze and gorgeous views of the old stone granary basking above the river and the splashing orange and reds of bougainvillea shrouding the carved temple. Breakfast is fresh and wholesome — cereals, milk, a bread basket, seasonal fruits, eggs done my style, along with a Rajasthani special bread, reliya. Thus, happy and energised, I’m ready to soak in the day!

It has nothing to do with buffaloes. Bhainsrorgarh draws its origin from Bhainsa Shah, a baniya trader who along with his partner, Rora Banjara, created the first settlement in this area called ‘Bhainsror’, which was later fortified and became Bhainsrorgarh. The fort was built by Rawat Lal Singh who was granted this jagir by Maharana Jagat Singh II of Mewar, Udaipur, in 1741. The chief of Bhainsrorgarh was amongst the 16 first class nobles of Mewar. The ruler was conferred the title of ‘Rawat’ by the Maharana of Mewar. The jagir of Bhainsrorgarh holds great importance to the Chundawat clan of Sisodia Rajputs, as it was granted to crown prince Rao Chunda after he renounced the throne of Mewar to his to-be-born stepbrother in the 14th century. Rawat Shiv Charan Singh, who is the present owner of Bhainsrorgarh Fort, is the ninth in the line of succession since Rawat Lal Singh.

There’s a lot of history and places to explore in and around Bhainsrorgarh, points out my host, but most couples prefer to laze around in the precincts of the fort itself. Had I visited with my partner, I might have done the same. Why would you want to venture out when you can feast on the glorious views from the many nooks and crannies in the fort itself, or carry a picnic lunch down to a private spot by the river, or woo your lady on a boat at sundown, or simply linger languorously on the terrace, fanned by gentle breezes.

Unlike other palaces, where there is a lot of razzmatazz attached to such a tour, Bhainsrorgarh Fort is your home while you stay here, so for my tour I pranced around its three levels, besides stumbling upon views and finds around the grounds. Old pillars lie across the central courtyard where another wing was to be built, perhaps a hundred years ago. A child’s faded out palki that has been used over centuries for royal processions sits along with other relics from the past just above the courtyard.

The first level of the palace hosts the Jagat Vilas Suite, named after Maharana Jagat Singh II, who granted the jagir of Bhainsrorgarh to Rawat Lal Singh. An impressive wooden door opens up to a cheerful dining hall with excellent river views. The stately porch serves as an outdoor lounge, crowned with photographs of the family’s ancestors’ hunting expeditions, while stuffed heads of deer and neelgai stare out from the whitewashed walls. The second level hosts the Chunda Ji Suite, named after the family’s ancestor, and Maharana Fateh Vilas Suite, named after the great-grandfather of the present Maharana of Mewar who visited Bhainsrorgarh often to hunt tigers that were found in neighbouring forests that have slowly gone barren or turned into farmland. 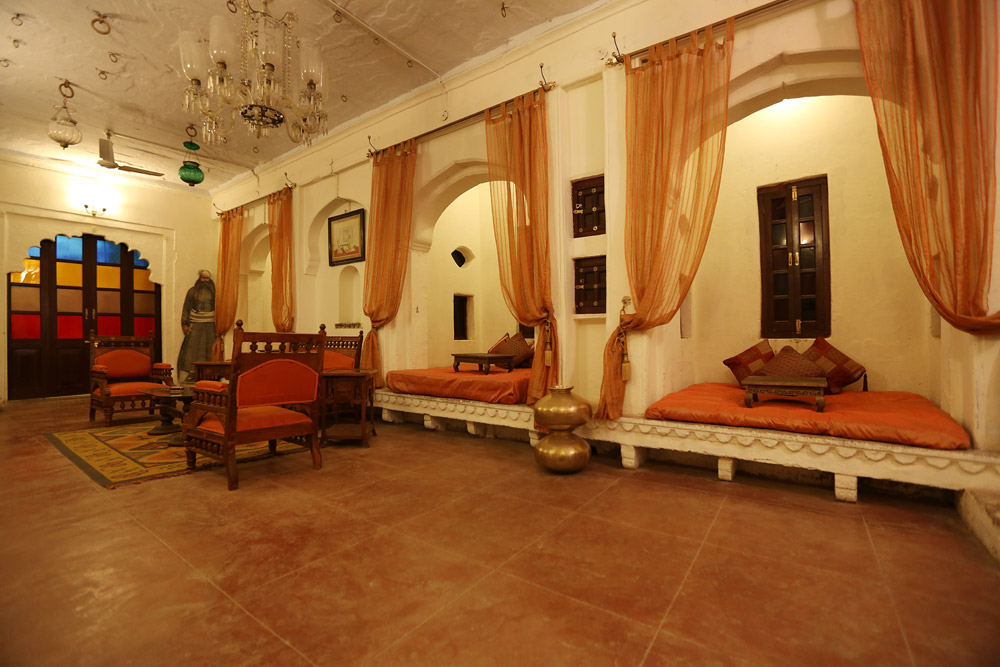 The third level hosts my abode, the Mewar Suite and the Bhainsrorgarh Suite with slightly smaller rooms but an enviably larger jharokha. The lobby of this floor is a perfect lounging area, with cosy seating areas built into alcoves. The suite is naturally bathed in orange light that flows in through the stained glass windows.

Finally, The Terrace — and that’s definitely my favourite. I come back up to enjoy the ravishing daylight views over lunch under the jharoka. The royal meal with an amazingly delicious gatte ki subzi competes for attention with the scrumptious views. The wind makes delicate patterns over the crystal clear waters of Chambal below, an open door in the ruins of the old Jenana (ladies’ quarters) plays havoc with my imagination, while on the opposite bank the wheat fields move slowly in the breeze. On my next trip, I wish to glide here on a magic carpet along with my other half, landing softly straight onto the terrace

All it takes is 5 mins from expressing my desire to see the fort by water to the simple traditional boat being mustered for the task. Evening tea on the boat can be organised over a cruise by dusk, should you so desire. Even from up close, the Chambal is sparkling clean.

View of Bhainsrorgarh from the Chambal River

Perhaps a swim is not so advisable, there is after all the odd croc to fear, but just being rowed on lusciously lapping liquid silver is an experience to savour. The fort rises regally from the left bank of the river, just starting to catch the colours of dusk. We reach the point where the Chambal meets the Brahmini and there’s yet another surprise in store. Shrouded by trees are the ancient carved chhatris, the royal memorial ground, where the family’s ancestors’ ashes lie buried. Also accessible from the palace, this picturesque spot is perfect for a couple to spend a quiet afternoon over a picnic. There are chhatris for the gods as well. Hanuman stands unflinching in spite of the huge tree that has recently fallen over, its branches embracing the god.

The Valley of Dusk

We are heading to an unnamed spot. Let’s call it the Valley of Dusk. The goats are going home. The pink stained sky lends its colour to the ochre dust that covers everything in its haze. Our 4WD negotiates rocky terrain, as bare-bodied bushes insist this is desert territory. What feels like miles of this suddenly turns into a mirage of cool water, flanked by green wheat. We come to a halt next to dust covered children and a tiny Hanuman temple. My host points to the hills across the water catching the warm colours of sundown. This is real, after all. Behind us, the sun has started its return journey. We gaze at the pristine scene, while a tea table is being set for us with picnic stools. It’s time for the migratory ducks to return from the Chambal. I see the last few along with some kingfisher. We drive back following the sun — now a big raging ball of fire. 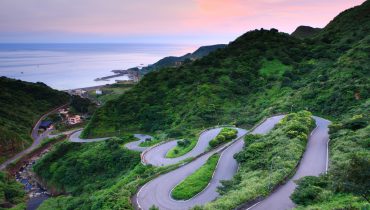