Ending almost a century-long practice (92 years to be precise), the Cabinet has approved to merge the railway budget with the union budget. 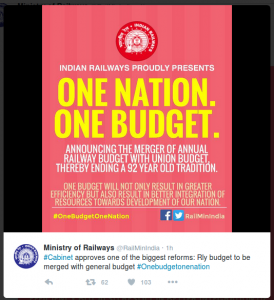 It is important to note that the Union Cabinet has approved advancing the date of presentation of the Union Budget by a month. The aim is not only to boost infrastructure spending but also to make the process a lot simpler by removing the expenditure classification.

The proposals of the meeting were made clear in a meeting chaired by Prime Minister Narendra Modi.

Here are a few important things to know:

1) The move is aimed at getting all the legislative approvals for the annual spending and tax proposals before the beginning of the new financial year on April 1. Accordingly, the beginning of budget preparation will be advanced to early October. The government is likely to convene the budget session of Parliament before 25 January 2017, a month ahead of the current practice. The pre-budget economic survey will also be advanced.

2) The advance estimates for GDP will have to be made on 7 January instead of 7 February and mid-year review of expenditure by various ministries is proposed to be completed by November 15. However, a report in the Business Standard on Wednesday said the Ministry of Statistics and Programme Implementation, which releases the data, has told the finance ministry that it may be able to give only some data that early.

3) Once the rail and general budgets are merged and the date of presentation is advanced, there will be no requirement of separate Appropriation Bills as well as Vote on Account, as is the current practice.

4) With the advancement of the Budget and completion of the legislative processes before March 31, the budget cycle will itself will be advanced. This will enable ministries and departments to ensure better planning and execution of schemes from the beginning of the financial year. Until now Budget was presented on the last day of February and it is not until mid-May that the Parliament approves it in two parts. And with the monsoon arriving in June, most of the schemes and spendings by states do not take off until October, leaving just half a year for their implementation. The change in budget presentation date has been decided so that all proposals can be implemented and expenditure started from April 1 itself. This is expected to ensure better implementation.

5) The government will have to start pre-budget consultations with industry and other stakeholders without much delay as these will be ending by December 25. The ministries and departments will also have to present their detailed demand for grants earlier to Parliament.

6) The Cabinet also approved the removal of the distinction between Plan and Non-Plan expenditure as the present classification resulted in an excessive focus on former with almost equivalent neglect to items such as maintenance which are classified as non-Plan. The Cabinet felt it is the total expenditure, irrespective of Plan or Non-Plan, that generates value for the public. Plan expenditure was for the first time presented separately in the budget for 1959-60.

7) Once the rail and general budgets are merged, Parliament will have approved only one Appropriation Bill. Usually, the government introduces the Appropriation Bill, which gives it the authority to incur expenditure from and out of the Consolidated Fund of India, after the debate on the Budget proposals and voting on demands for grants. This will have to be taken up in Parliament on or before 24 March 2017.

8) However, according to a PTI report, even after the merger of the railway budget, the Indian Railways would continue to maintain its distinct entity status as a departmentally run commercial undertaking as at present. Also, the Railways would be allowed to retain its functional autonomy with a delegation of financial power rules to continue as is the case now. Finance Minister Arun Jaitley said in the press conference that Parliament has separate discussion on the Railways.

9) The most important fact is that after the merger, the Railways would not have to pay a dividend to the central government and its capital at charge would stand to be wiped off. The Railways used to pay up to Rs 10,000 crore as dividend to the government. The Railway Convention Committee, which reviews the rate of dividend payable by the railways to the government, will be disbanded. Currently, the panel also suggests the level of appropriation to various funds of the railways such as depreciation reserve funds, development fund and pension fund.

10) Explaining the likely impact of the overhaul, D.K. Srivastava, Chief Policy Advisor at Ernst and Young, said the advancement of the Budget presentation dates and processes will have tangible benefits. According to him, it would enable the govt. to release its capital expenditure before monsoons, which is an important development.

According to Shiv Gopal Mishra, General Secretary of All India Railwaymen Federation, “We welcome the move to merge both the budgets. The government had taken us into confidence before this. This will help railways, if finance ministry also takes up its subsidy burden, pension liabilities and if there is a waiver on dividend front. Moreover, the time of Parliament will also be saved.” 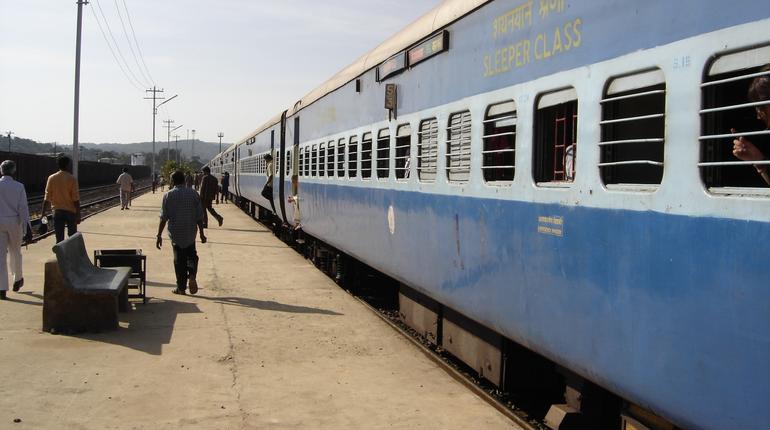