Suddenly, there was an ominous rustle from the right side of the jeep. In a blur of dust and noise, a rhino came charging out of the tall grass, heading straight up the embankment for us. As the driver quickly accelerated, we tried simultaneously to grab our cameras and videos, hang on to dear life, and not show how terrified we actually were. We had been charged several times over the previous few days, as we had driven through the fabulous landscapes of the Kaziranga National Park in Assam. Most of the earlier rhino charges had seemed quite benign, more like a case of being gently warned off. This one, however, meant business. After driving off a little distance down the raised track, the driver stopped so we could watch the rhino and take more pictures. Ignoring us completely, the animal headed back into the tall grass, and then, with an amazing burst of speed, he rounded on us from the other side. This time, we had to admit defeat and with an undignified crashing of gears and jolting of passengers, off we sped in a cloud of dust leaving the rhino the undisputed winner. 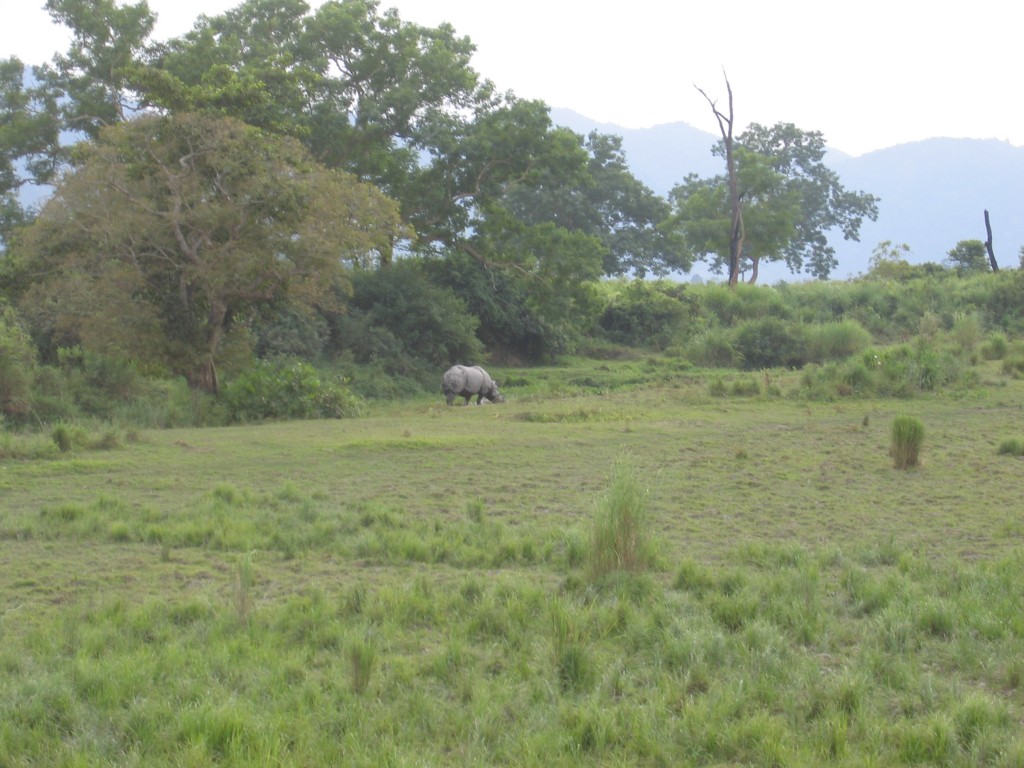 Of all the game drives we would take over our five days in Kaziranga National Park, one of the many places to visit in Assam, that drive was by far the most adrenalin-packed. Other drives were spectacular and full of amazing sightings but that drive was, quite honestly, plain scary. I lost track of how many times the rhino with attitude came thundering towards us, but it was quite enough for a day. Whatever we may have done to irritate him, he had made it clear that we were on his turf. We went to Kaziranga, happy at the idea of exchanging Delhi’s rush hour traffic jams for early morning mists and elephantine traffic jams of an altogether delightful kind. Bundled up in blankets and jackets in the bitterly cold pre dawn morning, we drove in our jeep to the elephant ‘taxi stand’.

Tuskers trundled slowly out of the mists, and stopped at an elevated stand up onto which we visitors climbed. Once were all safely on board, three on each elephant, off we swayed into the thick damp mist. The early morning elephant safari was pure magic. Two young elephants accompanied us, trotting happily alongside us or stopping to eat and then running to catch up, like two puppies out playing. Sambar and swamp deer obligingly got out of our way, and we went on further into the deep grass, at times hardly able to see even the other elephants through the swirling mists. Then, to our silent, thrilled delight, through the swirling mists, we glimpsed a rhino – the Great Indian One-Horned Rhinoceros. Our mahout grinned in delight and headed off towards the grazing rhino who gave us the briefest of glances, and then returned to breakfast. Clearly, the elephants didn’t spook him and we had a magnificent, if misty, sighting. Kaziranga National Park is a nature lover’s dream. 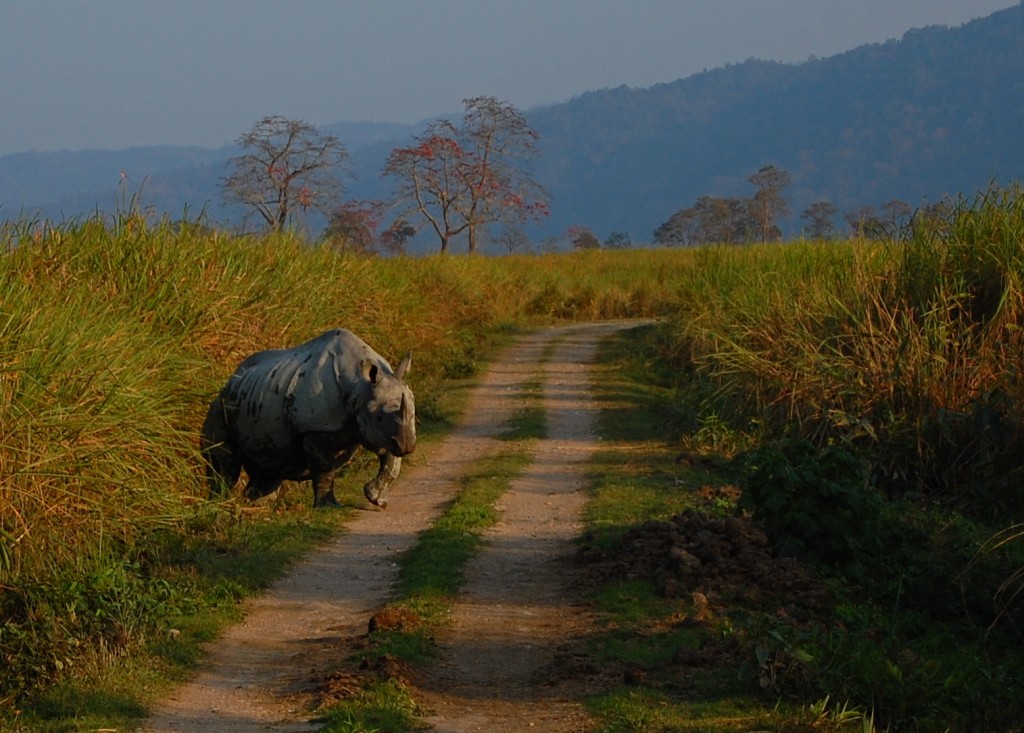 That would be the first of many rhino sightings over the ensuing days. The Kaziranga National Park is home to the world’s largest herds of the Great Indian One-Horned Rhinoceros and the Asiatic Wild Water Buffalo, both of which we saw in abundance. There were elephants galore, including one hugely pregnant lady, who looked almost as wide as she was tall. This beautiful 430 sq km National Park is home to more than half of the world’s population of the one-horned rhinoceros. There are large herds of elephants and Asiatic wild buffaloes, as well as gaur, swamp deer, sambar and, always a thrill to see, the elusive tiger. Recent statistics suggest that Kaziranga is currently home to 1,855 of the world’s estimated population of 2,700 horned rhinos. On the positive side, this means that sightings are frequent and voluminous — you don’t just see one solitary rhino, you see lots of family groups. The flipside, however, is that this large concentration of animals, ironically, makes them a favourite target for poachers. For generations, poachers have killed rhinos for their horn which some people believe to have aphrodisiac qualities.

The horns are also much in demand from the Middle-east where they are turned into the handles of ornamental daggers. The money involved is huge: once the horns are smuggled out of India, they can sell for anything up to ` 15 lakh per kilo. Kaziranga National Park was declared a sanctuary in 1940 to counter excessive rhino poaching. Yet, over 70 years later, rhino poaching is still a major issue. Over recent years, there have been reports in the media that rhino poaching in Kaziranga has, of late, taken on a new, political dimension. Not only are these unique animals being slaughtered in increasing numbers, they have additionally become a factor in the militant struggle in the North-east of the country.

In January 2009, the Forest Minister of Assam went on record to say that there was “a nexus between poachers and militants.” Basically, the horns of the slain rhino are now being bartered for arms by militant groups in the North-east. The Assam government is contemplating using the police and even the army to try and defeat the poachers, and they have recently established the park’s first-ever floating anti-poaching camp. Admittedly, it is just a small vessel, designed to house and transport four guards at a time, but it is a positive step in the right direction – the aim is to block one of the poachers’ favourite access route in and out of the park, via the Brahmaputra river. However sad these poaching realities are, the happy fact is that when you are in Kaziranga, driving around on a game drive, you are privileged to see large numbers of rhino. On our recent trip, we counted 189 rhinos in four days, much to the disappointment of our youngest member, who was trying to outdo his sister’s score of 194 the previous year!

Some of our best elephant sightings were along the banks of the Brahmaputra which is the lifeblood of the park. One morning, there was just our jeep out, with my husband and I aboard. I think the rest of our party was taking it easy over a lazy breakfast. We drove along the banks of the river, delighted to see a small herd of elephants wading across the river, knee-deep in water lilies and greenery. They all made their way to the far bank where, suddenly, we spotted (but not for long) a rhino drinking at the water’s edge, close to where a mother and her young elephant were wading ashore. The young elephant was having none of it, and waving his trunk around, he charged the rhino who shot off at high speed. Mightily pleased with himself, the young elephant returned to his mother and they disappeared into the lush vegetation. We were privileged to see a family of otters sunning themselves on the river bank, their damp furry coats glistening in the sun. Startled by the noise of our jeep, they dived gracefully into the river, in one combined swoop, putting any synchronised diving team to shame. Then the most extraordinary thing happened. Our driver started making soft clucking sounds, and all the others stopped swimming and listened. The driver continued his little sounds, and to our astonishment, the animals all turned and swam back towards us, probably wondering who on earth we were. That was not the first time the driver called in animals for us, with his extraordinary ability to mimic sounds.

Kaziranga did us proud, showing us wonderful creatures day after day. We saw a tiger, so camouflaged that everyone in our two jeeps had to struggle to find him. He sat there deep in the riverine vegetation, blending in so perfectly that we would never have spotted him, without the driver’s keen eyes. We saw a dramatic forest fire. We saw elephants on patrol with the forest guards, who ride majestically through the jungle on the lookout for poachers. One afternoon, we were told that forest rangers were trying to rescue an injured rhino that was trapped in mud, and, to our delight, we were allowed to watch from a safe distance. The rangers attached chains around the poor creature, and tried to drag him out of the mud: he was so injured, severely mauled by a tiger, that he was too weak to get out of the mud, and a tractor had to be used to haul him to eventual safety. It was a nerve-wracking experience watching the rescue, and we were safe in a vehicle, not on the ground with the brave rangers. 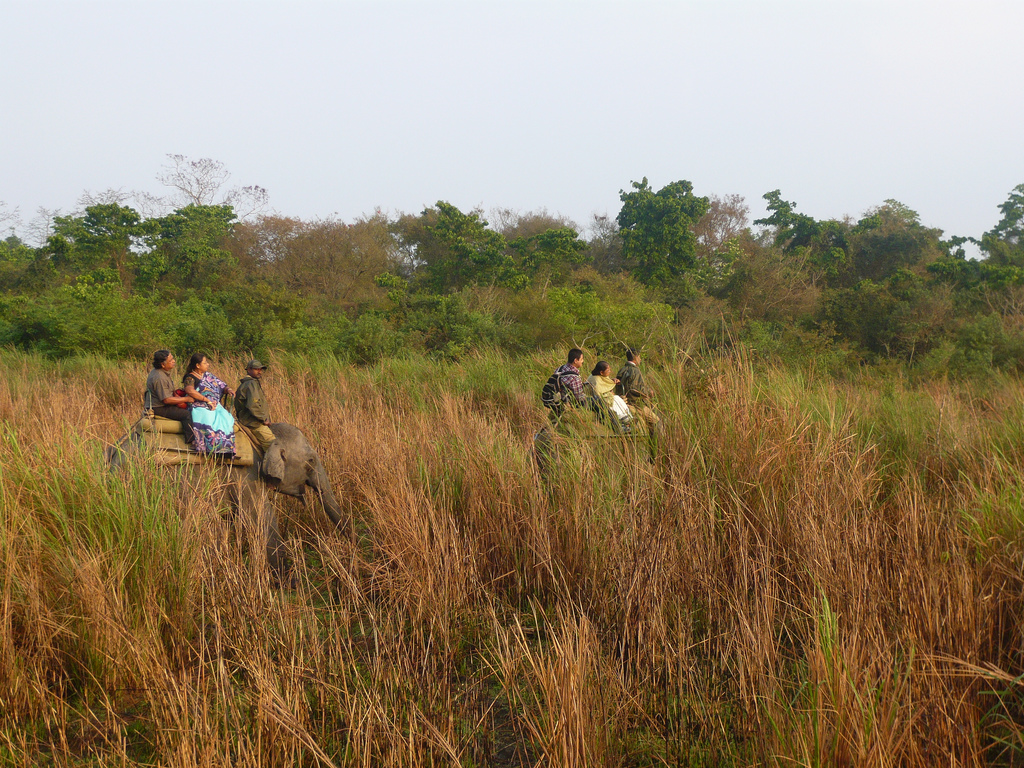 On our final day in Kaziranga National Park, we were invited to have lunch with the resident forest guards in their log huts. Lunch was long and delicious, and afterwards, while some of us dozed, and others sat and chatted with the guards, I sat out on the deck and looked out in quiet contemplation at the wide, floodplains of the Brahmaputra. To round off lunch, as though we hadn’t eaten enough, we drove to the next forest guard’s hut for late afternoon tea. On the way, we stopped at a lookout tower, with a commanding 360 degree view of the plains, and dutifully climbed up to see what game there was. And game there was, in abundance, as I counted a staggering number of rhinos – 75 in all. It was a fitting end to an amazing, occasionally alarming, and eye-opening trip to a beautiful sanctuary.

The nearest airports are Jorhat (88 km, takes an hour and 45 minutes by car) and Guwahati which is 255 km from Kaziranga. From Guwahati, you should factor five hours to get to Kaziranga, allowing for city traffic, stops for snacks and coconuts. They are worth stopping for.

Park Fee: The fees are different for foreigners and Indians.

Hat, sunblock, water, binoculars, camera and other paraphernalia required like a tele-photo lens, to get good wildlife shots. You will need a tripod or monopod, or at the very least a bean bag to support it. If all else fails, use your jacket or sweater bundled up to form a support for your long lens. Make sure batteries are charged before you set out. Nothing can be worse than your battery packing up when you see that elusive tiger. Download your photos after each drive, or ensure you have enough memory cards. You do not want to be sitting in the jeep on a fabulous sighting, hurriedly erasing earlier photos from your memory card.

Wear light colours like beige, green, fawn, light brown so that you blend in with the jungle vegetation as much as possible. The idea is to be as unobtrusive as possible, so as not to startle the wildlife you have come to see. Wear comfortable clothing, and wear layers for the bone-chilling early morning will soon give way to sunshine. Comfortable shoes are inevitable.

Unless you have hired a separate vehicle for yourself, you can also get a shared vehicle with other visitors. If you are using a tripod or monopod in the jeep, go for the latter as it is easier to use. Be quiet throughout the drive. If you talk and shout, the animals are going to take off long before you arrive. Help others find the animal or bird. Everyone is searching from a different angle, and what may be easily seen by you may well be only partially visible to someone else because of a branch or leaf in their angle of vision. And don’t ever get down from the vehicle without your driver and ranger’s explicit permission. This is the jungle and those are wild animals. And you’re in their domain. Never forget that. 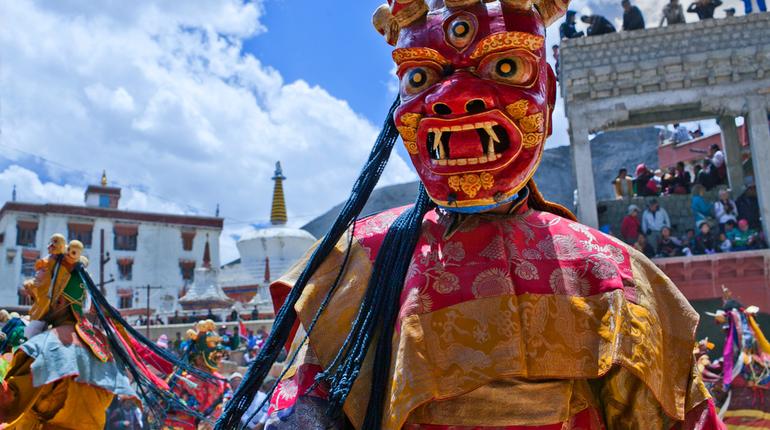