Loud hoots, frantic as ambulance sirens, came through the thick lining of my sleeping bag and jolted me awake. I scrambled out of the tent to find the sound coming from the ridge below, then from the slope behind, and then from the hill to the north. As soon as I realised that it was the call of a male satyr tragopan, I ran off to record the time and other details. We were camping at Alubari within the Neora Valley National Park. This was to be my home, and a source of great delight and excitement, for the next few weeks, as I mapped and researched the wildlife of the region.

The Neora National Park (200m) is named after the river that flows within the park. The park has a number of torrents and hill streams spread like a net, feeding the Neora River and sustaining a wonderful array of vegetation within the protected area. From tiny wild strawberries, wild white orchids (Kurseong white orchid) and primulas, to the towering Himalayan yew and hemlocks, the park has an amazing variety of flora which in turn supports an impressive population of birds and mammals. The area is home to more than 200 species of birds. The patient trekker has every chance to see the flashy male satyr tragopan, kalij pheasant, golden eagle, Jerdon’s baza, nutcracker, magpies and numerous finches and sunbirds.

During spring and summer, the entire area is filled with the songs of different species of cuckoos, from the Indian cuckoo and the large hawk cuckoo to the oriental cuckoo and the lesser cuckoo. Mammals in the park include the tiger and the leopard, among the big cats. While pugmarks and scratch marks of the Asiatic black bear are common, sighting the rare red panda could be difficult. The goral and barking deer oblige by putting in regular appearances. The higher ridges of the park are clothed in different hues of red, pink and white blooming rhododendrons during the spring and summer.

About 10 species of rhododendrons have been recorded here, from the scarlet gurans to the milk-white chimawl. The trail near the Rechi La top is covered with a veritable red carpet of flowers shed from the trees during this season. Visible from the top of the pass is the magnificent Kangchendzonga Range, a sight that amply compensates for the long hike to the top. In close competition is the breathtaking view of cloud cover, over the valley of Bhutan, on the eastern side of Rechi La.

On the Lava-Damdim Road, a bridle path heading south-east hugs the slope just below the Nature Interpretation Centre. An 8-km jeep-taxi drive through the oak-rhododendron-fir forest past the Pankhasari Check- Post will take you to a place called the Zero Point, where the road ends, and from where you will start walking. Look for the trail going downhill on the left towards the pump house (today’s walk is downhill all the way). This is steep at places so carry a bamboo staff to help stay steady. About a kilometre away is the Neora River.

There is also a pipeline that supplies water to the nearby settlements. Walk along the pipeline towards the north-west, entering an oak forest for a couple of kilometres until you arrive at a flat piece of land called Jaree-Butee. The place is full of wild strawberries and hidden amidst them are medicinal plants, hence the name Jaree-Butee. Alubari is about 3 km from here. The track continues along mountain streams and enters a moist, temperate forest with long mossy growths hanging down from large oak trees. The camp at Alubari is near the river, and the large rocks provide good shelter for setting up a makeshift kitchen. Spend a night here to see the kalij pheasant, whitethroated laughing thrush and chestnut-bellied tesia in the valley. Ask the guide to show you an Asiatic black bear’s feeding place on an oak tree, popularly known as bhalu-ka-gur or the bear’s nest.

Be prepared for an uphill slog today. Walk out of Alubari Camp (3,152m), past an old wooden bungalow, heading north. Watch out for the red-headed bullfinch as they are found in good numbers here and can be a photographer’s delight. From this point, the path heading north-east enters dense oak and rhododendron forest interspersed with bamboo groves, climbing uphill, and continuing for about 4 km. While walking, watch out for remnants of camouflaged bunkers, which were once used by the Indian Army for keeping an eye on Bhutan and Sikkim. The trail is full of fallen leaves, and goes in a northward direction through fir and hemlock forest and bamboo thickets.

The final part of the climb is through rhododendron forest. During spring and summer, there is always a red-carpet welcome for visitors. Before reaching Rechi La, turn towards the east to get to the Rechi La Camp. This is a concrete construction, with a long hall and a kitchen that can accommodate up to 10 people. The toilet, though, is in disrepair. Rechi La Top can be reached by walking back and following the trail northwards. A short 10-15-min climb will bring you to the top (3,152m). Spend the evening on Rechi La Top to see the lights of Gangtok Valley and return early the next morning for the sunrise. This place is wonderful for sighting sunbirds and flowerpeckers. Also present is the spotted nutcracker.

Take the trail that goes past the Rechi La Bungalow towards the eastern side. It crosses three ridges in a series of switchbacks and goes down towards the villages of Todey-Tangta for about 4 km. It doesn’t take more than 2 hrs to cross the three ridges and descend. On the right hand side of the trail is a big lake where you can spend some time checking for pugmarks of bear, leopard, goral, barking deer and lesser cats. The waters are clear and the reflection of the blooming rhododendron on its surface is an unforgettable sight. By the side of the trail are makeshift huts of shepherds, locally known as goth. Look out for small white-washed ritual figures on crevices of rocks or slope by the trail. Return to Rechi La following the same route for the night. 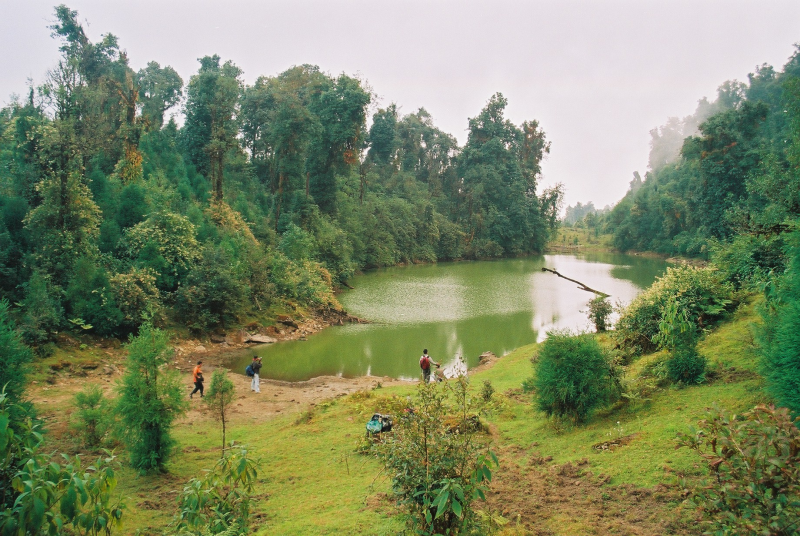 Today is an easy day going downhill all the way to Alubari. Follow the same trail from Rechi La Top to Alubari. Just before you reach Alubari, take the road that bypasses the camp and follows the main Pankhasari Ridge uphill in a south-westerly direction. A couple of kilometres from Alubari Camp is the area known as Pankhasari Top. You will find the ruins of a bungalow built by the Army during the British Raj. The flat ground provides a good site for pitching tents, but it is advisable to locate the water source, which at times can be quite far from this ridge top. This place is famous for its white and cream-coloured rhododendron or chimawl. Spend the evening on the ridge’s slopes to hear the hill partridge and satyr tragopan.

Trek downhill, due south-west, following the Pankhasari Ridge through the oak forest, and then pine-fir plantations, to reach just above the Pankhasari Check-Post on the Lava-Zero Point track. From Pankhasari to the check-post takes about 2 hrs, with sightings of Himalayan greenfinches among the pine plantations. From the check-post, walk back towards Zero Point for some birdwatching. An occasional red panda is also not unusual. This place is full of kalij pheasants, hill partridges and hill barbets. The walk is mostly downhill and there is only one bridle path going down in a general south-westerly direction. The trek following the bridle path to Lava is easier. The other option is to use the chorbato, or the steep short-cuts to Lava. At Lava either stay overnight or return to Kalimpong the same day by taxi.

Instead of returning to Lava from Rechi La, there are two other options that can be followed. With the help of a good guide, one could pass through Todey-Tangta to go further south to Chalsa, the roadhead in the Dooars about 20 km away. It is an easy walk on a motorable road through fields. It takes about an hour and a half by vehicle. So, if you don’t feel like walking, a taxi ride is an option. Seasoned trekkers could do the Rechi La-Mouchouki-Samsing route. This route requires some mountaineering experience. Cliff-scaling skills and ropes are useful. Samsing is an hour’s drive from Chalsa town.

About the author: Dipankar Ghose. a wildlife biologist, is well travelled across Eastern Himalayas and North-East India. He has authored numerous scientific articles and travelogues in regional and international journals and magazines. At present he is involved in field-based conservation work in the Eastern Himalayas. Birdwatching, nature photography, trekking and illustrating are his hobbies.