It’s a sight to quicken the pulse; to thrill visitors unused to the behaviour of wild animals; to amaze even the tourist skeptical of safaris that all too often resemble a visit to the zoo. A pair of lions, a regally maned male and his dignified mate, gambol beside a water source. At first, the lion worries a plastic bottle left behind by some careless visitor. Even as I start to fret that he’ll ingest the plastic, he loses interest in it and starts to tug at his mate’s tail instead. She puts up with it for a while and then snarls a warning. They end up in a half-hearted squabble, mock wrestling and growling just a wee bit. We watch for a while and reluctantly drive on. I wonder about the fact that the lions didn’t even spare us a glance, though our van had been parked just a few feet away from them.

I am in the Bannerghatta National Park, Bengaluru’s favourite getaway. I have signed on for a Jungle Lodges Resorts (JLR) night-stay package, which includes all safaris and meals. Earlier that day, I had checked in at the JLR camp; 1 and 1/2 kms inside the park, past ponds filled with blooming pink lotuses, huge anthills black boulders of all sizes, and an overreaching canopy of bamboo. As one approaches the camp, spotted deer and sambar stop to cast curious stares. 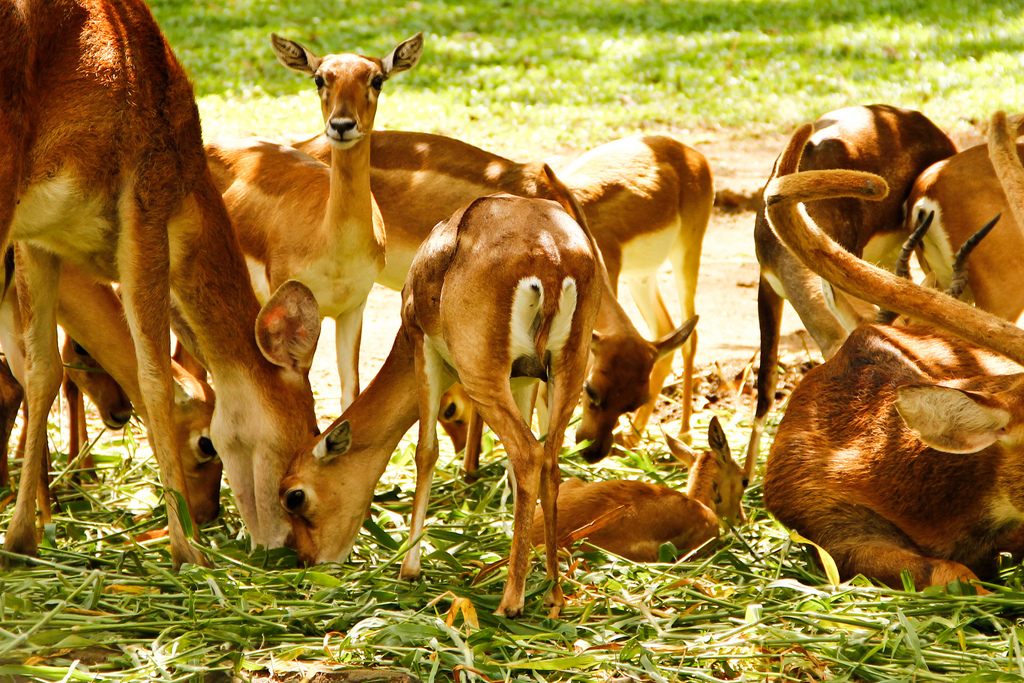 Deer at the National Park (Photo by Natesh Ramasamy)

When I am in my tent, I hear the loud chatter of birds and look out for them. And I find them in all hues… green winged, brown-throated, sleek black, bright yellow and blue… hopping on leafy branches and flitting from tree to tree — each adding its own mellifluous tone to the bird chorus. At 3 pm, I set off for the Grand Safari with some other guests, in the safari van. The Grand Safari includes the Lion Safari, the Tiger Safari and the Bear Safari. We do the Bear Safari first. The park has 95 bears, of which we glimpse a few. Some are fast asleep curled up against rocks, others nose around the trees, still others are shovelling up mud. One little fellow is so alarmed by the sound of our van that he scampers behind a building and pokes his head out to see if we have left. Some of these bears are animals rehabilitated from circuses. The Tiger Safari is the next highlight. In the tiger zone, we have one well-fed cat come up close to the van and sniff us. His attention wanes soon, however, as another tiger approaches the wire enclosure here and he goes off to guard his territory with a threatening roar. To add to the sound and fury, a white tiger comes up on the other side and roars lustily. I imagine these roars reverberating across an open jungle; an awesome sound that can only be described as thrilling. 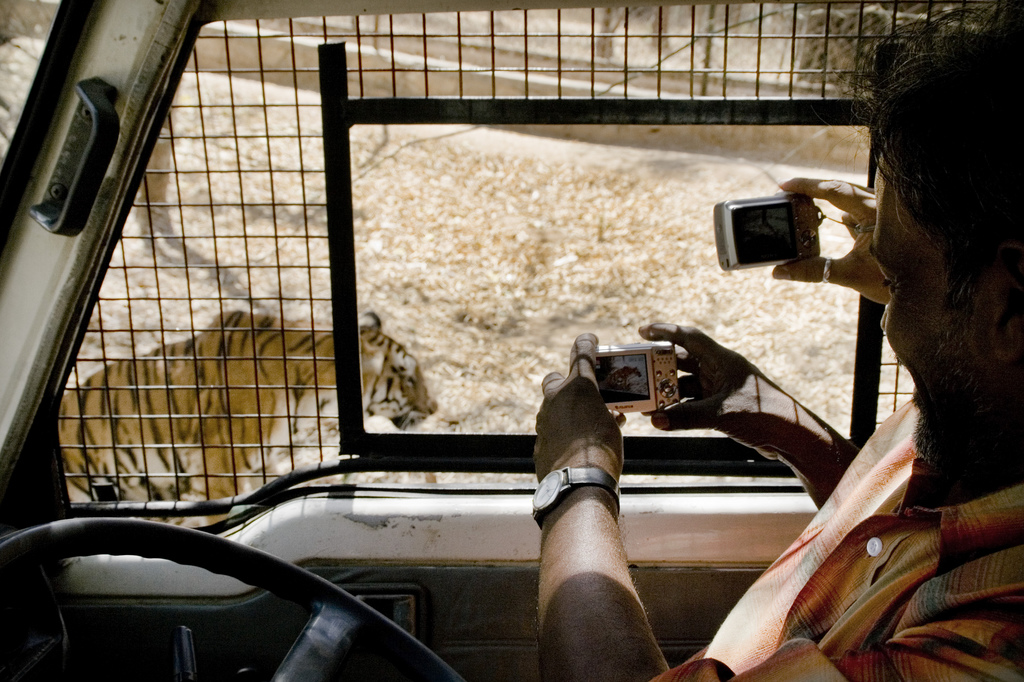 It’s not our day for spotting elephants, however. We don’t spot even one, in the range or anywhere else. However, on our way back to the camp, we see a young leopard saunter down a dirt path, all sleek muscle and power. The safaris, stage managed or not, make the Bannerghatta National Park visit fully worth the time and money. Back at the camp, I decline the offer of a wildlife movie and bonfire. Instead, I climb into a hammock, close my eyes and relax; I listen to the wind whistle high among the treetops. After a while, I look up to see the miniscule light of a plane blinking far up, and as the night darkens, I watch the stars grow brighter, framed by leafy fronds. Suddenly, the night seems full of the distant roar of big cats. 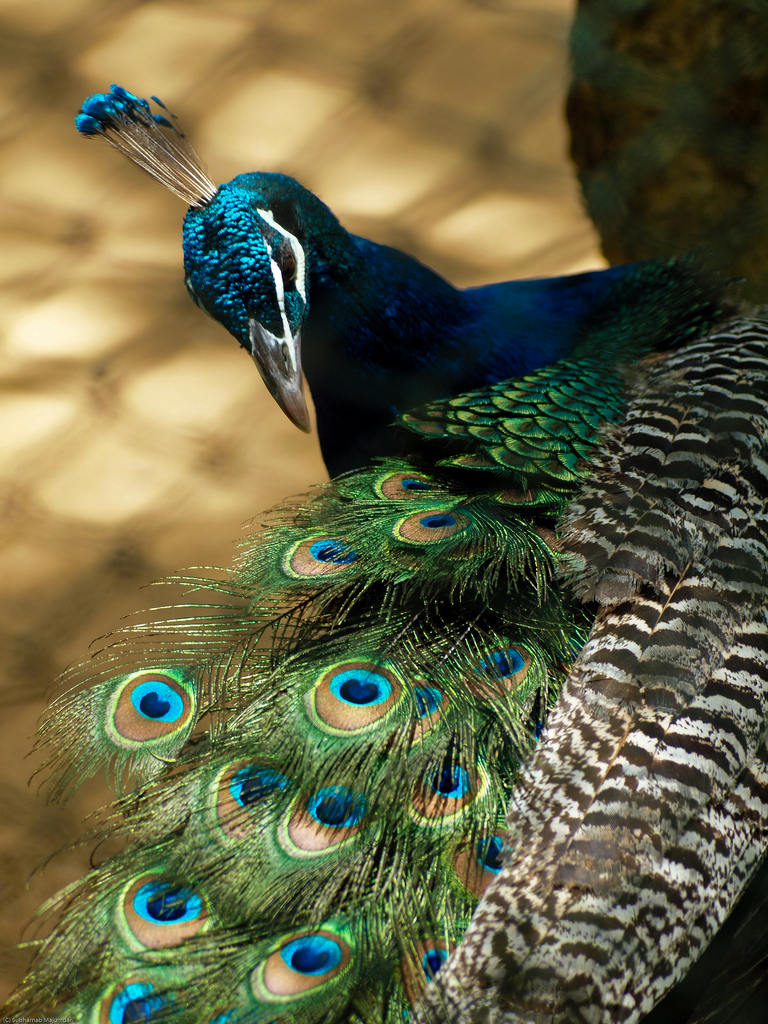 Next morning, after my wake-up ‘cuppa’ tea, I head outside where KN Mahadeva (“Call me KNM”), the affable guide, is ready to take me on a 40-min walk through the Herbivore Safari grounds. Sambar, gaur, antlered deer, all stop to stare at us, a little disturbed by our presence. A female sambar comes up close to say a personal hello. We come upon a pack of magnificent gaur and KNM tells me not to lock eyes with the most magnificent specimen, Arjun. I can’t help but look at him, find him looking back coldly at me, and I look hurriedly away. The walk yields sights aplenty. Herons, kingfishers, jungle fowl, herds of antlered deer, spotted deer, chinkara, barking deer, nilgai, and even rock formations. I was particularly intrigued by a woodpecker’s insistent drilling at a branch.

Breakfast is puri bhaji and egg and toast, chased down with some excellent coffee. We then head to the zoo, which is a fun ramble but quite tame after the safaris we did the evening before. We get to see many elephants at their gathering point, though. When I leave the place, it’s with a heart and mind full of big cats, regal, dignified and simply magnificent.

State: Karnataka
Location: Just south of Bengaluru City in Bengaluru (Urban) District
Distance: 23 km south of Bengaluru; journey time: by road 1 hr
When to go: Open all year round but you get to see the park at its greenest between mid-June and August.

About the author: Someday, Sheila Kumar will go see places just for the sheer pleasure of seeing places. Meanwhile, she hits the road, song on her lips.