A drive through the Eastern Himalayas takes you to the beautiful tea gardens of Darjeeling, the amazing Nathu La and Tsango Lake and the breathtaking views at Kalimpong and beyond.

A journey around the spectacular environs of the Eastern Himalayas is best conducted by road because it offers you a mosaic of enlightening and highly memorable experiences amidst one of India’s most thrilling natural landscapes. The mountainscapes, the lush paddy fields and forestlands (rich in wildlife) interspersed by silvery rivers and streams, the amazing swathes of tea plantations (in the Dooars Valley and up in the Darjeeling Hills), the astonishing orchids around Kurseong and Kalimpong – wildlife parks and historic palaces — and the vignettes of the world’s third highest peak Mt Kanchenjunga from both the plains and mountains— are more than reason enough for you to pack up your bags, leap on to your mount (in this instance a sturdy 4X4) and keep at least 10 days aside for the journey of a lifetime…

From the hill station of Siliguri to Kurseong, of orchid fame, you’ll be accompanied by the crazy track of the pretty little steam toy train — Darjeeling Himalayan Railway, which enjoys a UNESCO Heritage status. By the time it has struggled up the steep inclines to Ghoom (the world’s second highest railway station) it has reached a height of 7,407 ft, after having negotiated the Batasia Loop, an engineering wonder. Joyrides can be enjoyed from Darjeeling Station to the Ghoom Monastery. 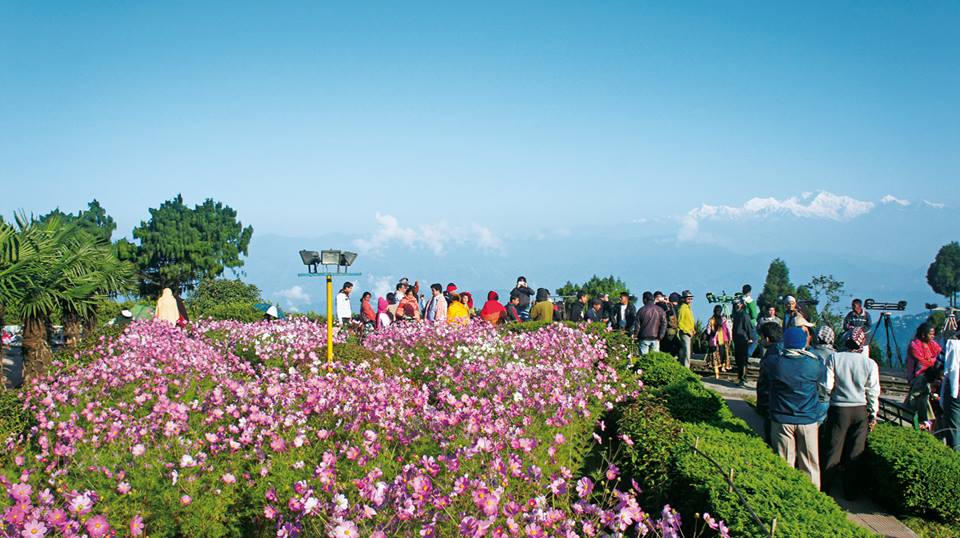 Tourists at Batasia Loop enjoy the view of Mt. Kanchenjunga

At Darjeeling, spend your time breathing the fresh mountain air, soaking in the scents of the wildflowers amidst stopovers at the Himalayan Mountaineering Institute (HMI), which was set up in 1954. Darjeeling is the home of the Sherpa Tenzing Norgay, who accompanied the New Zealander mountaineer Edmund Hillary, to be the first to conquer the world’s highest peak — Mt. Everest. Tenzing was director of the institute for many years. Today Tenzing’s son runs an adventure tour company here, arranging expeditions for the global mountaineering community. Visitors keen to learn rock climbing can sign up for practice at the Tenzing Norgay Rock on the outskirts of town. The institution also provides training in mountaineering. To get a peek into this fascinating world do pop into the Everest Museum here, which has records of various expeditions including the many attempts made on Everest subsequently.

A trip to the Padmaja Naidu Himalayan Zoological Park is a lovely treat for kids. The institute also conducts an invaluable conservation programme for the endangered snow leopard and red panda. While waiting for the mists to clear for the views of Mt Kanchenjunga shop for souvenirs and go pony riding at Chowrasta. Don’t forget to pick up your favourite brand of Darjeeling tea at the shops at Chowrasta. It makes a great gift for friends and family back home. Wake up before dawn to head for nearby Tiger Hill for the Eastern Himalayan snow-peak views at sunrise.

Those with green fingers might want to explore the hothouse varieties of over 50 species of orchids on display at the Lloyd Botanical Gardens. The beautifully maintained garden of the royals of Cooch Behar, known as The Shrubbery, to be found behind the Raj Bhavan, offers glorious views of the Mt Khanchenjunga. A tea estate homestay at some of the legendary tea plantations around Darjeeling is highly recommended. You need to plan this in advance.

The Bhutia Basti Monastery is worth exploring. It was originally set up on Observatory Hill by Lama Dorjeringzing in the year 1765. But when the monastery was sacked by the Nepalese in 1815, it was felt to be more prudent to rebuild it near the St Andrews Church in 1861. In 1979 this Tibeto- Nepalese style structure was relocated to Chowrasta’s Bhutia Basti. Check out the rare artifacts and ancient manuscripts on display. The old Tibetan Refugee Centre, is an excellent place to go souvenir hunting. You can pick up carpets, thangkas, wood carved artifacts, handmade woolens and curios. Nearby Mirik is another popular tourist hub, offering boat rides on the tranquil Samendu Lake against the backdrop of the Kanchenjunga mountains range, and walks around its pretty forest trails.

The spectacular drive from Darjeeling to Sikkim’s capital Gangtok offers many ‘wow’ moments as you bowl past the verdant birthplace of Darjeeling’s legendary tea industry and along the stunning Teesta Gorge. Stop by the Triveni Viewpoint for photoshoots of the confluence of the Teesta River with the Rangeet. 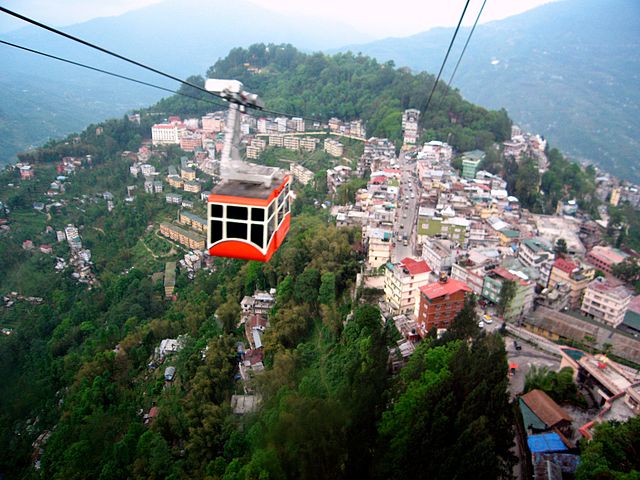 At Gangtok the one of the must-dos is the drive to Nathu La and the gorgeous Tsango Lake. Yak rides at Tsango, and a thrilling walk up to the legendary pass, are the great highlights of this tour… And you positively must keep your camera ready… For who knows when you will make this journey again soon. You’ll need to leave your car at the hotel as the tours are only allowed with a government-licensed guide and jeep. The tours are always conducted in the early morning, (as you need to return to Gangtok by afternoon, because the mists start descending on the route). So do plan this carefully to get the best out of the trip.

Gangtok springs a surprise on you. Its old-town ambiance is a rival to the fast mushrooming shops sporting global brands, interspersed by tiny alleyways in its traditional bazaars. The café, abuzz with the lure of burgers and pizzas, however, can’t drown out the lure of momos and traditional nettle- soup keeping you full and nourished. Gangtok’s annual Flower Festival, in the month of May, is a big draw as it showcases some of the most extravagant blooms to be found in the northeast states of India.

The Enchey Monastery, at a short distance from the town, offers enchanting views and tranquil moments, while the amazing Namgyal Institute of Tibetology draws scholars from around the globe to soak in the heritage of Tibet through thousands of ancient manuscripts, artifacts and the like, hundreds of years old. There are several agencies in town who arrange treks and drives around Gangtok’s gorgeous environs.

From Gangtok you’ll be returning to the Teesta Gorge via Rangpo and Mongsoong to manoeuvre the tight corkscrew drive up to Kalimpong. Make sure your breaks are in good condition. Enjoy a cold beer to recover your wits before setting off to explore orchid nurseries, shrines, peak views and shop for Kalimpong cheese. A ‘must visit’ is the legendary Himalayan Hotel from whence the likes of Tibetologists such as the German explorer-writer the Heinrich Harrer, of Seven Years in Tibet fame, and others such as Prince Peter of Greece and Rinchen Dolma Taring made expeditions to Tibet. It has hosted and assisted Francis Younghusband get his trip together. The hotel owner, the intrepid David Macdonald, in fact accompanied the Younghusband’s Mission to Lhasa in 1904 as an interpreter, and was later posted as a British trade agent in Yatung and Gyantse till he retired in 1924. Mountaineers like Hillary and Mallory would relax in the atmospheric parlour cogitating over various expeditions over brandies and warmth from the old-fashioned fireplace. The Deolo Lodge is another fine place to spend some time. Deolo Lodge, just eight kilometres from the town, is a cosy little ‘hotel’ from where you enjoy those views of the Teesta Gorge and the spectacular peak views of Mt Kanchenjunga. 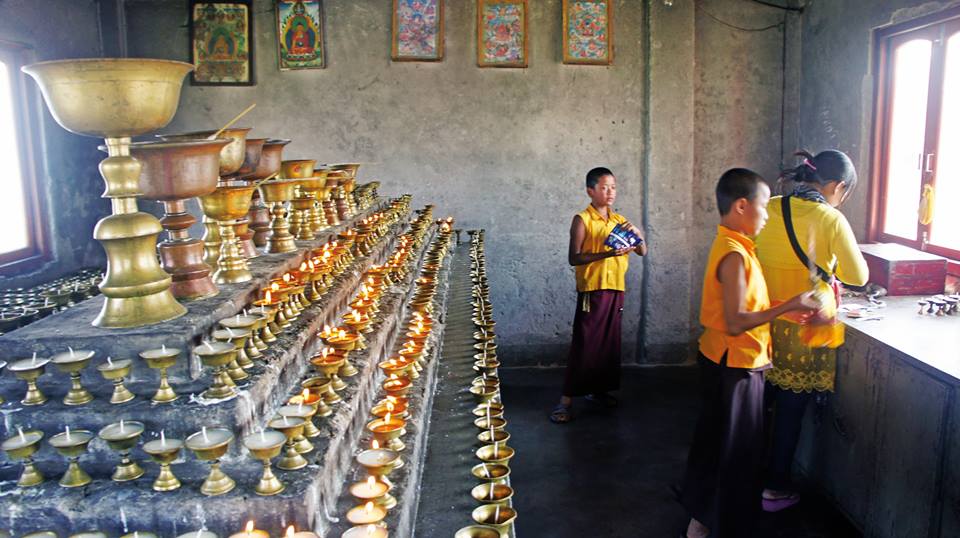 Follow the fabulously verdant, birdsong-drenched stretch from Kalimpong to the picturesque village of Lava. You can stay here for the night and explore this expanse bordering the Neora Valley National Park with its promise of views of Jelep La and Rechi La — else drive through lush forests to spend the night at the lovely Neora Jungle Lodge. Next day bowl down the hillside to rejoin the highway at Dam Dim Modh, where the Tatas have a lovely tea estate of the same name. Dam Dim offers you a tea estate stay and it can be used as a base for explorations of Jaldapara WLS, at Madarihaat, where you can espy the endangered one-horned Indian rhino on elephant back. If you want to drive on to Bhutan’s border town of Phuntsholing, now’s the time. Indians only need an ID card/voter cards and a driving licence and proper vehicle papers to get in. Head back to Chilapata where you can spend the night at the Chilapata Jungle Camp run by Help Tourism. In the morning head out for Alipur Duar and on to Cooch Behar where you can explore the classical Italian-Renaissance-style Cooch Behar Palace. Mamata didi has now connected the town to Kolkata with a spanking new airport.

Gangtok: Drive to Nathu La and Tsango lake; visit to Enchey Monastery; go for shopping in the town; visit the Rumtek Monastery

Kalimpong: Drive through the town and stay at the Himalayan Hotel for spectacular views