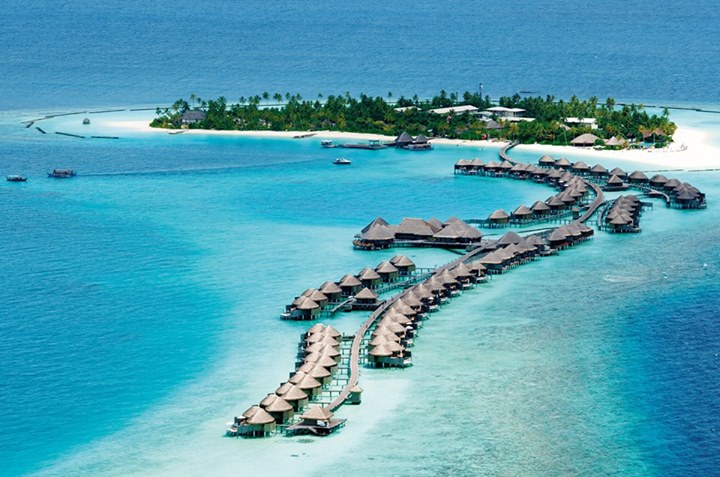 Following is the account of my amazing trip to Maldives. Trust me when I say, it was awesome! And I will explain what is an atoll. Read on.

As the aircraft took off from Trivandrum I realised I’d left back my sunglasses at the Bengaluru hotel. The kind of glaring overexposure I was headed to needed protection for the eyes almost as long as the sun was up. Its quite amazing how these pilots head out to the open skies with the unending ocean below with a compass as a guide, as by the time you’ve surfed through a few inflight readables and settled down, the aircraft starts losing altitude and it’s time to land. Forty minutes, and the blue scape below started changing with the torquoise atolls of various shapes emerging all across the ocean below. Sunglasses or not, the sight was breathtaking. At the equator, almost a stone’s throw from the south-west edge of our country, 1190 islands, 200 of them inhabited, rest beautifully sculptured by nature but all slowly going beneath the sea with passing time as the sea level rises.

Maldives is one of those rare, exotic paradises on earth that is fast vanishing from the face of it, and not much is what the human race can do to save it. So, if you haven’t yet, try and make a visit to this unbelieveable place before it’s all as blue as the Indian Ocean. Hulhule is the airport island where the far end of a not-so-long runway gets submerged under high tide several times in a day. This unbelieveable stretch of land almost ends before it starts. Pilots are extremely careful, I’m sure, with their landing maths, and it’s a treat for passengers with their faces glued to the windows to get a wide angle of the airport and the sea from their seat. Hulhule to Male, the capital of Maldives, is a 10-minute speedboat ride. Maldives is a Muslim country with strict norms on alcohol and dress code, at least in Male. With a population of 1,40,000, it’s a bustling city with some fine buildings, all on a sandy island that can be covered in a 30-minute walk. Maldives is not just about its capital. The real Maldives is in the secluded islands in the different atolls. An atoll is a group of islands with a reef that nearly or entirely encloses it in a ring-like lagoon. Maldives has 26 of these atolls, all of which are natural and are further subdivided into 20 administrative ones. The actual action is in these small islands where all the luxury resorts are located. Islands with resorts are auctioned, the highest bidder gets to run it for a period of five years till the next bid. The country’s economy depends heavily on tourism, with a near 20 per cent contribution to its GDP. The resort islands are spread across hundreds of kilometres, and are accessible by sea planes, or water taxis as they’re popularly known, and speed boats. Most of the islands have water villas and beach bungalows. These are not very big islands; you can circle them on foot in a very short time.

An aerial view of Male, capital of the Maldives (photo by Shahee Ilyas)

The airport transfer takes you to a nearby jetty where I found a red-and white sea plane and a smiling male attendant in shorts and sandals, waiting for us. The man helped the passengers get on to the wobbly floating aircraft. The pilot and his company were in shorts and sandals too which, I figured, was their uniform, being a sea-faring vehicle. As the door was shut, the engines got into full throttle and in no time we were airborne. Within minutes, scene within the aircraft and beneath us changed. Passengers became glued to their windows as the water below changed from grey to torquoise to blue, and the show started. Numerous atolls emerged out of the sea, as if hand-crafted, some with sparkling lagoons between them. Small islands erupted with designed stretches of watervillas into the sea. Uninhabited islands with greenery, and some with white sands, moved past. The landing on water was quite a bumpy experience, but the ever-smiling, shorts-clad crew made it bearable. The sun outside was as equatorial as it could get, and my new pair of shades seemed like a blessing. A small boat was waiting for us to take us to our resort that looked like a floating sandwich from the sky. The water taxi pier was a bit far from the main resort jetty in the middle of the lagoon. The brief ride to the resort jetty was quite amusing with flying fish flying along with the boat as we sped ahead. With the expanse of crystal blue waters all around us and the white-sand ocean floor visible from the boat, I knew I was in paradise. A fleet of battery-powered buggies picked us up along with our luggage from the jetty and transported us to the reception area of the resort where we were greeted with a cold towel and a welcome coconut drink. While planning a trip to Maldives, keep a few things in mind. Firstly, keeping to your taste and what you want to do in Maldives, it’s always advisable to choose an island close to the airport. The speed boat transfers from the airport or Male to the resort islands are quite costly, and air taxis ever more so. Unless you are booked under a non-Maldivian resort like the Taj or Hilton where the deals are all inclusive or packaged, keep in mind while booking that you are not allowed to carry any food or drinks to the islands and that you need to buy everything, including activities, at the islands. So, try to get an all inclusive deal for best buys with three basics pre-paid for — all meals, stay, and airport transfers. 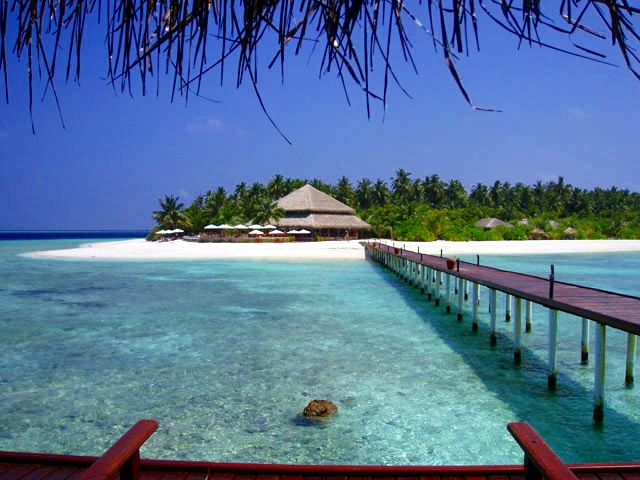 Right after the check-in process, the buggies took us to our rooms. If you’re in a beach bungalow, they generally drop you at the doorstep, otherwise, you can walk up the wooden ramp to the water bungalows. The water villas are one-of-a-kind. Most islands have water villas but they vary in design and luxury. The best ones have private infinity pools with decks. Ours was one such villa in a row of twenty. The main door opens onto a squarish living room that has glass walls offering views of the clear blue ocean. Fit for royals, the bedroom has a rectangular central glass floor from where you can see the ocean below. The private decks give you complete privacy with the infinity pool alongside, and steel stairs from the deck take you directly to the lagoon. Jump in anytime in the waist-high clear ocean and have a ball with the shoals of colourful sea life swimming around. I was speechless for a while. The sand beneath was fine and white, the temperature of the water was perfect, the only problem was the glaring sun, but you get used to it after a while.

Service is excellent despite the distance of the villas from the main room service hub or kitchen. As soon as I got out of water, soft drinks and snacks were served, and, to my disbelief, I found the man serving us speaking fluent Bengali. A majority of the staff at the resorts in Maldives are from districts of West Bengal and Bangladesh. Syed Kamal, our villa attendant, also carried out the duty of feeding the manta rays and take tourists on night fishing. We know ocean sunsets are dramatic, but the ones here would mesmerise you. The staff, understandably, is indifferent to it as they see it everyday. But for us it was dream-like when the sun started going down behind the clouds in the horizon. We decided to take a stroll on the beach after the sunset, and walked the ramp down to the beach. There we saw Syed at work, knee-deep in water feeding aroung 20 huge manta rays. The sight was stunning, and we came to know that the creatures are completely harmless, and have been coming to the very spot for years around the same time of the day. Weather in Maldives is bright and sunny one moment, and unannounced rain the next, though there’s not much fluctuation in day temperatures throughout the year. A poolside barbeque on our private deck was awaiting us when we got back. Syed, with a helper, had organised the fancy evening with our choice of wine and champagne. Apart from the regular chicken and meat, lamb, scallops, squids, lobsters and various other sea fish were on the grill. The sky cleared in a while as we continued through the evening. We spent the next few days doing some wonderful things, including a sunset fishing trip. We left the jetty around 5 pm and went out in an open boat with about eight people in it. After some 30 minutes, we dropped anchor to start fishing. We got a line each with a hook with bait and a small weight that we dropped in the ocean. 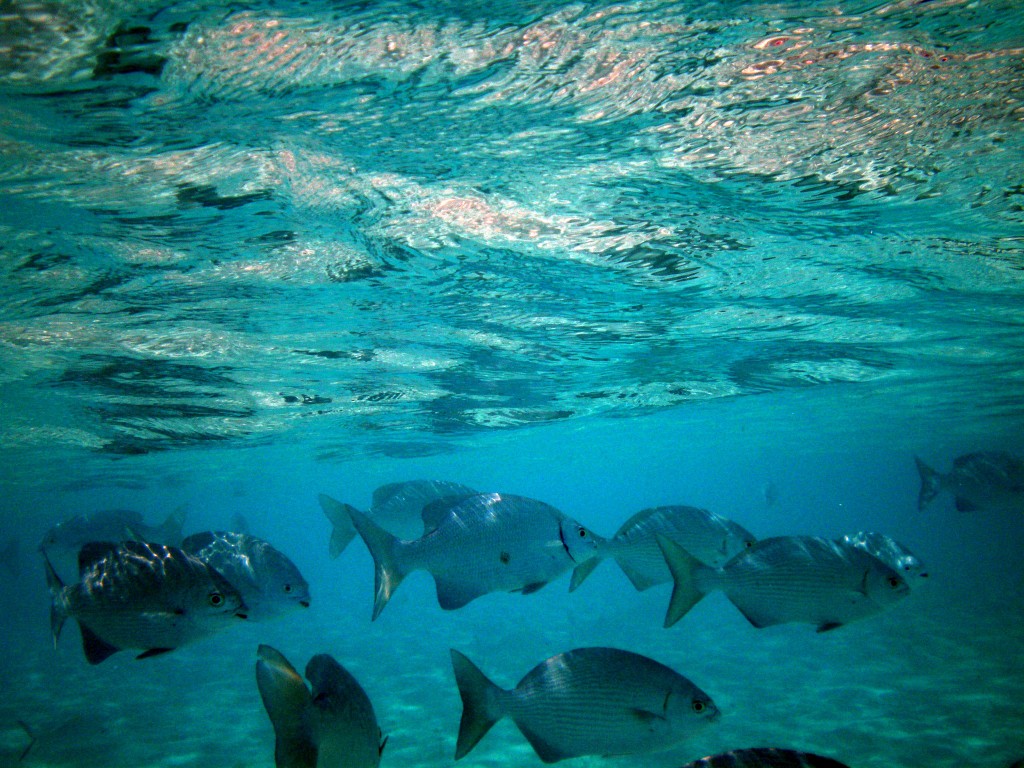 To start with, the bait was just plucked off the hook, and we lost quite a few hooks because they got stuck in the seabed. But when it started getting darker, people started pulling up fish. We managed to catch the biggest one in the fishing group — a nice, big red snapper. At about 8 pm, we got back to the island for dinner where the big fish was grilled and served with some salad and drinks. The other thing that we braved ourselves to do was snorkelling in the lagoon and learning scuba diving at a nearby diving spot that the resort instructor took us to. Lots of lazing and peaceful floating is what we ended up doing, not missing out on the exquisite Maldivian cuisine. Bicycles were available to ride around the resort but walking was more fun. Maldives brings out the best of mother earth’s beautiful side, even as you nestle in the lap of man-made luxuries. Experience it before it all goes beneath the waves.

Navigator: Catch a train or flight to Trivandrum or Cochin. From here, catch a flight to Hulhule. You get a 30-day visa on arrival. Pre-booking is necessary for island resorts.