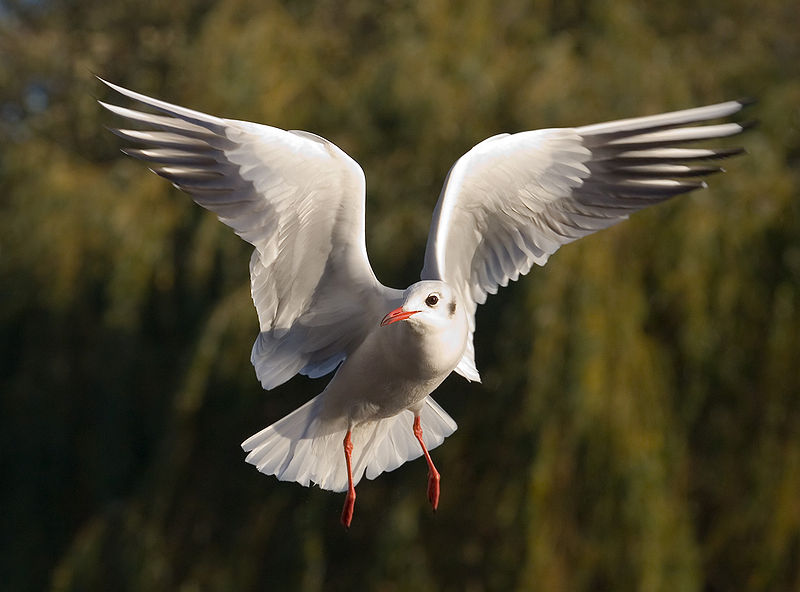 A pre-dawn serenity envelops the historic city of Amritsar as we slip through silent streets towards Harike Pattan, where the Sikh army once infiltrated British territory in the days of the Raj. Today this pretty enclave is home to one of North India’s most important wetlands, a vast shallow lake created by the confluence of the Sutlej and Beas rivers and, now most importantly, a Ramsar Site. The 285.1 sq km Harike wetland ecosystem stretches across Punjab’s districts of Amritsar, Ferozepur, Kapurthala and Jalandhar.

It’s a bit late in the season as most of the migratory visitors have flown home with the coming of the hot weather, but we’re still hopeful of catching some laggards who haven’t flown away as yet. 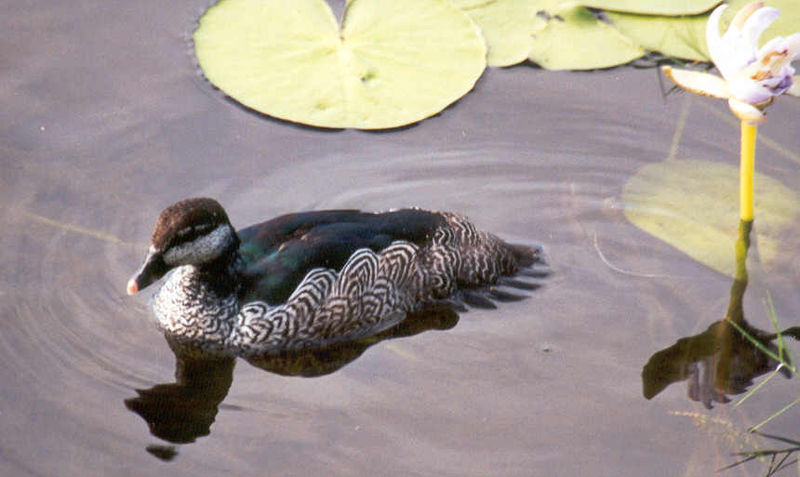 At the turn-off to the DFO’s office past the Harike Police Station, we stop to pick up petrol for the powerboat and the Sumo (for the overland tour). A little further down, the stillness of the morning air is broken by the enthusiastic shrieks of a family of rosy-ringed parakeets wheeling above the trees in the garden of the DFO’s office. At the Nanaksar Dham Gurudwara near the barrage, we park the car and head out for the clump of trees behind the temple, the traditional roosting point for the migratory salara — the yellow-eyed pigeons. The sound of the car causes a flutter amongst the denizens of the trees — then they settle down to preen as the morning rays hit the tops of the trees. The gurudwara site is a prime birding area and one should spend time exploring its immediate environs. Look here also for tufted duck, godwits, northern pintail and many species of warblers. You can cut across the marshes and follow a trail on the left which takes you past the traditional habitat of species like the Sindh sparrow and the white-crowned penduline tit. Be patient and you might get to see some other residents amongst the bulrushes that line the embankment close by. Another good birding site is the dirt track heading through the fields along the embankments into the marshlands, towards the Moga Highway, for sightings of moustached warblers and cinnamon and black bitterns.

From the branches of a tree at the makeshift jetty a solitary spotted owl watches me climb aboard the boat with the rest of the party — the tourist officer, the driver and the two boatmen (who will double as guides). Exploring the Harike Bird Sanctuary by boat for tourists is, sadly, a complete no-no. We had to get special permission. 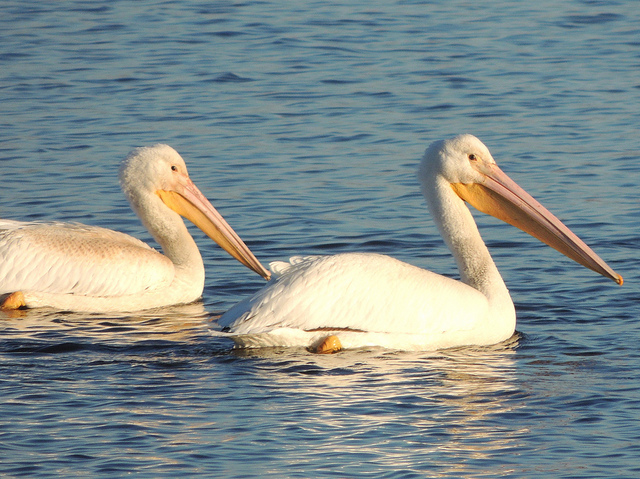 The river is a gleaming trail as it cuts a swathe through the bulrushes lining the deep embankments further downstream. Sudden cacophonous honking cuts the silence as a gaggle of bar-headed geese settles on the water ahead of us. Great flocks of these shy pale greybrown birds descend in thousands upon Harike from their breeding grounds in Tibet in October. Their strong wings carry them across the Himalaya to winter in the warm plains. Further, we come upon a couple of noisy graylag geese, residents of the cooler European climes.

The lad who steers the boat points out a posse of teals, gadwalls and shovellers ferreting for food in the rushes along the sandbars. The older boatman brings my attention to the solitary snakebird (darter) on the other side, poised for the kill in his drab brown, the picture of restrained energy as he gazes intently at the water. His patience is rewarded — swiftly his beak prods the river, and a fish gleams momentarily in the sun, before he swallows it whole. Perched on a wire above, the lesser-pied kingfisher gazes morosely at him, then turns his eyes hopefully on the rippling waters. As the boat speeds past some marshes, a group of ruddy shell ducks, some tufted ducks and a couple of common pochards tussle for the floating grains that the wind has blown in.

About 198.6 sq km of the wetland is under agriculture and much of the area is covered by grasses such as munj, kahi, bater, khabbal, dab and khas. Stands of shisham and acacia and other varieties of trees line the embankments. Dense floating beds of water hyacinth cover approximately 70 per cent of the lake, wreaking havoc with its ecosystem. 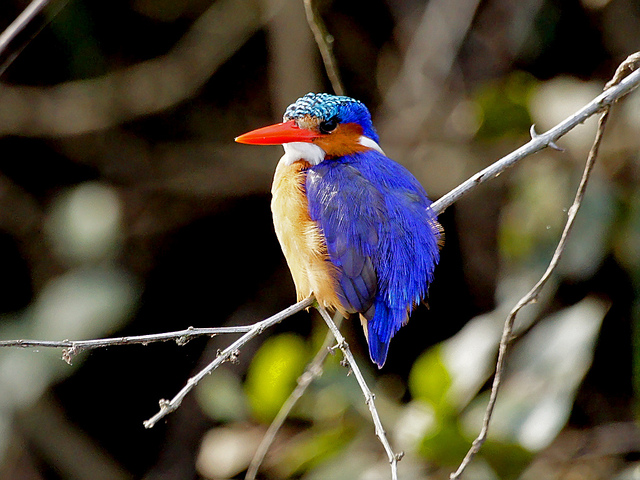 Officially, no fishing, agriculture, camping, shikar or grazing is permitted in the sanctuary area, but the adage ‘rules are meant to be broken’, rules. Or so it seems, as I watch buffaloes in the grasslands along the Beas Channel to the left. As we approach the confluence of the Beas and the Sutlej, the early morning sunlight slants upon the melding of the clear blue of the Beas and the black and oily waters of the Sutlej, heavy with the residue of industrial waste from Ludhiana and Jalandhar. It is a matter of growing concern that the pollution of the waters is continuing to impinge drastically on the birds, the fish and the vegetation at Harike.

The boat rocks mildly as the tempo of the water changes somewhat as we get closer to the joining of the two rivers. Leaving the Beas Channel we headed for the marshes closer to the Kapurthala District along the Sutlej Channel. The heavy silting, another major problem that has made this wetland a shallow lake, catches the boat and the engine protests.

As we finally pulled back towards the jetty, the boatman tells me to train the binoculars towards the distant horizon where a solitary Pallas’ gull, India’s largest gull, which sports a black head and black wing tips with white markings, wheels above the river. A little later the trained eye of the boatman once more searches the sky behind us. Osprey (macchlimar), he laconically points out. 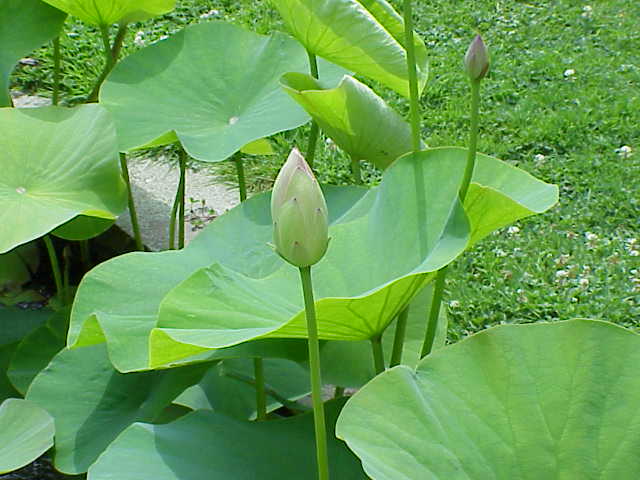 The boat put-puts swiftly over the warming waters, but by now the birds all seem to have taken refuge deeper in the marshes and the wheat fields beyond. Time to head home. With a bump the launch reaches the makeshift jetty. We pile into the waiting car and drive out onto the highway. All of a sudden there’s a flutter and a small posse of black-bellied terns take to the skies calling their plaintive terteer, terteer before slipping behind a passing cloud and a stand of shisham trees. Our spirits lift.

Location: At the barrage at the confluence of the Beas and Sutlej at Harike Pattan Distances 507 km NW of Delhi, 60 km SE of Amritsar Route from Delhi NH1 to Amritsar via Ambala, Ludhiana and Jalandhar Route from Amritsar NH15 to Harike via Tarn Taran

When to go; Oct to Mar Best sightings Nov to Mar, when birds fill the wetlands

Go there for Wintering migratory birds 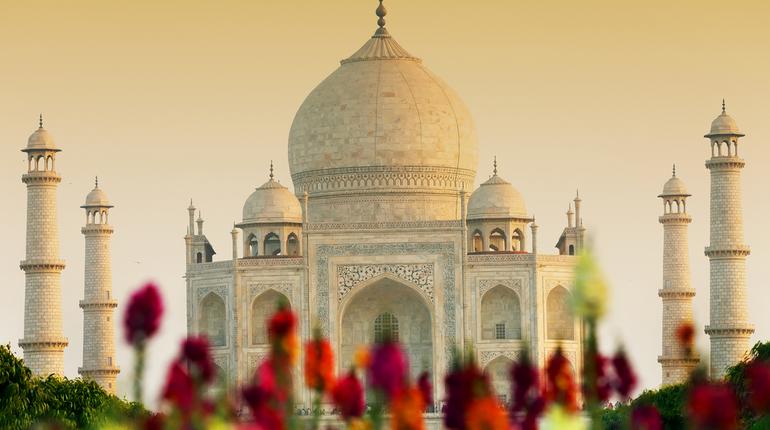