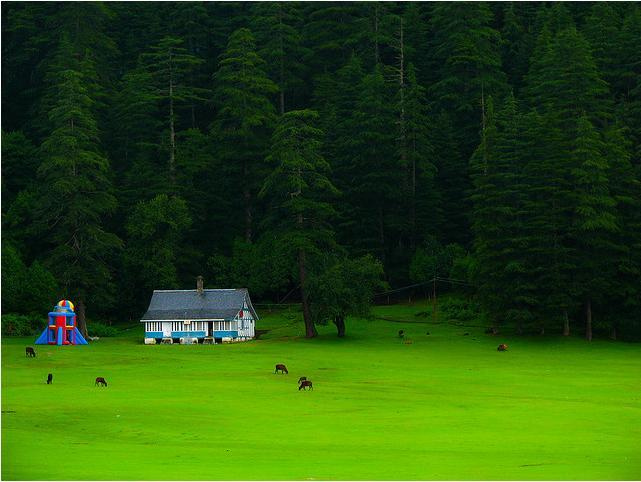 A beautiful planned town, Dalhousie is considered one of the healthiest spots in the Himalayas, and picturesque Khajjiar, lovingly known as ‘Mini Switzerland,’ is the latest adventure destination. Under the watchful snows of the Himalaya, Dalhousie is built around two hills that are girdled by a road in a figure of eight, with two main crossings — Gandhi Chowk and Subhash Chowk When I first planned to visit Dalhousie a long-time resident passed on a well-worn nugget about the place, “Don’t bother. There is nothing there — it’s just dull and lousy. It is empty in winter. A solitary man somewhere, a few mournful monkeys, the shops all locked-up, not a hot meal to be had and piles of snow not cleared.” Sounded terrible. “And it’s worse in summer”, he continued. “Not a hotel room to be had, blaring music louder than the blaring horns and no place to walk”. Sounded worse. Well, since the time I heard this, I’ve been in summer, I’ve been in winter and I’ve been in between. I’ve checked out the collars if not the socks.

Origin and History of the Town

And that take on the place name, ‘Dull-lousy” seems quite that. A take — especially when one already knows that the only swingers in the place are probably the monkeys in the trees. The town came into being when many of the hill stations across India had already found their roots. But this delay had a spin-off and Dalhousie, right from the start, was a ‘planned’ town. It is regarded that the idea to create the place was that of Lieutenant-Colonel Charles Napier, Chief Engineer of the Punjab. Napier (later Lord Napier of Magdala), went on to become the Commander-in-Chief of the Indian Army.

The town was intended to serve as a sanitarium and as a cool retreat for both the military and for civilians. In 1851, a selection was made of a spot on the Dhyankund ridge. The lowest spur, Kathlog, was considered as the most suitable place for convalescents. The report on the site was submitted to the Government of India in October, 1852 and the sanction of the Government of India for the land to be acquired was given in September, 1853. A committee was appointed to establish the size of land required and its boundaries. The five pockets of Kathlog, Potreyn, Tehra, Bakrota longbreak 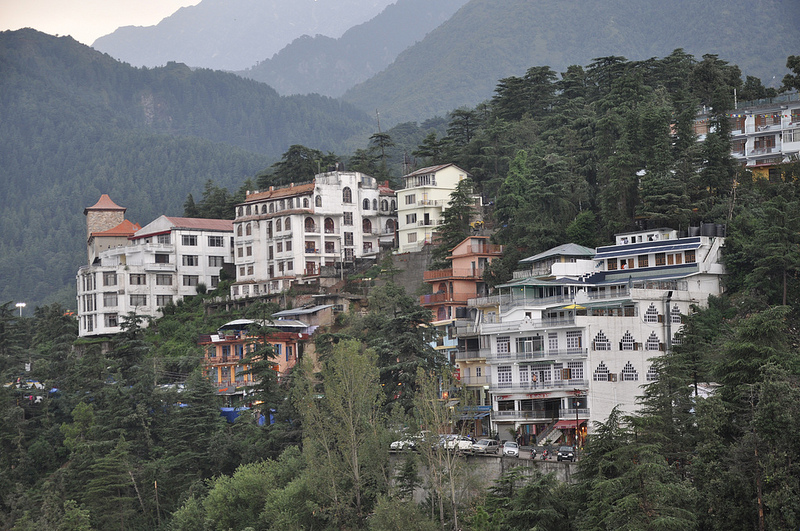 A Forest Information Centre at the Kalatop Sanctuary and Bhangora were identified. Balun was added later. A reduction was made in the tribute paid by Chamba — as the land belonged to that state. The final sanction of the Government of India was accorded in February, 1854. At the recommendation of Donald McLeod, Lieutenant-Governor of Punjab, the sanitarium was named Dalhousie in honour of the Governor-General, Lord Dalhousie.

There were about 400 plots for big bungalows and 400 smaller plots in the Sadar Bazaar for the support staff and shops. Clubs, hotels, libraries came up with private enterprise. Well over a century and a half later, it is this initial planning that has allowed much of today’s Dalhousie to remain unsullied and retain a large measure its old world charm where remnants of the Raj trickle along. Back in 1923, J. Hutchison in his guide to the area had categorically stated, “Dalhousie and Bakloh lay claim to being two of the healthiest places in the Punjab”. And lest any unhealthy infection worm its way into these salubrious heights, even in the 1960s, every visitor was innoculated before entering the town. Under the watchful snows of the high-Himalaya, Dalhousie is largely built around two hills that are girdled by a road that circles them in a figure of eight.

The two main crossings are the Subhash Chowk (once called Charing Cross, if you please) and the other, next to the post office, is Gandhi Chowk. And these roads are held high by tall stone revetments made venerable by a variety of mosses and lichens. Just above them are shrubs and ferns and wild flowers. Then come the trees — flowering rhododendrons, determined oaks, pines with turpentine scents and the deodars that have an almost indescribable majesty. Below, the wide valley tumbles down in fits and starts — with level patches for fields and houses. At the end of that long plunge, like a languid snake basking silver in the sunlight, flows the river Ravi. 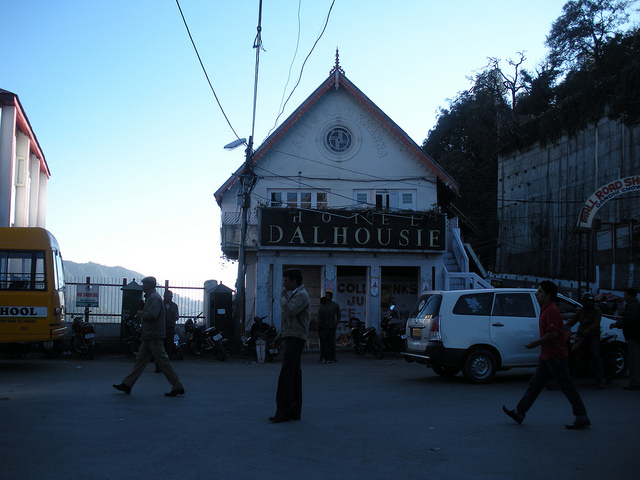 The Dalhousie has full-pockets of colonial architecture — little cottages and larger bungalows. The vanguard belongs to the churches — St. Andrew’s and St. Patrick’s are in the cantonment. The stone structure of St. John’s stands near the GPO and is the town’s oldest whose solid stone walls took the place of flimsy wooden planks after the Rev. Pratt visited the place in 1863 and exhorted the Christian community to something ‘more suitable’. The Catholic church, St. Francis’ is on a rise above Subhash Chowk and was built in 1894. This has an even tenor of dressed-stone on the facade and elaborate woodwork in rich, dark tones in the interior — and some remarkable stained-glass windows. The sightseeing attraction closest to Dalhousie is Panchpula, only three kilometres away. This holds an obelisk built in memory of the freedom-fighter, Sardar Ajit Singh. Around the memorial are a series of water pools with little waterfalls. 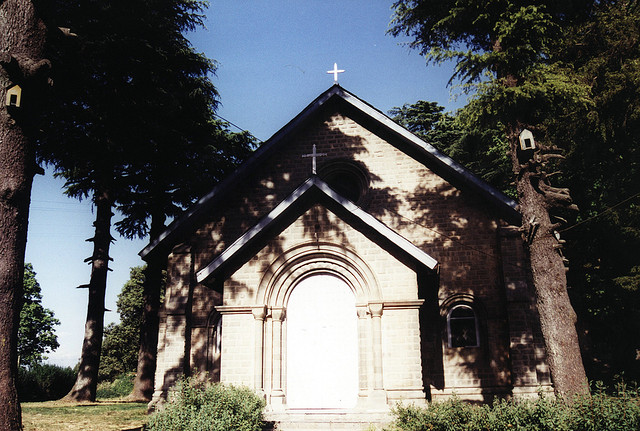 Of the many walk trails in and around Dalhousie, the Bakrota hills cover a fair bit of town and around. This is a walk of around five kilometres that encircles the Lower Bakrota Hill; the trail can be extended to encircle the Upper Bakrota Hill and can extend even longer to Dainkund, the highest point in Dalhousie. The walk starts at the Gandhi Chowk and along the northern face of the hill, goes past Subhash Baoli. 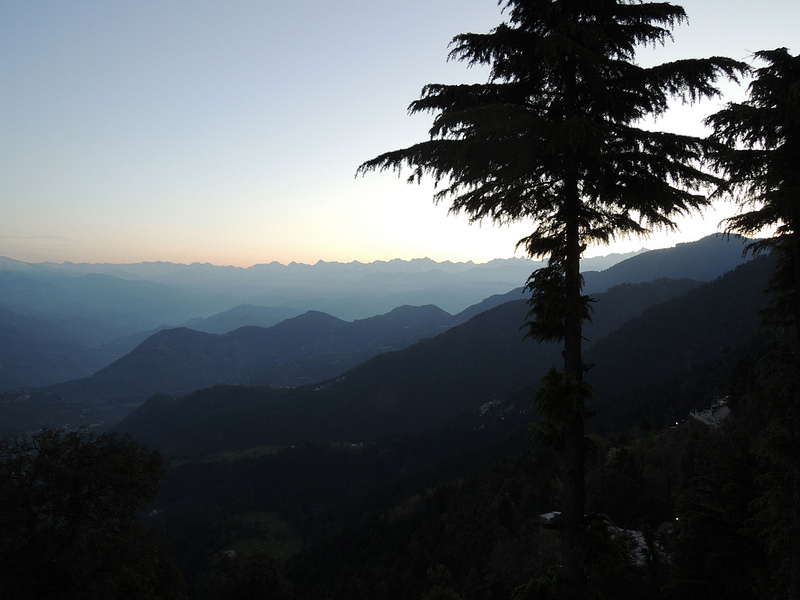 Noted freedom fighter and creator of the Indian National Army (INA), Subhash Chandra Bose spent a significant portion of 1937 in Dalhousie. He is believed to have walked and contemplated at this picturesque spot. Should you care to, carry on to Dainkund (about 10 km from Gandhi Chowk, mostly uphill) which, at 2,700 m, is the highest in Dalhousie and offers majestic views of the mountains.

The route to Dainkund turns off near the old Lakkar Mandi which was a settlement of charcoal makers. On a clear day, you can even see the three main rivers of the area the Ravi, the Beas and the Chenab as they flow in the distance.

The most famous spot near Dalhousie is the exquisite glade of Khajjiar (Switzerland of India). A series of streams feed a large pool in the centre, and on the fringes rise thick cedar forests that belong to the Kalatop sanctuary. Tattered fringes of the snow line frame this picture of pastoral beauty. 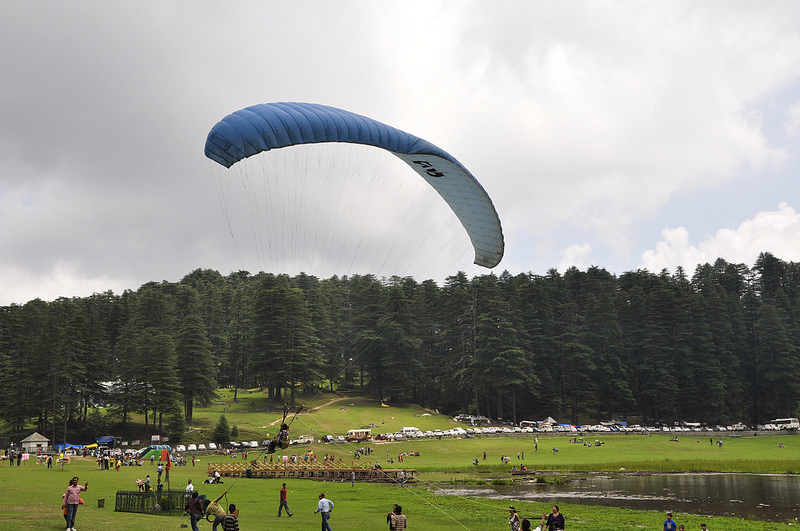 The legend of Khajjiar has it that a great sage once lived at this beautiful spot. One day, a powerful serpent, arriving there, liked the place and wished to make it his own. The sage tried to prevent this and a fierce struggle ensued. In the end the sage lost and had to give up the spot to the serpent. While conceding defeat, the sage declared, “Now you eat and you live — ‘Kha aur ji’”. And that is how Khajjiar is said to have got its name. The serpent is worshipped as ‘Khajji Nag’ and there is an attractive temple that enshrines an image at Khajjiar. The temple has a sanctum with an intricately-carved ceiling (though much of the fine woodwork is hidden by a coating of fumes); the ‘verandah’ before the sanctum has life-size carvings in wood of the Pandava brothers who are said to have visited this spot during their exile, an episode from the epic Mahabharata.

The Kalatop Wildlife Sanctuary surrounds Khajjiar. This rises from the glade to a point above the town of Dalhousie and in the other direction, goes down towards the valley of the river Ravi. The sanctuary covers an area of around 2,000 hectares (a little over 20 sq km) and within its confines, are a dozen little villages. These pockets of habitation share space with animals and birds like the serow, goral, yellow throated marten, leopard, black bear, barking deer, flying squirrels, monal, koklas and chakor. 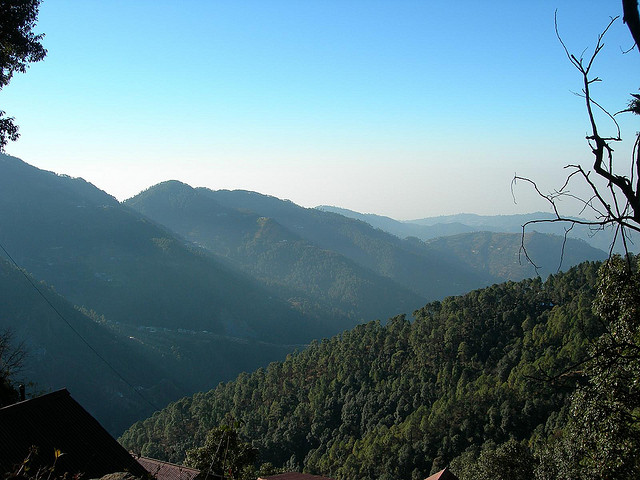 Photo by Sreenath H B

Must Visit attractions in Dalhousie

There are many stunning churches in Dalhousie like St. Andrew’s Church and St. Patrick’s Church at Balun, St. Francis’ Church at Subhash Chowk and St. John’s Church at Gandhi Chowk.

Go to the Tibetan Market for bags, dolls, handicrafts, carpets and purses. Himachal Handloom, situated on the Thandi Sarak, also adds delight to shopping. It is known to house a large collection of woolen shawls and handicrafts.

By air: As there are no airports in Dalhousie, the nearest air terminal from Dalhousie is located in Gaggal in the Kangra district, at a distance of 135 km. Amritsar and Jammu are the other nearby airstrips that can be availed.

By rail: Pathankot is the nearest railhead from Dalhousie. From Pathankot, a large number of trains are available to different cities of India. Once at Pathankot, tourists can hire taxis or buses, available at regular intervals, from here to Dalhousie.

By road: The place is well connected with other major cities of the region, with well-maintained roads. Dalhousie is 145 km from Chamba, 190 km from Amritsar and 235 km from Shimla. It has excellent bus service, offered by state transport departments and private tour operators. 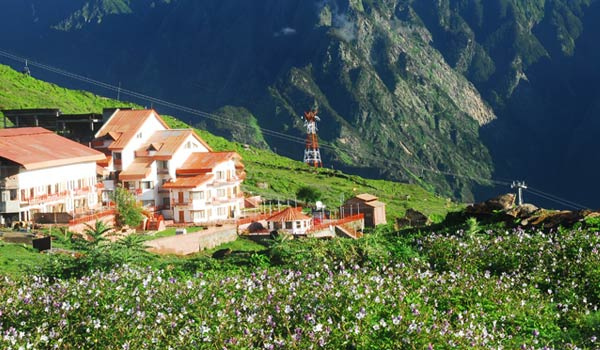 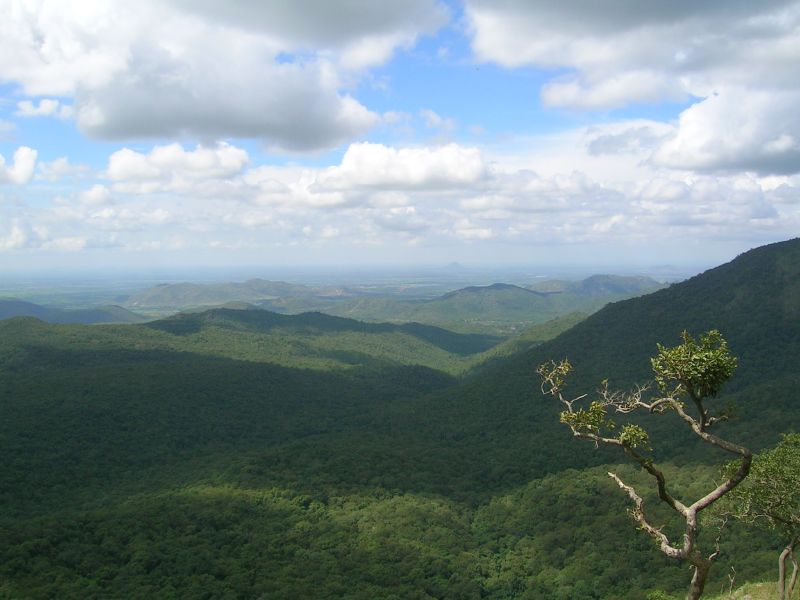 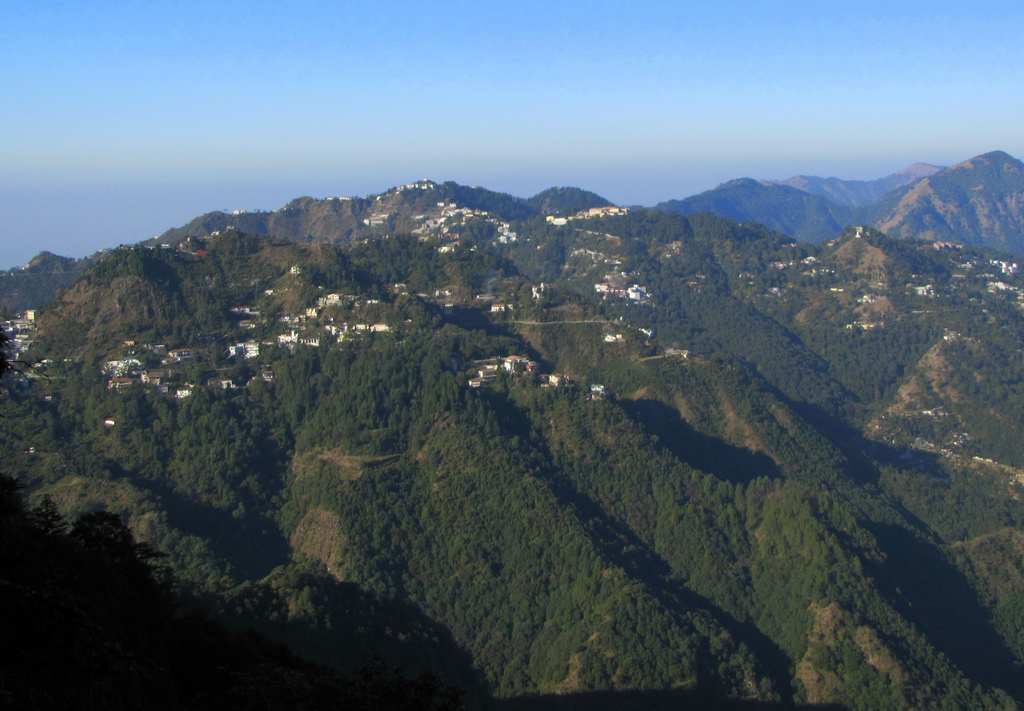